Newsletter
Sign Up today for our FREE Newsletter and get the latest articles and news delivered right to your inbox.
Home » The 1956 Bel Air Rag Taking Over the Vegas Strip 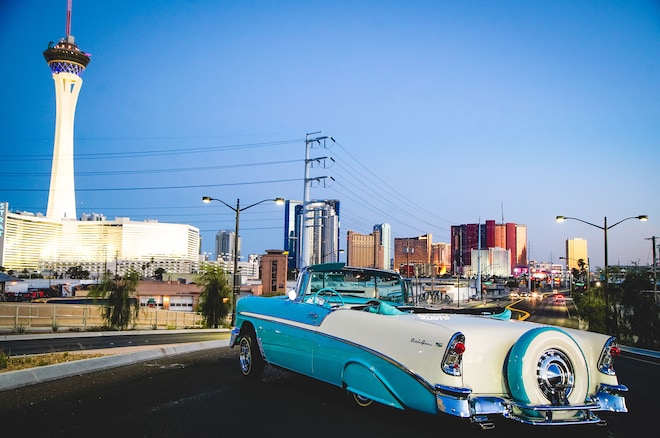 We all know that same old story when it comes to building a lowrider. Everything always seems to go wrong at the worst times. A project ride can get lost in car purgatory where they’re usually held up at the body shop, or body “shops.” Sometimes, no matter how much blood, sweat and tears you pour into a project, the car just refuses to be built.

Such was the case when a lowrider named Big Bill from Las Vegas, NV set out to build a 1962 Impala convertible. After piecing it together and experiencing major issues during the paint process, Big Bill took it all the way back down to paint and realized that the bodywork was shoddy and needed to be redone, yet again. As many car builders know, these roadblocks can wear a person down and leave you wondering if it’s all worth the pain and aggravation.

So, after yet another attempt to get his ‘62 out of limbo and being no closer to a finished project, Big Bill was at a crossroads. It was around that time that a friend of his named Lisle, who also happened to own a custom car shop, asked him to help find a buyer for a newly restored 1956 Chevy Bel Air. Lisle Helms, and his crew at Whipstyle Classic Auto had done a complete restoration on this classic beauty. As far as Big Bill was concerned, this ‘56 was just waiting to be transformed into a lowriding cruiser. Big Bill traded up his cursed ‘62 convertible, along with substantial cash, and essentially dug his way out of the car building perdition he was in.

First off, the ‘56 was sent to The Builder 702 in Las Vegas, who switched it over to fuel injection. He also installed a CVT Air Management system to keep the airbags as quiet as possible. To compliment the set-up, the trunk was color-matched to the originally restored interior. Lisle, at Whipstyle then took over to help turn this classic restoration into a cool lowrider with a Ridetech Suspension. Andre, at Intense Audio in Las Vegas, NV, installed a brand-new sound system. A set of 13” Daytons with color matched chips were the cherry on top for the smooth progression into lowrider heaven for Big Bill.

Despite the discouraging struggles he’d faced in his previous attempts to build a clean ride, Big Bill chose to take the high road and now he finds himself roaming the strip and taking over the downtown scenery that is Las Vegas, all while flying his Royals car club plaque.

We first met Ricky Persaud in New York City when we shot his 1964 Impala convertible. Since that time, Ricky has sold his 1964 and is now the proud owner of this gorgeous 1956 Bel Air convertible.