Newsletter
Sign Up today for our FREE Newsletter and get the latest articles and news delivered right to your inbox.
Home » 1956 Chevrolet Bel Air – The Myth of the ’56 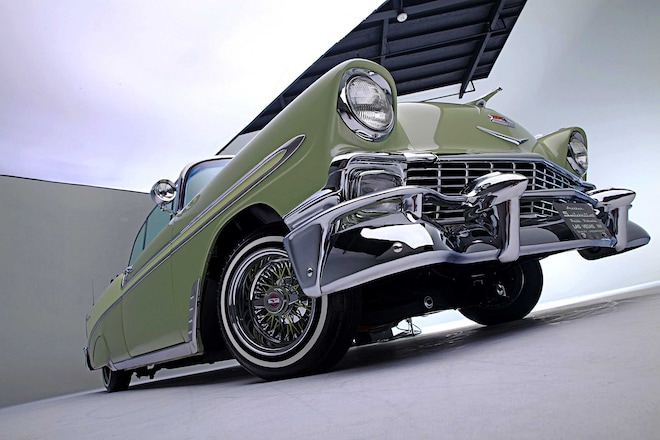 We’ve all heard tall tales about the one that got away—and we’re not talking women. Rather, we’re talking about classic cars. You know, the one original condition car that’s been sitting just miles away from your home. And while most of these stories end with the car making a quick get away to someone else, this time around the story ends different.

When Rick Bell was in search of a 1956, he told his good friend and employee David. Almost immediately, David began talking about the rumors that there was one sitting back in his hometown of Santa Rosa, California, so with due diligence he started making calls and tracking down the tale. Meanwhile, Rick thought it was too good to be true and probably some sort of urban legend—or a cruel fact of misinformation—yet he still kept hope.

After a multitude of phone calls, his buddy David was finally able to track down the owner; turns out he was eagerly searching for a new home for the car. With no time wasted, they shot over to Santa Rosa and there sat a true barnyard find that had been sitting since 1966. With minimal surface rust and a few rusted body mounts, the car seemed to shine with pride, so Rick purchased the ride and had it brought to Las Vegas.

“We picked up the car and it was complete, and running, but it still needed a full restoration,” David says. They had set a goal of rebuilding the 1956 in a couple of short months, and the end goal was to get the car to display at the infamous Las Vegas Super Show.

In light of that, the Bel Air was completely disassembled and every nut, bolt, and screw was removed. From there, the body of the car was sent off to TKO Customs to prep the bodywork. Once done, Greg Smith then laid a two-tone DuPont paint scheme that consisted of Laurel Green and Crocus Yellow paint. At the same time David disassembled the chassis, engine, and transmission and refinished every original GM bolt and bracket from the 1956. To help restore the suspension, David ordered all N.O.S. bushings and bearings for it and even tracked down an original N.O.S. exhaust system.

David also rebuilt the original 265 engine, powerglide transmission, and even the posi limited-slip rearend. “Everything is original from 1956 with the exception of the glass, Ciadella interior, front grille, and fender extensions,” David explains.

It took the duo (Rick and David) 92 days to completely restore the car. “I put the last screw in the morning of the Las Vegas Super Show and the drive to the Super Show was actually the rag’s first test run. “The car was never road tested, the brakes were never checked. In all honesty, Rick just jumped in, turned it on, and drove it to the show.”

While Rick made it to the show without any issues, the whole fiasco was one they never thought they could pull off, but in the end it was a test of their devotion to the project, and the ultimate payback was seeing it glide down to the show.

In closing, they want to give a special shout-out to Jorge Rojas who always dreamed of making it to the magazine but was unfortunate to not see the day. “He will never be forgotten,” David says.