Newsletter
Sign Up today for our FREE Newsletter and get the latest articles and news delivered right to your inbox.
Home » 1953 Chevrolet Bel Air Hardtop – Scraping By 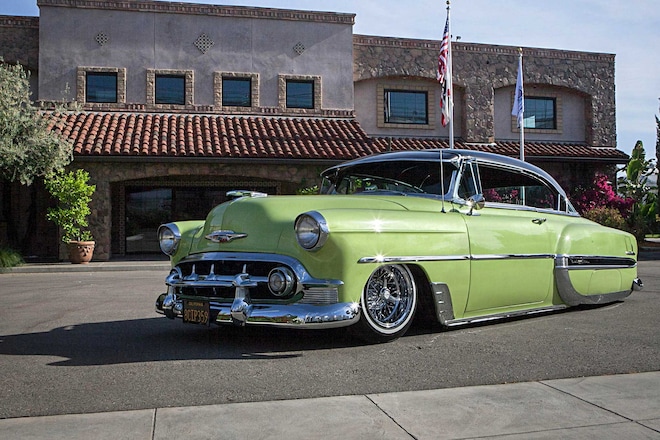 Marcus Vargas is no stranger to slamming his vehicles. He’s the “Do Whatever It Takes” kind of guy who isn’t afraid to cut a frame or raise the entire floorpan. He is also an extremist because low to him means the rocker panels are skimming stones on the asphalt, and among his ground-scraping creations are a ’41 Special Deluxe, ’35 Master, ’39 Master Deluxe, ’48 Fleetline, and a ’47 Fleetline he just recently sold.

This time around Marcus wanted to flip the script, so he set out in search for a ’53 Chevy Hardtop. After months of searching the web, he wound up empty-handed and that’s when a friend from Oldies Car Club told him about a ’53 Hardtop that was for sale in Porterville, California. The pair wound up taking the trek to look at the car, and by the end of the night, it was in his possession. The next morning Marcus started chopping the car and that’s when he installed a Jimenez Broz front suspension with C-notch and tunneled the floorpan to achieve that maximum drop. After he was happy with the results, he moved onto getting the car ready for paint and that’s where Marcus applied a Fiat Avocado Green along with two coats of Solar Gold Pearl. Once dry, he then cleared the car using all House of Kolor products while all chrome and stainless steel pieces were taken to Moreno’s polishing in Fresno, California. While Marcus worked on the airbag and stereo system, the leather and suede interior with contrasting green stitch was done at Antonio’s Upholstery in Fresno.

To keep the old-school look, Marcus threw on some Tru-Spoke’s wrapped in 5.20s, and after 10 months, the car was complete. In closing, Marcus would like to thank his friends and family who helped him throughout the building process including Eli Reyna, and most importantly, his wife, Gloria, for putting up with the crazy and intense build.