Newsletter
Sign Up today for our FREE Newsletter and get the latest articles and news delivered right to your inbox.
Home » 1951 Chevy DeLuxe with a Lowrider Flare 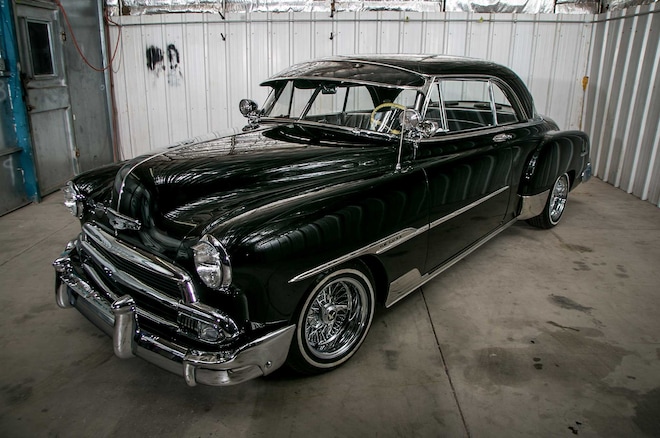 It is 1951. Our now beloved I Love Lucy show was making its television debut and the groundbreaking color television was beginning its first test broadcast. It is this timeless moment in American history that Armando “Mando” Gonzalez, of Yuma, Arizona, wanted to recapture with his recently purchased 1951 Chevy DeLuxe. “I wanted to bring it back to as close to original as possible,” Armando says, “but with a little bit of that lowrider flare, of course.”

With a solid canvas to work with, Mando took on the task of the bodywork himself. The custom two-stage Midnight Black paintjob, as well as custom charcoal roof patterns, were laid down by Orlando of Perfect Color in Indio, California. Jose, of Krazy Kutting, would install the semi-original black-on-black interior. Beto, a close friend, would help out with the Sony Audio head unit and complete audio system. Sinister cross-laced 14×7 wire wheels were installed along with all the chrome plating for the finishing touches. With this project nearing completion, it was finally time for the heart and soul of this car to be rebuilt by Mike, of Mike’s Motors in Yuma. There, he would bring this car back to life by reassembling the original 1951 Chevy small-block. With all the hard work behind him, and feeling that “old-time” nostalgia, Armando found himself cruizing around looking for the nearest drive-in, just like they did back in 1951.