Newsletter
Sign Up today for our FREE Newsletter and get the latest articles and news delivered right to your inbox.
Home » 1949 Chevrolet Styleline DeLuxe – A Classic Affair 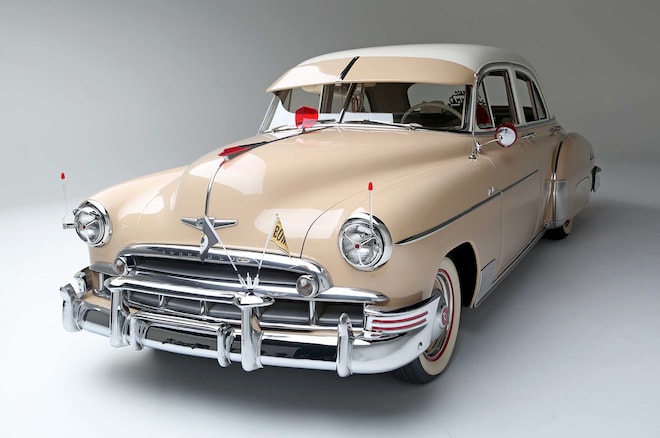 Like most 14 years olds, Butch Rodriguez had a lot of interests; but when he placed eyes on his cousin’s classic Chevy, it was game over. In an instant, he became obsessed with ’40s-era Chevys. That appreciation soon turned into an obsession, and from there it turned into a goal—one he achieved in the early ’90s when he found his dream car, a 1949 Chevy Styleline DeLuxe.

He found the car in a local newspaper ad and went to take a look. The owner explained to Butch that he had plans of passing it onto his son, but his son didn’t want it. With just a few rust spots and good overall condition, the car was a keeper, so Butch walked away with it for $1,400.

Good enough to drive but not good enough to show Butch opted to restore the car to its original condition, a task that took him four years to accomplish. Years later, he’d find himself doing a second renovation, taking an additional five years.

The second rebuild started by taking the car to Jerry Himebauch Auto Parts and Service. They removed the original 216 engine, had it rebuilt, fine-tuned, and dropped right back in. The bumpers, grille, and moldings went to San Joaquin Chrome, while David’s Auto Body performed all bodywork. From there a two-tone paintjob was laid out with Axalta PWG Dodge paint (on the body) and a cool vanilla up top.

“I built the car to drive it, show it, and cruise it,” Butch says, but even more important to him are the memories attached to the vehicle. His most memorable being the time he took his father to the Bakersfield Show, which was his father’s last show before his death. Now as he looks off to his future he’s hoping to pass it onto his own son in high hopes he has better luck than the last owner.