Newsletter
Sign Up today for our FREE Newsletter and get the latest articles and news delivered right to your inbox.
Home » 1949 Chevrolet Fleetline – Slow & Steady 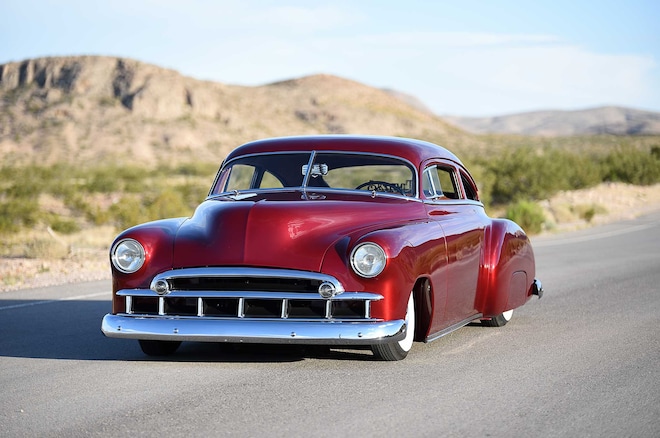 Every build comes with its own trials and tribulations, and Kensie Vuong knows this all too well after spending 12 years creating what you see here. It all started a while back when Kensie and his wife spotted a 1949 Chevy Fleetline Deluxe at the Pomona Swap Meet. He sent his wife over to negotiate the deal, and after working her magic, the car was had for $4,300. The car was pretty much together with the exception of the motor that was still sitting in the crate. Once he got it back home, he tore it all down and that’s when he got sidetracked by the restoration of a 1959 Vespa.

Once the Vespa was complete, it was time to get back to the ’49 and that’s when he brought it in to have the top chopped. After waiting 18 months, the car was returned chopped and primered, but something didn’t sit well with Kensie, so he had the car sandblasted. His suspicions were correct as the work he paid for was definitely not up to par. From there, Kensie was frustrated with his findings, so the car sat for another year until he reached out to Matt Townsend. Matt was straight up and told Kensie that he was better off getting a donor car as the roof was not salvageable. Within a week, a donor car was found and the heavy work got started. Matt rechopped the roof 31/2 inches, peaked the hood, pancaked the trunk, and made some one-off taillights mounted in the rear bumper guards.

Once the metalwork was completed, the car was brought back to Nevada where Kensie entrusted Divine One Customs to throw in a list of mods including power windows, a Rockford Fosgate stereo system, and an AccuAir setup. The car was then painted in Lexus Matador Red. The color not only suits the car well, but it really comes alive when the sun hits it. Kensie built this car for his family and it took some determination to finally complete this beautiful ride. The car was built very meticulously and attracts attention everywhere it is driven. You can catch him and his daughter at the shows and gatherings all over Las Vegas.