Newsletter
Sign Up today for our FREE Newsletter and get the latest articles and news delivered right to your inbox.
Home » 1949 Chevrolet Fleetline Deluxe – Por Mi Padre 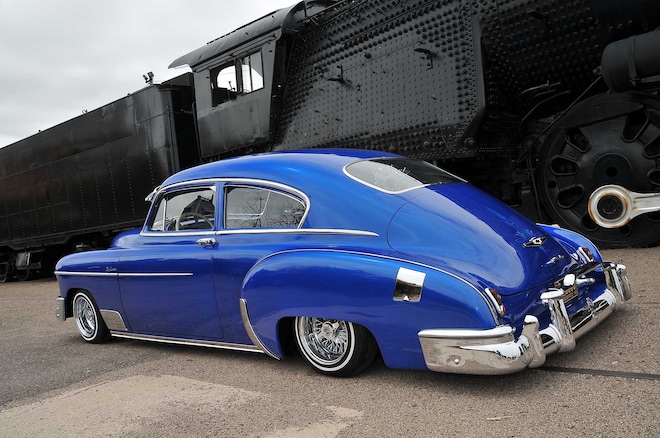 They say the measure of a man’s life is gauged through the eyes of his father, and while our fathers instill the need for guidance and teach us to be men, mothers also play a pivotal role in mentoring us during our youth. Just ask Chuck Gonzales, of Pueblo, Colorado, and he’ll tell you firsthand that his father has taught him plenty, and along the way, taught Chuck about the value of classic cars and the heritage and roots of lowriding. When Chuck was just six months old, his father, Charlie, purchased a 1949 Chevy Fleetline Deluxe that he wanted to restore. In 2005, Charlie passed away from Leukemia and the car was never finished. At that point the car had remained in storage until years later when Chuck decided to dig it out.

Located at a hot rod shop in the same neighborhood, Chuck pulled the Fleetline out. “The Chevy was off the frame, there were missing pieces, and it wasn’t anywhere near being completed,” Chuck tells Lowrider magazine. Chuck began assembling his team to prepare for a complete rebuild. The first step was putting the Fleetline back together, so he brought it to his friends Julio and Joe for the bodywork. Luckily, the only metal that had to be replaced was the driver floor and everything else was in pretty good condition. It was then that the frame was painted and the body bolted up.

With the primered body mounted, it was the perfect time to switch colors, so Chuck enlisted Alex Aranda to coat the Chevy in a mixture of PPG blues. George Weldon was brought in to add his pinstripe work on the front and back to accentuate the colors. Back in ’84, Charlie airbrushed a mural of downtown Pueblo on his trunk, so Chuck contacted airbrush artist Tom Stack to add a custom mural. The mural was added to the sunvisor depicting Chuck’s father in downtown Pueblo where he was often seen riding his motorcycle and lowrider cars.

The Chevy was still not road-worthy as it didn’t have a motor, and luckily Chuck’s friend (and Rollerz Only club brother) was selling a Chevy 327 out of his ’64 SS ragtop, so Chuck scooped it up. Chuck and his friend Anthony handled the V-8 swap with the turbo 350 transmission. With the motor in, a G-body rear end was installed as well as a Mustang 2 front suspension which added rack-and-pinion steering and disc brakes. Tony Langloss added the Magnaflow exhaust completing the heart on the Fleetline.

The next step was bringing the stock suspension to the ground by way of hydraulic setup. Chuck contacted Sal Sanchez, a long-time friend and excellent car builder, to handle the install. A Hi-Low whammy setup was added to the trunk with three Deka batteries hidden behind the deck as well as four-link and bridge. A tubular front suspension was added to the Fleetline as well. A three-switch panel was mounted under the center of the dashboard to handle the basic moves bringing the Chevy closer to the ground. With the trunk coming together, Chuck brought the Chevy to Drive In Auto Sound where Justin installed a full stereo setup that includes two JL Audio subwoofers and amplifier mounted in the trunk floor. A JVC head unit was installed inside the glove compartment so the dash wouldn’t have to be altered. Chuck had one last thing to add for finishing touches, so he found a National Chevy leather kit in Minnesota and brought it to Rick Gallegos for the install. Classic Instrument gauges were added to replace the older ones. A Con 2R steering wheel with a stainless steel column was mounted inside, and a Lokar shifter rounded out the interior upgrades.

Chuck took something that’s been in his family since he was six months old and brought it full circle to what it has become today. Chuck wishes to thank all his good friends involved in the build, Ralph, Anthony, Carlos, Angel, Bear, Matt and the rest of the Pueblo Rollerz crew. A special thanks goes to his mother, Peggy, for her support as well as his girlfriend, Veronica. Chuck wants to show his daughter Alysia how family stays strong and can overcome any adverse situation. The tribute to his father has deepened Chuck’s love for the lowrider culture and confident his father is smiling from above with pride.