Newsletter
Sign Up today for our FREE Newsletter and get the latest articles and news delivered right to your inbox.
Home » 1949 Chevrolet Fleetline Deluxe – The Promise 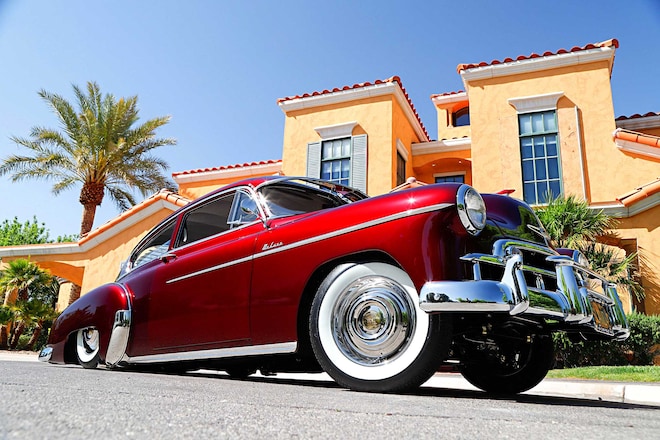 It’s 1969 and the tumultuous ’60s are coming to an end. It was a decade where everything seemed to be turned upside down. From an escalating war to the Woodstock music festival to a man walking on the moon, all of these events were just part of the nightly newscast for Frank Sinclair whose only concern at the time was finding a way to put gas in his 1955 Chevy Bel Air. Soon, however, Frank’s world was turned upside down when Uncle Sam drafted him. Shortly after the calling, his Bel Air was sold and the paved streets of Glendora, California, were exchanged for a life in the military.

Life went on and over the years Frank found himself surrounded by a growing family. Every year, he and his family eagerly attended their annual family reunion. Hosted by his cousin, Darlene, the highlight of each party was the time he spent admiring Darlene’s car. A car that reminded Frank of the days he used to spend cruising his Chevy. She had long since parked her 1949 Chevy Fleetline DeLuxe, which for years had been sitting in her barn. It was a literal “Sunday Driver.” The car belonged to her grandmother who really did drive it on Sundays, and for 15 years each reunion would end with Frank putting the cover back on and heading home. Soon that all changed. He pleaded with Darlene to sell him the car and told her that it would always stay in the family. Reluctantly, she agreed to the deal knowing that Frank’s son Jared would eventually care for it.

With the Chevy finally in his garage, the four-year restoration began. The heart and soul of the vehicle is a GM 350 crate engine mated to a 700-R4 transmission with overdrive and ceramic Sanderson headers. The exterior is bathed in House of Kolor’s candy Brandywine with the interior completely gutted and renovated with a custom one-piece rear seat covered in gray vinyl with red and gray pinstripe stitching. Final touches come by way of airbags for altitude adjustment, polished chrome, and wire wheels. Once complete it was time to bless the ride with a family cruise. During its maiden voyage his wife rode shotgun—then again that shouldn’t come as a surprise as Frank says with a smile, “My wife has shotgun for life.”

Body/Paint
House of Kolor candy Brandywine over a black base