Newsletter
Sign Up today for our FREE Newsletter and get the latest articles and news delivered right to your inbox.
Home » 1949 Chevrolet Deluxe Styleline Reimagined In Lowrider Form With Artillery Wheels, Air Suspension & Modernization 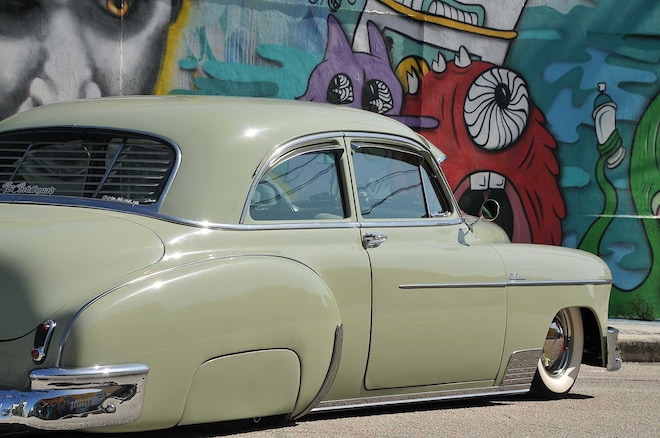 From 1941 to 1952, Chevy dominated the market with their Deluxe model, but in 1949, they released the Deluxe Styleline which cost $1,492 – a deal by today’s standards, but at the time, a relatively decent price for a luxury vehicle. Ask Ralph Herrera, he’ll tell you firsthand.

Prior to Ralph owning one, it was nothing more than a dream and while lowriding was in his blood, he had never before owned anything that symbolic. “I wanted something to enrich my roots a little deeper,” Ralph tells LRM, “I found a ’49 Chevy Styleline Deluxe online and it just spoke to me.” Shortly after making arrangements, he arrived at the location in Homestead, Florida, and what he found was a beaten and dilapidated Chevy sitting in the backyard. But even with the paint faded and chrome shot, Ralph knew there was potential and purchased the vehicle.

With a seized motor and tranny, Ralph knew he had a ton of work ahead of him and he got right to it and started by rewiring everything under the hood. From there he changed the spark plugs, tossed in a new distributor, added a new carburetor, a fresh ignition system and even a new exhaust. Once it fired up, Ralph wanted to see if he could save the paint so he wet-sanded the car, buffed it and repeated the process a good ten times before he was happy with the results.

Inside, the vehicle was rewired and he added a modern fuse box while converting the Deluxe to 12-volt so he could switch to a larger battery, thus allowing him to switch to an alternator instead of the generator. The next step was changing all the glass to green glass. In the 40’s, Chevy used carpenter nails to hold the panels on so Ralph switched it up by using clips.

Once the electrical inside the Styleline was spot on, he had Hialeah Plating take all the trim off to have it stripped and chrome-plated while stainless-steel parts were re-polished. To give it the ground pounding stance of a lowrider, he enlisted Florida Hotrods (Hialeah) to install a full Accuair E-level air ride suspension. The stock wheels were replaced with a set of 15-inch Artillery wheels he pinstriped and painted to match. Inside, most of the parts had to be recovered or replaced as parts were difficult to source.

In its final form, this is one bomb you have to see to believe and the work put into this ride is not only a labor of love, but a part of the process that keeps us attached to tradition. But you don’t have to tell Ralph because he knows this all too well as he’s often found cruising with his wife Erika and their kids Jonathan, Kaitlynn and Emily.