Newsletter
Sign Up today for our FREE Newsletter and get the latest articles and news delivered right to your inbox.
Home » 1949 Cadillac Sedanette – Comfortable Cruiser 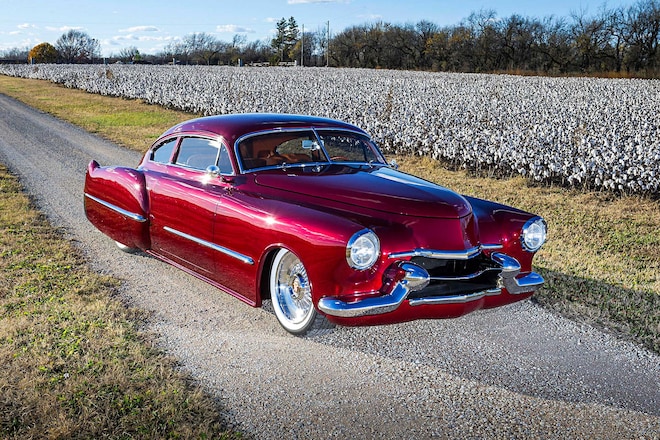 As a kid, Bruce Conwell’s playground was the auto shop originally opened by his grandfather in 1928. In the ’60s, he built go-karts and mini-bikes and helped his father work on cars. When he was 10, he helped rebuild the engine on a 1957 Oldsmobile, re-machining the heads by himself. After hearing the finishing engine start, he was hooked on cars for life. His first car, at 16, was a 1955 Chevy wagon. Since then, he has owned a large number and variety of cool cars, including street rods, muscle cars, kit cars—nothing is outside the range of his interest. As years passed and he got closer to retirement, he felt the urge to get back into street rodding. The 1935 Ford coupe he bought was fun for in-town cruising and short trips but what he really wanted was a comfortable cruiser.

Bruce says he’s always been a fan of the Cadillac Sedanette, and had an image in his mind of what Cadillac engineers in 1949 might have built if they had access to today’s technology. He talked to Chris and Drew Carlson—who had worked with Bruce on the 1935 coupe—about blending the Cadillac’s classic styling with modern tech. An eBay search turned up a 1949 Sedanette from the San Francisco area—a complete, cosmetically satisfactory car with the original engine and transmission, a repairable amount of rot, and perfect potential. It came with the 1949 owner’s manual, a copy of the original invoice, and a photo of the car when it was delivered to its original owner, actor Adolphe Menjou, who had ordered it with a load of options suitable for a Hollywood movie star.

The body design evolved as Bruce, Chris, and Drew developed ideas and by the time the car was finished there wasn’t an inch of sheetmetal that hadn’t been modified. The top was chopped 2-1/2 inches in front and 5 in the back. B-pillars were leaned forward and the driprails were reshaped. Two to three inches of sheetmetal was added all around the bottom of the body—at the rear quarters and doors, at the front quarters behind the reshaped wheel openings, and below the shortened decklid and taillights. The quarters were welded to the body and door handles were shaved. A bead rolled edge was added to the lower rockers, around the front wheel openings, and along the top of the rear bumper.

At the front, a 1955 Cadillac bumper was cut in 30 places to get the right shape and fit. The stock grille trim was eliminated and replaced by a 1946 Cadillac grille bar. The stock hood was welded and recut to create a smaller sports car-style hood, which was pancaked and radiused. The nose was extended 12 inches and peaked. The 1956 Olds headlights and rings were raised 2 inches. At the other end, the stock taillights were flush fit to the body and the license plate was frenched into the extended sheetmetal. The bumper was lowered to align with the side trim, and notched and bead rolled around the exhaust tips. Along the sides, custom skirts were added, handles were shaved, and the art deco-style side mirror fabricated for Menjou was replicated with a pair of Hagan mirrors on custom chrome stems. When the body had been modified and prepped to perfection, Chris Carlson sprayed the candy red paint, custom mixed using Martin Senour paint.

The 18×7 billet Sabre wheels with Cadillac caps from Circle Racing Wheels and low-profile 215/55 R18 whitewalls from Diamond Back Classic Radials are the perfect combination of rolling components to complement the car’s reproportioned traditional look.

The engine compartment was beautified, with a custom smooth firewall and inner fenders painted body color, and a silver and gold engine cover. A new LS3 is hidden underneath. Dual K&N air cleaners filter the air going to the Edelbrock fuel-injection system on a cross-ram dual throttle body manifold, while 10.7:1 hypereutectic aluminum pistons and powdered metal rods work the nodular iron crank. Gases are expelled through Corvette headers into a MagnaFlow 2-1/2-inch exhaust system corked with XL Performance Mufflers. A Spal electric fan and Be Cool radiator cool the coolant delivered to the engine by an Edelbrock water pump. The LS3 was installed by CCHR with final tuning performed by Chris Lovett and Wichita Dyno. Testing showed 401 hp at 6,406 rpm at the rear tires; the torque reading was 392 lb-ft at 4,775 rpm. Chance Transmissions in Wichita assembled the Chevy 4L85E with a SuperMatic torque converter, modified with extra clutch plates, increased fluid pressure, and a firmer-shift valvebody. Inland Truck Parts supplied the aluminum driveshaft.

Bruce worked with Walt Curry at Walt’s Upholstery in Mulvane to design the interior. The dash, modified at CCHR, features a Bedwood curly maple panel that circles the interior. Dakota Digital created a new instrument cluster to fit inside the renovated original housing. A leather-wrapped CON2R Series One steering wheel was customized with a Cadillac trunk emblem horn button and mounted on an ididit column.

Curry modified a pair of heated and cooled seats from a 2016 Mustang GT350 and created rear seats from scratch. The leather upholstery is a combination of squash and cinnamon hides, in smooth and perforated textures. V emblems were added to the upper seats. CCHR built the console. The head unit for the Kenwood GPS/phone/audio system and Vintage Air control knobs are surrounded by a custom bezel featuring backlit, stencil-cut Cadillac script. Power window switches, cup holders, e-Level, air ride controls, and seat temp controls, can be hidden by a sliding cover; a linear actuator allows opening and closing with the touch of a button.