Newsletter
Sign Up today for our FREE Newsletter and get the latest articles and news delivered right to your inbox.
Home » Rescuing A 1948 Pontiac Torpedo In The Name Of Lowriding 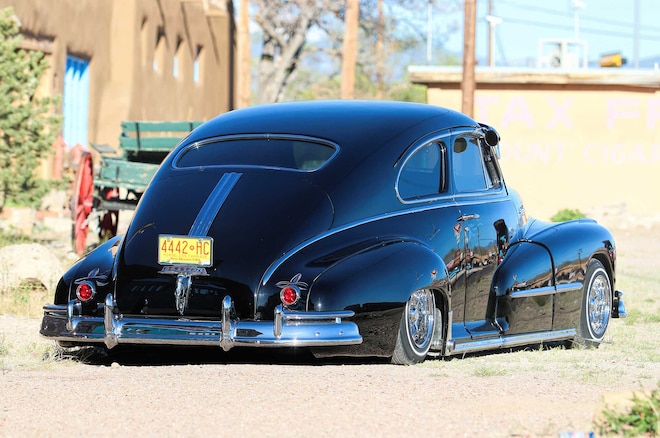 When you see Johnny Martinez Jr. standing alongside his 1948 Pontiac Torpedo and, at a glance, he may look like any proud owner of a clean lowrider bomb, but there’s so much more to it. Like many lowrider enthusiasts, he has a story to share and it started off like many who caught the lowrider bug as a kid.

Growing up, Johnny Jr. was constantly by his father’s side as he built cars, so when it came time to build a ride of his own, he didn’t call a shop, he called his pops. Knowing he wanted to build a bomb, Johnny Jr. set out in search of a ‘48 Fleetline, and that’s when his friend told him about a possible option stashed down the street. Johnny Jr. wasted no time and what he found was a rough Pontiac Torpedo missing plenty of trim. He already knew searching for these parts was going to be a task, but that did little to stop him from negotiating and after a few minutes, the deal was done, and the car was towed to his father’s house. Once there, Johnny and his father got the straight 6 running and after a few cruises, they decided it was missing too much trim to keep on the road.

After attending the annual Good Friday cruise on Espanola’s Riverside Drive, a decision was made to do a complete tear down to get the car looking right. After pulling the body off the frame, Johnny Jr. went to work and installed a Camaro subframe as well as a 4-link rear end complete with an air ride set up. Meanwhile, his dad reworked a small block 400 as well as the drivetrain.

Having little to no luck  finding the missing trim pieces, the duo went to work fabricating much of what was missing. During that time, Morfins body Shop got the body straight for the Jet black color, while B&M upholstery replaced the interior. A Vintage Air AC keeps the interior chilly while a set of 13×7 Tru Spokes complete the car and give it the proper look and feel to have both father and son cruising the streets of New Mexico and keeping the family tradition alive and well!