Newsletter
Sign Up today for our FREE Newsletter and get the latest articles and news delivered right to your inbox.
Home » 1948 Chevrolet Fleetline – Trust The Process 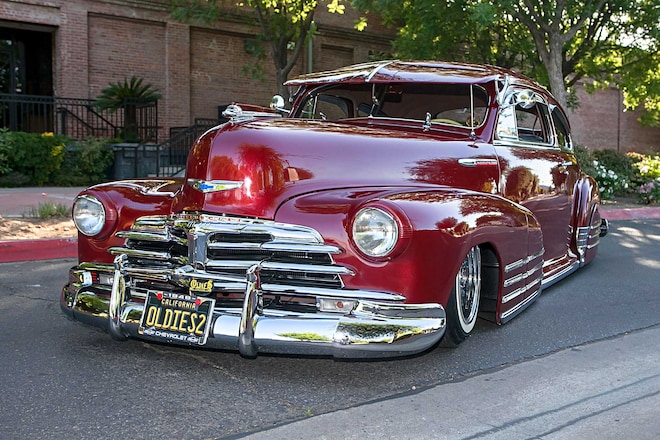 Who remembers the days of auto shop in high school? You know, the class that taught you how to wrench while teaching you the intricacies and inner workings of a car. Aside from the practical knowledge, these classes taught students that their ideas could be turned into reality. It gave them a sense of belonging as well as pride in their own handiwork. More importantly, these classes helped develop and further nurture some students’ passion for cars—and David Orozco was one of them.

While taking a “Body and Fender” class in high school, his love and appreciation for cars developed into something even greater. Fast-forward to present day and it’s safe to say that he’s been busy building his dreams. As a member of Oldies Car Club since 1996, David has already built nine custom cars—four of them being 1948 Fleetlines. But after selling one of them, he needed to fill that spot, so he picked up another 1948 that was sitting at a local shop.

Thinking this was going to be like any of his other builds, he started the teardown process and that’s when he realized the subframe was done incorrectly and the motor was no good. This type of news would have sent most into limp mode, but not David. He went straight to work and found another frame and along with it installed a Mustang II front clip with a rack-and-pinion and disc brakes. Out back they mated a four-link to a G-body rearend, and since the truck was apart they C-notched the frame, giving him the ability to lay the truck down to the ground.

Matthew Adney performed all the bodywork/paint and once it had been cured, cut, polished, and buffed, it was time to snap in all the refinished chrome pieces done by Meclec Metal Finishing. Knowing the motor was no good, he decided to upgrade the powerplant with something more powerful, so he opted for an LS1 engine. To address the interior, he brought it to Antonio’s Upholstery where they installed a Le Baron Bonney interior kit while custom sounds were installed by Marcus at Cali Beats.

Now complete and fully dialed in, David can sit back and enjoy his latest creation, but ask him about the build and he’ll be the first to admit that at times it did get overwhelming. In the same breath he’s quick to point out that nothing comes easy and understands that building a custom car is all about patience, persistence, and perseverance. It’s also a battle of time and money, but above and beyond all those factors, David recognizes that the most important part of building a ride is your support system, so David would like to send a special thanks to Richard Ortega, Marcus Vargas, and especially his wife, Bea, for her patience.