Newsletter
Sign Up today for our FREE Newsletter and get the latest articles and news delivered right to your inbox.
Home » A German Helmet 1948 Chevrolet Fleetline Classic Bomb called “Capone” 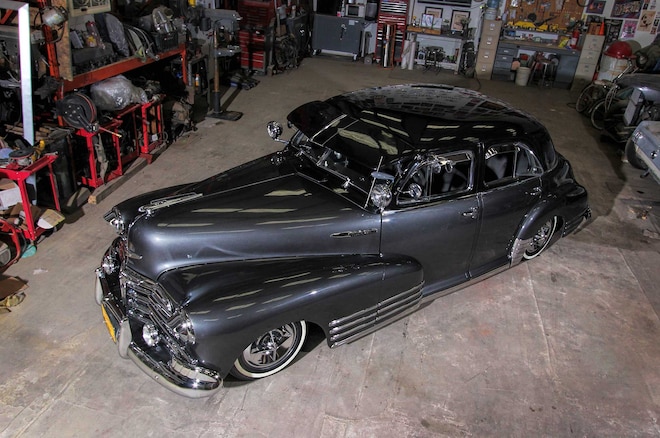 This 1948 Chevrolet Fleetline is owned by Joe Demny, a man who, by all definitions, is a car guy. As a serious car enthusiast, he’s either looking at them or working on them and he will often find himself called upon as he is both an accomplished pinstriper and welder.

The Fleetline, often referred to as a “German Helmet”—because of the trunk areas resemblance to a German helmet—is an integral part of automotive history. It’s adored by classic car lovers and a common site in lowriding. So, how did Joe end up with one? Well, years back, Joe had grown bored of his ’59 Fairlane, so he scoured the Web looking for a new project. His search produced a German Helmet located in Lynwood, Ca, and he immediately called the owner. Feeling a certain vibe, Joe then pre-negotiated the deal without seeing the car in person. Joe offered the owner his ’59 Fairlane, with cash on top, and the owner agreed.

After getting the car home, he drove it for a few months while collecting accessories under the advice of his friend Jaime Trujillo&mdsh;an old friend who Joe refers to as, “a walking encyclopedia on classic cars.” Sadly, Jaime passed before the vehicle was done.

One day, while trying to figure out an electrical issue, Joe got fed up and decided to tear it down for a complete rebuild. It didn’t take him long to get the job done, as his sons Alex and Xavier were eager to lend a hand. While the car was disassembled, Joey started mocking up the hydraulics and wound up notching the rear four inches to ensure the vehicle would lay low.

After this was complete, he did the bodywork himself before the top was doused in black ice metallic and the fenders a gunmetal grey. Once the clear was dry, he scuffed up the dash, trunk, and radiator cover and dropped them off with Mike “Airdesign” Mirabal, where he misted some murals.

After many long nights, the car was just about done. Joey rebuilt the engine, added a Fenton dual carb set up with straight pipes then sent it over to Rudy “The Bomboligist” Ortiz for a tune. Montoya’s Upholstery was responsible for addressing the interior, and now it’s not only a running vehicle but the mothership responsible for taking his family on local cruises and car shows.