Newsletter
Sign Up today for our FREE Newsletter and get the latest articles and news delivered right to your inbox.
Home » 1947 Pontiac Streamliner – Black Dahlia 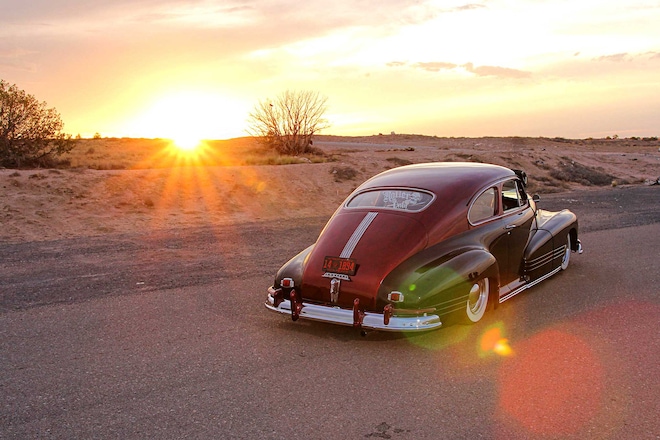 This 1947 Pontiac Streamliner you see here was not Knievel “Snake” Jeffries first choice when it came time to pick a classic to fix up. He actually picked up this car from a guy in Colorado to flip. But while putting the car back together, he fell in love with it and decided to keep it for his own. Snake is a Mechanic by trade, so getting the original straight 8 purring again wasn’t a problem. But the bodywork and paint didn’t come that easy. Even though Snake had always been into painting, it was graffiti not car paint. He would even go out with his crew sometimes and go “Bombing” in his bomb. Well back to the car paint. He called upon an old tagger friend Solvent 888 to do all the bodywork and paint the car black and he drove it around for a while like that. But as with any other project, it was time for a change. He called on fellow Rollerz Only club member Sean Daly at Straight Street Automotive for the next step. Sean brought the car in, sanded down the roof and laid down a layer of flake. Then proceeded to lay out patterns and fades over the entire roof in Kandy Apple Red and Wild Cherry.

While the paint was drying, Sean and his crew installed an all new Hydro setup complete with accumulators to get the ride and the stance just right. They also sent off the grille and bumpers to get chromed and to powder coat some accents. With all this stuff going on outside he decided to upgrade the interior a little as well. He took the car over to another old friend, Joe Martinez at Joe’z Shop to re-wood grain the dash and garnish moldings. The seats and the rest of the interior are still all original. Last but not least, Snake wanted to add a sweet sound system, but the stock 6volt had to be upgraded first to 12 volt. After doing this, Snake didn’t want to cut up the dash, so he built a custom stereo and speaker enclosure out of an old make up case that sits in front of the front seat. He also added a couple 10’s in the back to feel the music a little better.

As with any project, it is never really done. But for now, Snake is just happy cruising his Pontiac all over Albuquerque.