Newsletter
Sign Up today for our FREE Newsletter and get the latest articles and news delivered right to your inbox.
Home » 1947 Chevy Fleetmaster Convertible – A Higher Power 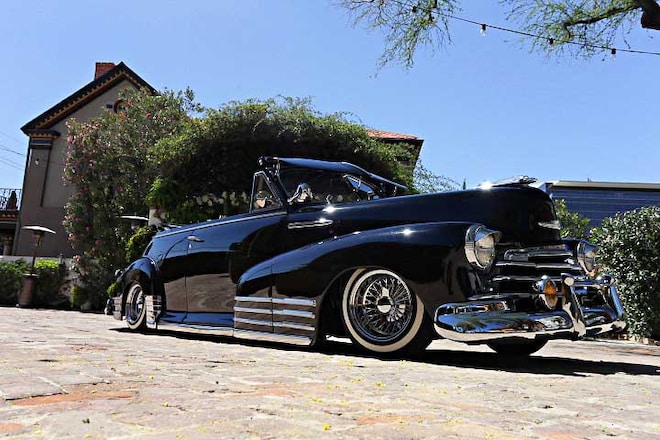 After building a 1941 coupe, a 1948 Fleetline, a 1939 Packard, two 1938 Chevys, and a 1939 Oldsmobile, you’d think one would take a break from customizing, but not for lowriding enthusiasts Enrique Orrantia. A classic car collector and restorer since the ’90s, Enrique found himself wanting to build yet another project. This time around he wanted to build a convertible and that’s when he set out to find one of the most desirable classic cars in the game: a 1947 Chevy Fleetmaster.

As a member of Old Memories Car Club he’s more than familiar with the process of building classics, so he began with an extensive search. That ultimately led him to an unmolested and unrestored car, and according to Enrique “it was the perfect canvas.” With just minor bodywork required, the car was ready for paint in no time. For this particular build he went with a semi-custom look.

The exterior was covered in a Jet Black and then doused with gallons of show clear by the guys at Tomas Body Shop. The interior was revamped in velour Camel Brown, and just like any bomb build the hunting down of accessories is mandatory, and Enrique’s 1947 would eventually be fitted with dual spotlights and a Fulton visor, just to name a few. While the vehicle’s frame still remains original, the suspension was upgraded with a four-link Mustang II suspension mated to a custom airbag setup installed by Enrique himself. The heart and soul of his latest undertaking is a 1970 small-block Chevy 350, chromed out and then outfitted with a dual Flowmaster exhaust.

“I’ve been blessed to be surrounded by a great support system,” Enrique says, when discussing all the builds he has completed. But he is also quick to point out a higher power as he follows up by saying, “More importantly, I would like to say thank you Lord for making all this possible for me.”