Newsletter
Sign Up today for our FREE Newsletter and get the latest articles and news delivered right to your inbox.
Home » 1947 Chevrolet Fleetmaster – Golden State Bomb 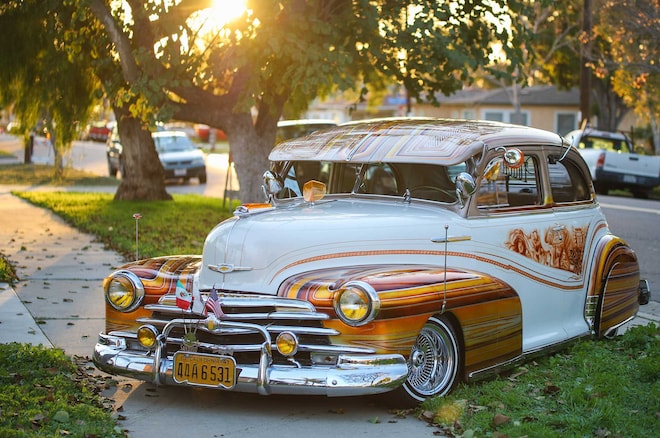 It all started with model cars. As a young boy, Henry Llamas of National City enjoyed building model car kits of his favorite classic rides. Since he wasn’t old enough to drive yet, it was the closest he could get to touching the pedals. Henry developed a deep appreciation and love for the lowrider lifestyle over the years and hoped to spread the same feeling to others. Henry founded ‘Diego Style Bike Club’ to keep young kids out of trouble. He taught them how to customize lowrider bikes and other life lessons along the way.

During this time, Henry stayed busy by customizing his own cars, including a 1968 Chevy Impala SS. Even though this was his favorite ride, there came a day when it was time for Henry to say goodbye and move onto the next project. Henry came across a 1947 Chevy Fleetmaster that was sitting and wasting away in a Spring Valley, Georgia garage. So he struck a deal with the owner and traded his Impala for the Fleetmaster.

Over the next four years, Henry turned what once was a neglected hunk of metal into the vintage lowrider bomb of his dreams. He worked very hard on it, too. He re-built the engine that once belonged to a 78′ Nova, installed the popular Black Magic hydraulics, and even painted the entire car three times until he settled on its current palette, champagne and pearl white. An eye-catching Aztec mural hand-painted by Jon Wilmont graces the rear side of the beautiful bomb. In the future, Henry plans to chrome the engine to complete the show car look.

Since completion, Henry has cruised his ride to many car shows where he has earned numerous awards. He thanks his wife “cookie” for supporting his love of classic cars and sharing the same interests.