Newsletter
Sign Up today for our FREE Newsletter and get the latest articles and news delivered right to your inbox.
Home » A 1947 Chevrolet Aerosedan That’s All Business 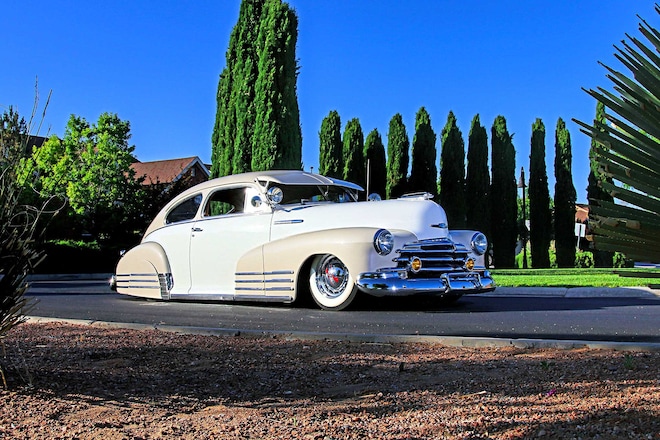 You see 1947 Chevrolet Aerosedan and you have to take a closer look. That’s because post war Chevrolets are a favorite among the lowriding community, and when it comes to the Fleetline, well, that’s the bomb of choice and something held near and dear to our hearts. In 1947 they accounted for 71% of all Chevrolet sales and it’s the perfect platform for bomb enthusiasts who want long, flowing lines and plenty of chrome accents. Among those patrons is Gary Herrera. Over the years he’s had his fair share of classic cars but when he came across a 1947 Chevrolet Areosedan in Minnesota, he jumped at the chance to own it.

The car featured 23,000, all original miles and upon receiving it, he cruised it as-is. It had faded paint and old chrome so he decided to have it revamped. The chrome was sent out to AZ for a re-dip, while Manny Morphin sanded down the old paint and applied a fresh coat of PPG Tan pearl and an off white color. J.J. and Louie Griego were enlisted to get the car’s ride height a little closer to earth, so using a narrowed rear end they installed a Jimenez Brothers lowering kit and complete air ride set up. To keep some of the original nostalgia intact, Gary decided to leave the all-original interior as well as the native 216. With the car cruise-worthy, you can often spot him cruising the streets of Chimayo with his wife in this beautiful classic Chevy.

Body/Paint
Tan and and off white