Newsletter
Sign Up today for our FREE Newsletter and get the latest articles and news delivered right to your inbox.
Home » 1946 Chevy Fleetline Aerosedan – A Gift to Celebrate 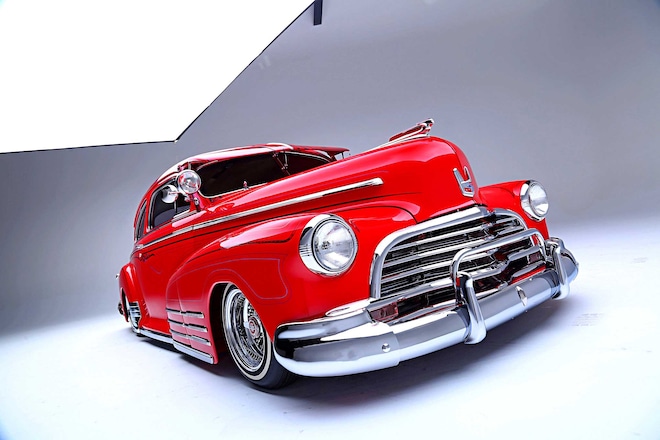 Celebrating your 50th birthday is a milestone. Often referred to as the Golden Jubilee, there’s good reason to celebrate, especially with a wife like Elena Cota. You see, her husband Enoc has been a fan of lowriding but had never owned one. So, with his 50th birthday approaching, Elena wanted to change that and recruited the help of her nephew (a member of the Oldies) to help her find a project car. They found a 1946 Fleetline in Whittier, California.

In need of a full restoration, her original intention was to have it completely redone but she soon realized that something as unique as a lowrider required his input to make it truly his. Upon receiving his gift, the couple began an epic journey of sourcing qualified talent. Enoc would be the first to admit that it just wasn’t that easy. Adding, “At times, I would get discouraged and just wanted the car done.” But then says, “The build to me was like life with its ups and downs, and if God can restore our lives then, I thought, we can restore this car.”

They began by having fellow club member Rudy do all the bodywork and then lay down a Viper Red color. Curly then added the patterns and striping, C&S Autobody installed the airbag setup, while California Custom Upholstery dropped in the leather interior and sound system. In all it was a four-year build where Elena and Enoc spent a whole lot of time together, but in the end it was an experience Enoc will never forget. He not only created the ride of his dreams but forged some solid friendships along the way.

Interior
Saddle-colored seats in leather and suede with red piping