Newsletter
Sign Up today for our FREE Newsletter and get the latest articles and news delivered right to your inbox.
Home » 1941 Pontiac Torpedo – In Loving Memory 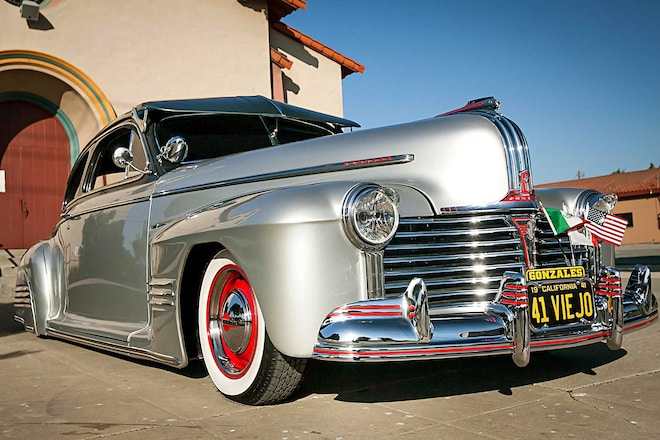 Raised and groomed around the car scene, Juan Delarosa was the son to Guadalupe Islas, a mechanic who was fond of involving his son in builds. As time passed, Guadalupe began looking for a father-son project they could work on together, so they took a drive out to Soledad, California, to check out a 1941 Pontiac Torpedo, a car that belonged to Juan’s godfather.

Upon their arrival they asked Alex Munoz if he had any intentions of keeping or restoring it. With the motor seized and completely torn apart luck was on their side, so as Munoz gazed at the parts he agreed to part with it. Happy that the deal was done, the bomb was towed back home but the project was put on hold. Tragically, Juan’s father died sometime after and the Pontiac sat up until his son could find the motivation to start on it.

As a memoriam to his late father, Juan finally mustered up the energy to commence the project. He remembered his father telling him that the car was somewhat of a rarity and a model that was specific to that year only. Knowing that gave him even more pride in the vehicle but little did he know how hard it would be to find parts for a single-year model. Piece by piece he collected everything he needed; his compadre Junior Vasquez was by his side for the six-year process.

To get it running, they first installed a 5.7 Chevy engine with a 350 turbo transmission and 1963 Impala rear differential. This was done to make the car more reliable and fun to drive and in addition they added a full stereo and air ride to give it a ground-hugging stance. Manuel Martinez then had the task of making sure the bodywork was straight. After hundreds of hours of laborious bodywork it was finally ready to be splashed with a blend of charcoal gray mixed with Lexus silver metallic. Painter Porfirio Martinez then buffed and polished the ride to absolute perfection.

Adding some accents to the final project came by way of pinstriping by Eddie Padilla while Hector Islas did the chrome accents. Inside, Garcia’s Auto Upholstery covered the interior in gray cloth while the Pontiac’s 15×6 artillery wheels were made by Wheel Vintiques and wrapped in Coker Radial whitewall tires.

In the end, the vehicle was finally named “Querido Viejo” and was built in loving memory of his father. With all the helping hands involved, Juan would like to thank his wife, Christine, and daughters, Alexis and Jenesis, for their patience and understanding on what is now the latest member of their family and one that represents the man who showed him the way.