Newsletter
Sign Up today for our FREE Newsletter and get the latest articles and news delivered right to your inbox.
Home » 1941 Chevrolet Special Deluxe – Mi Bombita 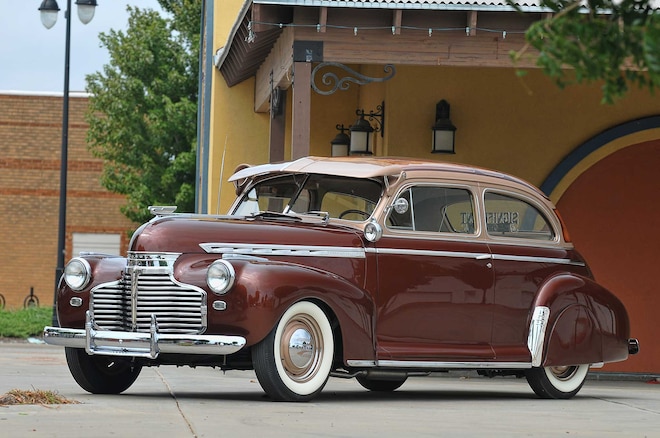 There is a completely different lifestyle between the standard lowrider enthusiast and the lowrider bomb enthusiast. Anyone can find a G Body or Cadillac to cruise with but finding a well-conditioned lowrider bomb is almost certainly a challenge for most. As a child, Jose Ceballos didn’t find his way into the lowrider culture until one day on the way home from school. “I was walking home and I saw the coolest car I ever saw,” Jose tells LRM, “I ran to the corner where he was stopped and asked him what it was.” After a few seconds talking, the owner of the car handed a young Jose a Lowrider Magazine and from that day he was hooked.

His first lowrider vehicle came in 1991 when he purchased a Chevy Blazer and added the standard wire wheels and paint and cruised his local city of Wichita. After getting married and starting a family, Jose felt he should elevate his interest in the culture that had become a second nature. Jose knew what he wanted, and kept his eyes opened for months for a specific vehicle. Eager to explain what he wanted it wasn’t until he was driving home with his wife Melissa when they noticed a Chevy bomb driving the other direction. Jose quickly pointed it out and said “That’s what I need!” Melissa had remembered one of their friends was selling a Chevy bomb so the trip home was immediately diverted to the friend’s house.

Within minutes of arriving and a quick look over the 1941 Chevy Special Deluxe, Jose was behind the wheel with his wife following him home. The condition was average with a few rough spots. The exterior was a solid black and the interior was a few different colors due to many attempts at customizing it. Instead of proceeding from where it was, Jose decided he would rebuild everything from the ground up. The first step was enlisting his friend Ariel Araiza at Araiza’s Automotive to add a new suspension to the Deluxe. Leaf springs and disc brakes were added to steady the classic Chevy evenly.

From sitting for quite a bit, the motor needed a full tune and oil change to get it properly running. Once drivable, Jose turned his attention to the most important aspect, the exterior. His good friend Jose de la Rosa had a paint booth behind his house and was known for solid custom paint work. The rust issues were all taken care of, by replacing all the damaged metal to new sheet metal and coats of Martin Senour Mocha Pearl and Satin Beige took over the once black body of the Chevy.

While the Deluxe was in the booth, every piece of dull chrome was removed and sent out to Speedy’s Metal Finishing for solid chrome plating to bring all the accents back to showroom new. All the motor pieces, battery cover, tissue box inside and the spotlight were engraved to add a custom touch. The next step was bringing the mismatched interior back to life. Juan Ibarra at New Era Rides Interior recovered the seats and added all new padding. Brand new carpeting was laid down to match the new themed color. The sagging headliner was removed and redone in brown. A retro AM radio was added to the interior to emulate the nostalgic feel back in 1941. Jose found a swamp cooler from a local swap meet in Wichita and added it to the passenger window for the air cooler inside the cabin.

Jose remembers the day that he first met that guy on his way home from school. He has made it his goal to show the youth, including his children, how to instill a sense of passion and effort into everything as he has in his Chevy Deluxe. Jose wishes to thank his wife Melissa and his children for their support and making his dream possible. A special thanks to his good friends Ariel Araiza, Jose de la Rosa and his car club Significant One for always pushing him to exceed expectations. Mi Bombita has brought Jose and his passion even further than he ever imagined he could be.