Newsletter
Sign Up today for our FREE Newsletter and get the latest articles and news delivered right to your inbox.
Home » 1941 Chevrolet Special Deluxe – Lowriding: The Ultimate Addiction 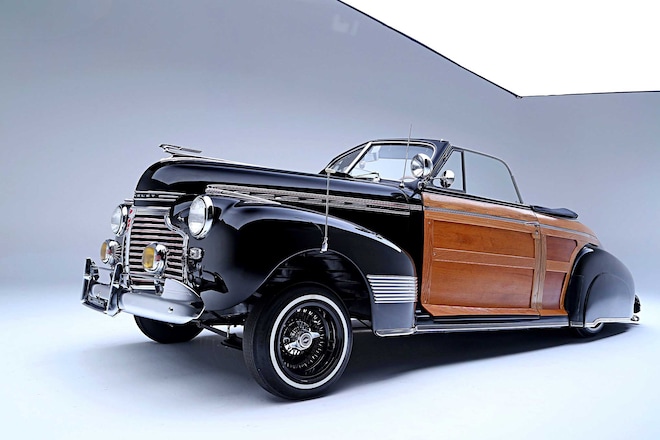 Ron credits his mother for his addiction to lowriding, and while speaking with him, it was interesting to hear him reminisce about his mother purchasing a new 1974 Monte Carlo from Felix Chevrolet and then adding a set of Cragers. “After that I was hooked,” says Ron. By the time he was 15 years old, he got a summer job in downtown L.A. The job helped him save up enough money to purchase a 1965 Impala which he fitted with a set of Tru-Rays. His mother encouraged his passion by helping him get a paintjob and phantom top.

Fast-forward some time later, Ron found himself at the Pomona Swap Meet selling car parts when he decided to go walk around the car corral. He immediately noticed a ’41 Special Deluxe and was drawn to it. He began talking to the older gentleman that owned it and found out it was a 15-year-old rotisserie restoration. Ron was really interested in purchasing it, so they went out for a spin. Upon their return, the owner told him he wanted $50K, but Ron could only offer $45K. “He turned it down and told me he didn’t want to take anything less than that,” says Ron. He couldn’t afford to pay the owner what he wanted, so Ron left the owner his number in the event he would change his mind. Three weeks later, Ron received a call from the owner who settled for his $45k offer.

Once he got the Special Deluxe home, he wanted to see how mechanically sound it was, so he drove it to L.A and back from Temecula. “I drove it 75 mph all the way and had no problems with it.” The following week, he took his family out for cruise to get some ice cream and the differential went out, so he took it to his club brother Alonso Guerrero to have it repaired. Alonso repaired the differential and while working on it, he noticed a light engine knock. Not wanting to risk anymore mechanical problems, Ron just had him rebuild the engine.

Now that the ’41 was mechanically sound, it was time for Ron to customize it to his liking. He began by ‘bagging it, adding powdercoated wire wheels, redoing the seats in black leather, and changing the top to convertible. The final thing was to have Gus from Viejitos add the wood paneling. Once he did that, he took his mother and 99-year-old grandmother for a cruise. Ron said, “The cruise took my grandmother back to the ’30s and ’40s when she was a young adult. The cruise really made her day.” Unfortunately, his grandmother is no longer with us.