Newsletter
Sign Up today for our FREE Newsletter and get the latest articles and news delivered right to your inbox.
Home » Lowered 1940 Packard Convertible Marque 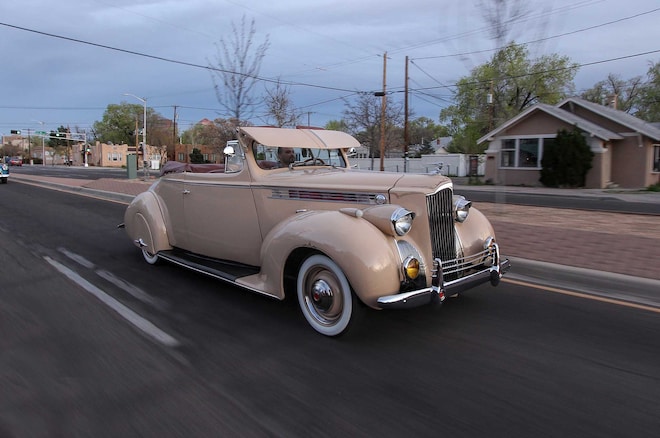 This 1940 Packard convertible serves as a Marque of American luxury automobiles. Produced in 1899 out of Detroit, the brand lasted until 1956. They were built for the wealthy or those that could afford a price tag four times greater than that of other cars of the same era.

The 1940 110 convertible you see pictured was Packard’s answer for the everyday man, and was necessarily built to aid in support of the company bottom line until better times returned, due to the depression. The lines and detail styles of the “top of the line” Packard have always appealed to Lowrider Bomb afficionados, especially New Mexico’s, Chris Florez.

Chris came across this convertible from a friend’s word of mouth, and was told the car was in good condition. He would go on to purchase it, sight unseen, over a phone call with the previous owner. Once the car was picked up, transported and delivered, Chris knew it needed some love but was well worth the investment.

The car was taken to Showtime detail for a full paint correction in a PPG tan color that matches well with the Packard’s dark maroon interior. The car then went to Blast Pin stripping for some added-on body lines and accents to enhance the rare automobile’s luxury styling.

Chris can’t leave anything stock, of course, so he lowered the car but kept it looking era correct. As he continues his search for rare Packard accessories to add on to his eighty-year old investment, he regularly cruises the downtown roads in lowered luxury, partaking in the New Mexico sun.

Candies and flakes are cool but a unique single-colored candy can beat any multicolor paintjob, and a real, true pearl can do the same to any candy

Growing up, Randy Perez was no stranger to the vices of being a young adult, but it never stopped him from exploring his options.

SEMA is full of unique/concept rides but this 1958 Packard Concept was above the herd.

With a half dozen bomb builds under his belt you would think Enrique Orrantia would take a break, but instead he set his sights on one more project.

Lowrider Truck of the Month Brought to You by Brothers