Newsletter
Sign Up today for our FREE Newsletter and get the latest articles and news delivered right to your inbox.
Home » 1940 Chevy Master Deluxe – Making the Move 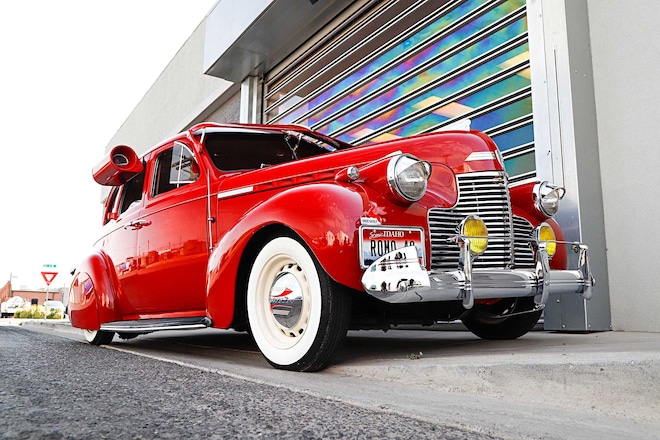 We never know where life’s journey will take us, but we always know where it all began. The same holds true for lowriding. When it comes to lowriding there’s no telling if we’ll forever be infatuated with a certain car model, and we may even forget some of our greatest moments riding the boulevard, but the one thing we’ll never forget is how it all began.

For Michael Romo lowriding became an endless journey of risk and reward, but as a kid he vividly remembers just how it started. Looking back, he’d ride his bike on the driveway of Lowrider Hydraulics. At the time his bike was his main source of enjoyment but he soon realized a better calling. From the smell of hydraulic fluid to the passion that engulfed the shop, the influence of his surroundings soon had him graduating from two wheels to four.

His first lowrider was a 1976 Caprice Classic and he’s since bought, built, and sold a good number of other models. But it wasn’t until his family moved to Idaho that his lowrider story really began to unfold. Now, when you think of Idaho, images of custom paintjobs or vintage bombs are the furthest things from your mind, but that was exactly what Michael set out to change. This California transplant is doing everything possible to change the culture in Twin Falls, Idaho, and since arriving he’s definitely set the bar, along with the help of friends Luis Cuevas, Sam Banda, and Ruben Urena.

His valiant efforts were recognized and rewarded and soon enough given the stamp of approval to start up an Idaho chapter of Viejitos Car Club. Along with his 1940 Chevy Master Deluxe, he took to the streets in a campaign to raise awareness and he’s accomplished more than just that. In his very first car show he won Best of Show, and since his arrival the town’s never been the same. And while his journey is far from over, he’s certainly left his mark on the Idaho lowrider scene, and we can’t wait to see how this blossoms into something beyond our imagination.