Newsletter
Sign Up today for our FREE Newsletter and get the latest articles and news delivered right to your inbox.
Home » 1939 Chevrolet Master DeLuxe – The Bomb 39 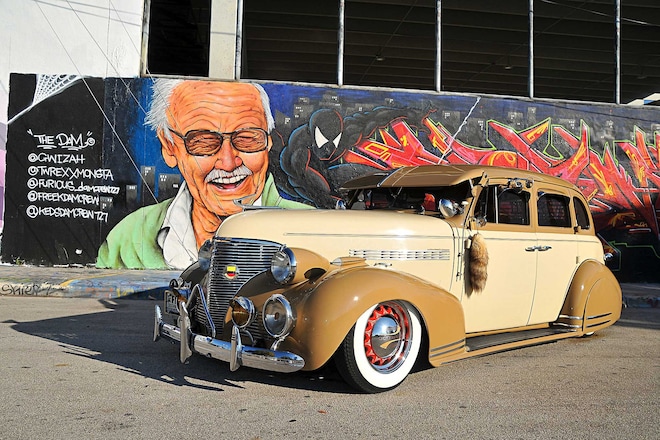 With four features under his belt, Carlos Cruz has certainly paved his way as a role model in the community. In his teens, he hit the boulevard with one of his many G-bodies. In his twenties, he elevated the game to Chevy Impalas, achieving his first feature in LR with a 1959 Impala. Then he followed it up with a second feature on his 1964 Impala. In his thirties, he received his third feature with a 1957 Bel Air, and now that he’s in his forties he decided to change the game up once more.

After traveling to the Torres Empire Show in 2011, Carlos fell in love with the bomb lifestyle. “We don’t have many bombs back in Florida,” Carlos says, “and there was something about the style and sirens that got me.” Among all the bombs in attendance, his favorite was the 1939 Master DeLuxe. He fell in love with the front grille and suicide doors and once he returned from the show his enthusiasm was strong enough to make him get a 1939 tattooed on his stomach.

After selling his lifted Excursion, the time came to up the ante. “It was time to make my dream a reality and grow up. It was time to find my bomb,” he says. And that’s exactly what he did. During his search, Carlos was able to locate a bomb that had been retrofitted with Mustang front suspension and rack-and-pinion. It was a great improvement over the stock suspension the vehicle once came with, so he put in an offer and waited patiently for the transaction to go through—a process that took about two months to secure.

Once it arrived at the house, he cracked open the side door of the enclosed trailer and fell in love with the bodylines and colors. While waiting for the car to arrive, Carlos did what most of us do: bought a ton of accessories. The build was something Carlos wanted to keep under wraps, and he did so because he wanted this build to make an impact. With only his father and wife in the loop about the vehicle purchase, Carlos began by dressing up the 350 with new valve covers, a Holley fuel pump, a Tuff Stuff starter, a new water pump, and Edelbrock intake and carburetor combo.

The Master DeLuxe didn’t come with the siren that first attracted Carlos to the bomb lifestyle so he purchased a Mars Commander and mounted it on the frame inside the passenger wheelwell. For the interior, Carlos wanted everything to be period correct, so he spent months researching all the beloved options for the 1939. In turn, he found and installed the compass, hat holder, tissue dispenser, view finder, thermometer, umbrella holder, flashlight, pipe holder, clock on the glove compartment, suicide knob, and ash tray. Within a few months, Carlos had transformed the Master Deluxe into a show-quality vehicle but it was time to throw in some lowrider flavor.

Carlos added some 13-inch wires and lowered it. After a few weeks of staring at the Chevy in this condition, Carlos decided to switch it up even more. He ordered a set of 15-inch Artillery wheels and had them painted Fire Engine Red. Once installed, Yaril Customs notched the frame and removed the leaf springs, and a four-link was installed to make the car sit even lower. Carlos purchased a Pesco aircraft setup from his close friend Keoni and had Hoppers Hydraulics (Hialeah, Florida) install it.

As one of the leading influencers in all of South Florida, Carlos is known to change things up and lead by example. From his 1959 Impala in the early ’00s to his 1939 DeLuxe today, Carlos always sets the benchmark high. Now that he’ll be cruising his 1939 throughout his forties we’re all a bit excited to see what his 50th birthday will bring.