Newsletter
Sign Up today for our FREE Newsletter and get the latest articles and news delivered right to your inbox.
Home » 1938 Ford Roadster Convertible DeLuxe – New Cars Have No Soul 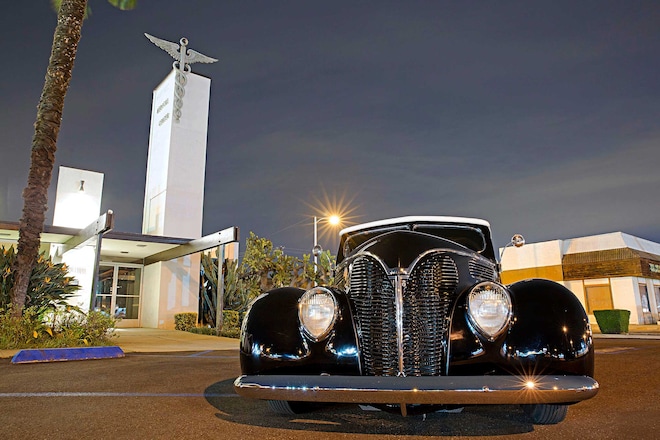 New cars have no soul. They have no history. They’re merely mass units of transportation, whereas classic cars offer an appeal that just can’t be beat. When you buy a classic car, you buy many things. Each layer of bondo tells a different story and each rusted panel comes with even more history. For the owner of this 1938 Ford roadster he’s got plenty of stories to share.

After finding this local ride being auctioned off on eBay, David Novelo took a drive to inspect the car. The car belonged to an Italian gentleman who had it “rodded,” but its history is quite interesting. Far from what you see now, the owner explained to David that the car was imported from Argentina as an RHD (righthand drive) model. Upon inspection the frame needed to be changed out due to rust, and at the time it was difficult to source RHD parts so he converted it to a lefthand drive vehicle. Regardless of the mods, a good conversation led to a handshake and the deal was done.

Always a fan of the “chop top” looks, David decided to do some body modifications and, as he explains, he says “[The Ford] was an original Cabriolet, so that means it had a backseat and the convertible top was further back. Since, I’ve always like the chopped looked I wanted that for the convertible, so I went to work.” After driving it around for a couple of weeks the transformation began, starting with the suspension. He got new TCI A-arms installed, had El Oscar Z-notch it, and then completed the setup with an airbag setup. Once the vehicle’s posture was corrected El Oscar started on the metalwork. He eliminated the backseat and added just about another foot to the length of the trunk, giving it a longer, much sleeker look. From there, the top was shortened and once prepped it was treated to a full paintjob and interior makeover.

Though it’s only been months since its completion, he was able to enjoy the car for a good minute before doing this shoot. Unfortunately, this will most likely be the last time you’ll get to see this beauty in the states because a day after the shoot, the car was sold to a buyer in Japan. With hopes to use that money to buy a house, only time will tell if he buys the house or goes on to build yet another great project. We’ll keep you posted.

Body/Paint
David Martinez chopped the top by 3 inches and the convertible mechanism. Kurt of TK Classics did the bodywork and laid the House of Kolor black paint.