Newsletter
Sign Up today for our FREE Newsletter and get the latest articles and news delivered right to your inbox.
Home » 1938 Chevy Master Deluxe – The Beast 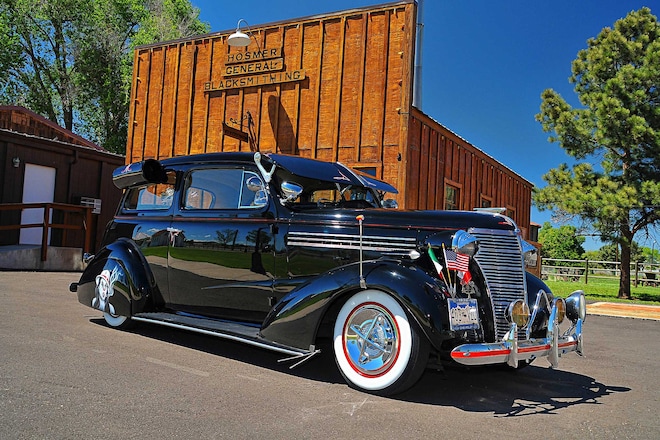 Back in 1933, Chevrolet introduced the Master and the Master Deluxe. At the time it was the most expensive vehicle in the Chevy line up and till today it retains a mystique that is unchallenged and a loyal following from both classic car lovers and lowriders alike. One of those loyal fans is Julio Estrada. Back in the 80’s, Julio grew up in Juarez, Mexico and that’s when he first fell in love with the mammoth vehicle. By the time he hit his late teens, he wanted to change his life around so he moved to the States and ultimately landed in Aurora, Colorado. By the time he was financially stable, he revisited his dreams of owning a Master Deluxe and that’s when he located a 1938 Chevy Master Deluxe in Nashville, Tennessee. The Deluxe was in the process of being restored and still sported the original paint from ’38 albeit weather torn and deteriorated.

Julio began by stripping the Chevy and sending it off to Derek Gallegos and Pat Coca at No Limit Kustoms. The duo had just opened the paint shop and this was actually their first job. The faded black paint was stripped down to bare metal and repainted in jet black with accents of fire red. From there, Julio brought the Master Deluxe to Alfredo Ortiz who was an art teacher at a local university and it was Mr. Ortiz who laid down all the custom murals.

To give his bomb a ground hugging stance, Julio changed up the front suspension including the tie rods, A-arms as well as the brakes. This insured his vehicle’s road worthiness and to give it some show points all the chrome was sent out to Jamal Collins for some refreshing. Inside, the cabin was faded and blistered so Ron Tenorio gutted the interior and updated it with light brown carpeting, a brand-new headliner and rewrapped the seats in two-tone leather.

With the interior done, Julio went on a mission to locate all NOS parts that came stock on the ’38. Among his finds was a swamp cooler he had pinstriped by Tate Hurt, a pipe holder that mounts on the driver door—now take a deep breath—because he also found the stock air fan, the lamp, beauty mirror, old school compass, street light finder, OG shift knob, passing mirror, rare 30’s fog lamps, bumper guards, reverse lights, a Fulton visor and lamp eye lashes. The final compliment—and a signature piece of every Viejitos car club member—was the addition of the classic fox tail, which is used by the club as a symbol of cleanliness and class.

“I know I came from humble beginnings,” Julio Sr. tells LRM, “but I promise my son will carry on the rich tradition and culture of lowriding.” Julio wishes to thank everyone who had a hand in helping fulfill his life-long dream and a special thanks goes to his wife Lucy Estrada for all her support and love, No Limit Kustoms for the great paint job, Alfredo Ortiz for the perfect murals, Jamal Collins for the chrome plating, Ron Tenorio for the beautiful interior and Tate Hurt for the pinstripe.