Newsletter
Sign Up today for our FREE Newsletter and get the latest articles and news delivered right to your inbox.
Home » 1937 Lincoln Zephyr – A Winning Loss 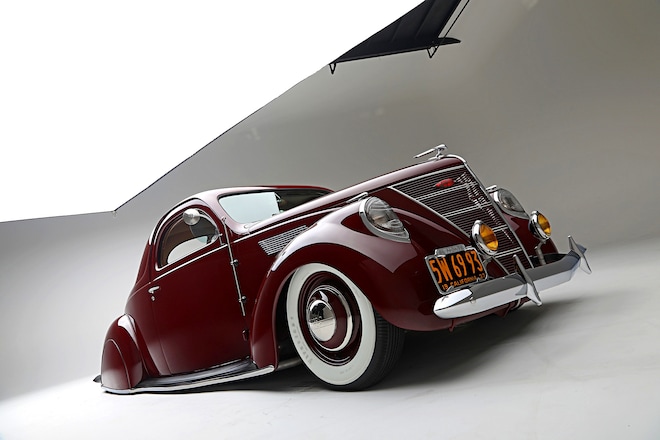 All these new television shows on finding, fixing, and flipping classic cars is cool, but it’s also downright depressing. To be honest, they make it look easy; then again that’s called Hollywood sensationalism.

With that said, the success of their shows is based on the fact that all car guys have that one classic “dream car.” Now throw into the mix a good story about finding it for dirt-cheap, a little bit of drama, and boom! you now have a television show—but it’s just not that easy in real life. Finding your classic dream car is a task in itself, but if you’re looking to make killer profit on top of it, chances are you’ll be shit out of luck. In fact, anyone who’s really into cars will tell you that the simplest rule to collecting cars is to buy for passion rather than profit. Makes sense, because if you bought a car you really liked and it never appreciated would you have ever lost? No.

Just ask David Novelo from El Monte, California. A classic car lover at heart, he’s fascinated by many makes and models, but it’s the Lincoln Zephyr that’s held a special place in his heart. During the interview, his enthusiasm for the Zephyr was clearly evident. It was a car he had long admired; a car that he best sums up when he says, “Factory-built Zephyrs look like custom cars by design. You can tell they took great pride in the late ’30s when it came to the car design and they were just way ahead of their time during the Art Deco era.”

As we get to the tail end of the conversation, David starts backtracking about how he stumbled upon the car. It all started when he was on the hunt for a 1937 Chevy five-window coupe. He found the listing on Craigslist, called the owner, and just as he was about to make arrangements to see the car the owner made it clear to David that someone else had already contacted him and that he had already agreed to give him first dibs.

Still hopeful and to no avail, he tried to convince the owner to sell it to him since he had cash in hand and a trailer ready to go. “I was a little disappointed that he said no, but I can definitely respect him for being a man of his word,” David says.

Ultimately, the first buyer wound up buying the car, and in what was probably an attempt to ease the awkwardness of the situation, the seller asked David what kind of other cars he was interested in. It turns out the seller had a pretty sizable collection, including a couple of Mercs, a few ’50s, a few ’30s, a Rivi, and as he rambled on he heard “1937 Lincoln Zephyr.” In an instance, David began to ask more questions about the Zephyr and that conversation took him on a journey up to Santa Maria to see it in person. “A 1937 Zephyr was on top of my bucket list of cars that I wanted and the opportunity just fell in my lap!” David says, as he goes into the story. Upon his arrival, there it was, his dreams were within arm’s reach, but the asking price a lot further. Knowing that he couldn’t afford it, David managed to work out a deal in which he would give up a 1936 Ford coupe on top of some cash—and the deal was done.

A bit weathered and showing signs of aging, the Zephyr was in otherwise good condition. Looking to breathe life and luster back into the paint, it was dropped off to Richie Valles where he doused the car with a fresh coat. Since the car was previously bagged, the system was dated so they replaced it with a new unit, allowing the car to sit even lower than before. To eliminate what little was left of the rubber in the wheelwells, David swapped out the 15-inch artillery wheels for a set of 16s and had the original hubcaps modified to fit.

Since completing the Zephyr, it’s seen its fair share of action. Hardly one to sit around, David says he’s not a fan of conventional car shows, which is why you’ll most likely spot him on a cruise or taking it out to the grocery store. But amidst all the eyes he attracts are also a good amount of offers to buy the car—all of which are graciously denied, but who could blame him? In the past decade, the Zehpyr may have fell off the radar and experienced a tumultuous sales history, but not now. In the past few years the interest in the Zephyr has brought about a revival to not only its past but its pricing, and that’s a good thing for David.

Suspension
Fatman Mustang II frontend with disc brakes in the front, AccuAir airbags all around