Newsletter
Sign Up today for our FREE Newsletter and get the latest articles and news delivered right to your inbox.
Home » 1982 Cadillac Coupe De Ville – Doin’ His Thing 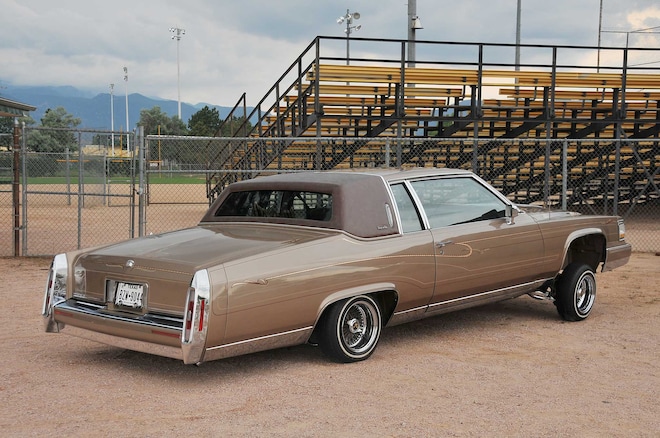 Although Queens doesn’t have an aggressive name, it’s a rough part of New York. When Ceez Bejarano was a young boy his father knew the right step was to get him and his older sister out of New York. He requested a work transfer to New Mexico and the family decided to look around for new homes in the area. Coincidentally there was a wedding that day in the area they were in and parked alongside were lowrider cars. Having never seen one before, Ceez became enamored with the look and style of the custom rides. He started looking around for any information on these vehicles and found his first LOWRIDER magazine. From that moment he promised he would have his own customized ride.

With his own creativity in mind, Ceez tore down the Cadillac and gave it a fresh coat of paint. The undercarriage was painted, pinstriped, and leafed. The suspension was overhauled and a complete stereo system was added. The help he got along the way was very integral to his success.

He wishes to thank his club brothers, Chuck Linebaugh, Jays Meade, Norman Parra, as well as the rest of his supportive club members, Nene from Majestics for starting this project, his family, and most of all his beautiful wife, Tiffanie, for always supporting the lifestyle and understanding his passion. This Caddy had passed through so many hands but nobody ever stopped to make it their own. Ceez and his crew gave it a home and made it their own.