Newsletter
Sign Up today for our FREE Newsletter and get the latest articles and news delivered right to your inbox.
Home » 1962 Chevy Impala Convertible – A Nod to the Gods 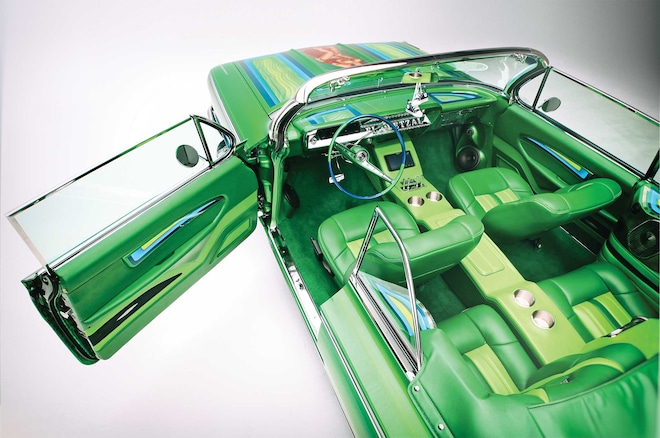 The sky is certainly the limit in turning what’s in your mind’s eye to reality when it comes to cars. You have a chance to do something no one else has created. In Eddie Mijangos’ case, since he’s Guatemalan, he wanted to go with a Mayan-themed ride to honor his heritage.

With a paintjob as green as the quetzal it has enough engraving in Mayan motif to make the gods smile. Having graced the pages of LOWRIDER before with his ’87 Cutlass “Evil Ways” and ’61 Impala “Bugsy Malone,” you can be sure that he wasn’t going to pull any punches, making this stand out.

Eddie picked up this ’62 in original condition and took it over to M&M Hydraulics in Ontario, California, where they reinforced, wrapped, and molded the frame. They then put in a Ford 9-inch rear, dropped in old-school Hoppo’s pumps, four-square dumps, one tank, four batteries, four solenoids, 8-inch front and 10-inch rear cylinders, and four switches. Stopping those 13-inch Zeniths are Lincoln rear disc brakes and CPP discs in front.

Winston’s Auto Repair put in a 350 with plenty of chrome and serpentine setup and tied it to the 700-R trans with an extended and engraved driveshaft. The fuel tank was also engraved and done by Jaime Castaneda after OG Wiro came up with all the patterning, which includes a Mayan calendar in the trunk.

Lexus front seats and the rest of the interior was done by California Upholstery in all leather, along with a vinyl top with suede on the inside layer as well as a custom console. A Dakota Digital dash, CPP chrome tilt column, and JL Audio components complete the rest of the inside with stereo installation, done by Audio Factory.

The exterior was shod in an organic candy green with a gold base by Javier and Mexico Collision Center in South Gate, California. Curly’s Pinstriping handled the fine lines with the murals done by OG Wiro.

Eddie would like to thank his wife and sons for their support as well as Felix, Steve, Martin, and P. Nut. It’s hard to imagine this car being able to stand out any more than it already does. We look forward to seeing it at the shows.