Newsletter
Sign Up today for our FREE Newsletter and get the latest articles and news delivered right to your inbox.
Home » Adrian & Veronica Romero’s Dream Car, a ’52 Chevy Fleetline 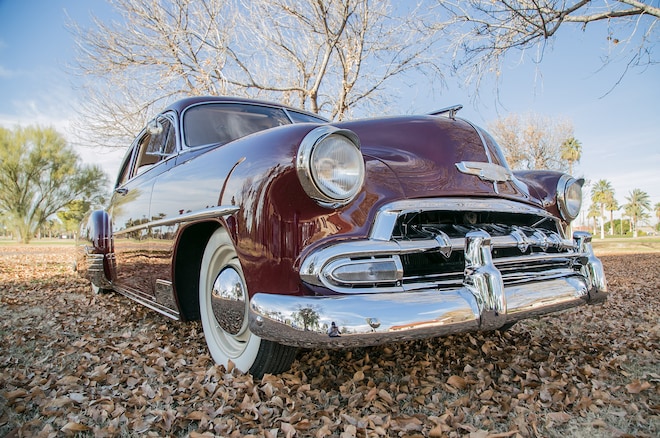 “I was 7 years old the first time I ever saw a lowrider,” Adrian Romero says. “My uncle was showing me a few pictures of his car that had been published in a recent LOWRIDER magazine feature and it was at that time that dreams of not only building my own car, but one day gracing the pages of LOWRIDER magazine began.” From lowrider bikes to car shows, this dream would follow him throughout his childhood. Coincidently, it was at a car show where he would meet his future wife who, lucky for him, also shared his affinity for classic cars.

After a few months of searching for the perfect car, they came across an Internet advertisement and soon they would have their dream car sitting in the driveway. This 1952 Chevy Fleetline restoration would take over four years. It began by visiting Louie Moncibaez, who would prep the body to receive a fresh bath of Dupont Burgundy metallic pearl two-stage paint, matching his wife Veronica’s favorite nail polish color. This color would be carried into the interior where Jaime Guanajuato Sr. of Phoenix blended a Burgundy and Cream leather combination. While Diversified Metals, also in Phoenix, was plating and chroming all the vehicle’s metalwork, Adrian’s father, Steve, and Junior Garcia continued the hard work filled with long nights that typically accompany any build of this scale. With the original 1952 Chevy 235 breathing new life, original steel wheels painted to match and Coker whitewalls gleaming, the heart and soul of this ’50s classic had been revived, thanks to a little bit of lowrider magic.

“A lot of people came together to help me build my dream car,” Adrian says, “but special thanks go out to Junior Garcia and especially my wife, Veronica, and our kids, who themselves have started their own lowrider builds with a bike and stroller often displayed alongside our car. But especially to Steve Romero: I want to say thank you for all your hard work along the way and that first trophy we received at the Las Vegas Super Show was for you, Dad.”