Newsletter
Sign Up today for our FREE Newsletter and get the latest articles and news delivered right to your inbox.
Home » Rebuilding a 1964 Chevrolet Impala SS Convertible 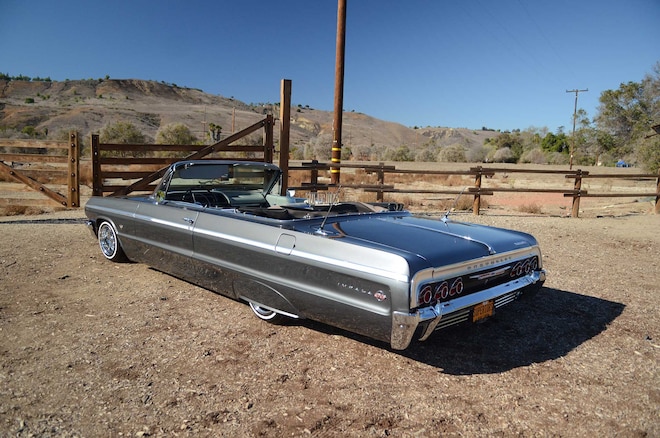 Jorge Maldonado has been involved with cars his whole life. His father was an auto mechanic and was always working on cars. Ever since he could remember, he used to wake up early to go with his dad to car show swap meets to find car parts. When Jorge was 7 years old, his first build was a 1964 Impala Model Car. This in turn led him to build a 20-inch Schwinn lowrider bike and at the age of 12 he joined Superiors O.C. Bike Club. It was Jorge’s childhood dream to build a lowrider. When he was 16 his dream came true. His father helped him purchase his first lowrider, a 1966 Chevy Impala. Like father like son, Jorge also became an auto technician and fabricator. He did a full ground-up restoration on his Impala. Since then he has owned numerous lowriders—a 1979 Monte Carlo, 1954 Bel Air, 1965 Impala, and now a 1964 Impala convertible.

Jorge bought his 1964 Impala SS convertible six years ago. The car was in fair condition and driveable, but had minor paint defects. He took it straight to Rudy from R&R Auto Body to touch up the paint and then to Edgar from Maxima Imagen to do a mural on the dashboard of his daughter, Rosalinda, who had died. Once that was completed, he threw on some wire wheels for a clean look and drove it like that for two years. He took his ride to local car shows and events and enjoyed cruising with his family. Eventually, Jorge decided that it was time for a new look and opted for a color change, taking his car to a different body shop. Eight months later and unhappy with the quality of the work, he decided to bring the car home and do it himself. Jorge had his entire family and friends helping him to remove all the paint and primer right down to the metal. So began the long process of rebuilding the body. Every weekend for six months his friend Javier Saucedo helped him work on his Impala. Finally, the hard work paid off and the car was ready for paint. Jorge rented a local spray booth and Javier sprayed the car charcoal gray. Now that the car was coming underway, he made a goal to have his car ready for the Las Vegas LOWRIDER Super Show in October 2015.

Jorge worked on his ride all day and night, along with his friend Gary Reynolds who helped him put his car back together. After finishing up the moldings and chrome, it was time to work on the hydraulic setup. Jorge put together gravity pumps that he had designed himself and had CNC-machined blocks. He then used aircraft dumps, known as click clacks and zig-zag slow down valves, with the help from Saul Vargas from Wild Child Customs. They hardlined the whole system and powered them with four Optima batteries. Jorge was very proud that he accomplished his goal. He made it to the Super Show in Las Vegas with a clean, simple lowrider. He could not have done this with without the support of his wife, Rosa, his family, friends, and his Superiors Car Club family.