Newsletter
Sign Up today for our FREE Newsletter and get the latest articles and news delivered right to your inbox.
Home » 1961 Chevrolet Impala – Ladies Own Lowriders Too 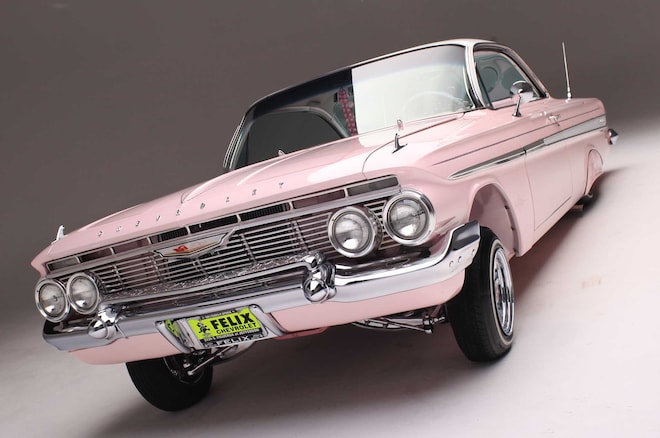 Where would we be without our ladies? It’s asking a lot for our significant others to tolerate this obsession (err … hobby, we mean), much less support it. You know you found a keeper though when one not only encourages it, but sinks her teeth into it as much as you. Danny Torrez met his match when he married fellow lowrider Nicole. After many years together Danny decided to build his better half the car of her dreams. Although many might argue that a pink car isn’t masculine, we’d have no problem parking this one in our driveway. Hey, if Elvis could rock a pink Cadillac, there’s no reason any man wouldn’t be proud to own this lovely 1961 bubbletop.

Danny put the word out that was the year he was looking for and upon finding a suitable candidate, immediately began blowing it apart for the mods to come. The frame was boxed with 3/16-inch plate, molded, powdercoated pink, and patterned by Danny’s friend Carlos “Coast One.” Custom trailing arms and a wishbone suspension were added so it sat low, but locked up high. Chrome plating throughout the undercarriage makes it all look clean. A stronger Toyota rearend was added as well as Caprice spindles and disc brakes with an RAB Performance master cylinder and booster. Deep-pocketed lower A-arms for bigger coils, a CPP steering box, and a quartet of Daytons with Zenith knockoffs keep the rolling stock going strong.

Two Hop Shop competition pumps in the rear and a one-piston pump for the front keep the juice flowing through hardlines with 1/2-inch fittings. Eight-inch front cylinders with 14-inch rear cylinders, three Adex dumps, nine solenoids, six group 31 batteries round out the hydraulic package with pink anodized and engraved blocks. A crate 350 was prettied up with some RAB Performance accessories, a Professional Products Power Plus manifold, Edelbrock 600-cfm cam, and tied to a 700-R4 trans.

The body was kept true to stock by Oscar Ruvalcaba and that beautiful PPG pastel pearl pink was done by Gilbert Acosta and is based on a shade of nail polish that Nicole liked. Accents like Curly’s pinstriping, muraling by Alberto Herrera, and engraving on the bumper guards, amp, A-arms, heater core cover, and hydraulics setup was added by Tommy Casteneda all done to Nicole’s specifications. Brightwork by D&R Chrome bring it all to life.

The interior was stitched up by Bones of San Jose in pink suede and white vinyl. Danny made a center console to house the iPad head unit that connects the Zapco equalizer, five-channel Orion amp, four Alpine Type R 6x9s in rear, a 10-inch Alpine Type R subwoofer, and two 5 1/4-inch Alpine Type R speakers in front. A Flaming River column is about the only other thing out-of-the-ordinary inside the 1961, but the rest is stock.

Although like most cars there are more details to come in the future, but Nicole and Danny get to enjoy their ride and turn heads at many car shows. Special thanks also go out to Abel Rueda, Kevin Olso, Kita, and the rest of the USO members for their support.

Although it was a short-lived styling touch of the early ’60s, the bubbletop basically only existed in 1961 and 1962. These cars feature a dome-like roof with large, curved rear glass and windshields, as well as curved pillars. In 1962 they were discontinued in favor of the “crinkle” top, which resembled a convertible at first glance. Bubbletop 1962 Bel Airs equipped with a 409 are very rare and command big bucks. Only the 1962 Bel Air two-door hardtop had the bubbletop body style, while the Impala coupe had the new convertible-look hardtop. The Bel Air four-door sedan of 1961 had the “flying wing” roof, but as unusual as the 1961 Bel Air four-door hardtop was, the real oddball of the 1961 Chevrolet lineup was the two-door sedan, the only year that the Impala was ever available in that body style. Other GM makes and models featured a bubbletop as well during the same years.