Newsletter
Sign Up today for our FREE Newsletter and get the latest articles and news delivered right to your inbox.
Home » Old Memories Bombs Factory ’54 Chevy 235 Convertible 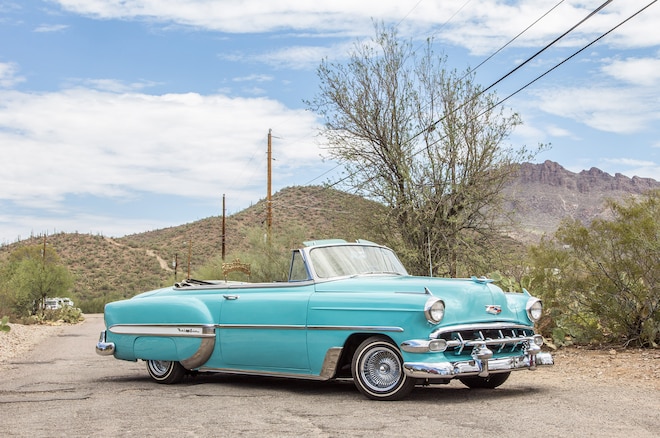 Johnny Arevalo of Tucson, Arizona, is no stranger to lowriding. With a career that already includes multiple custom and original Impala builds, as well the previously featured 1939 Chevrolet “Mr. Magnifico,” he brings us his latest creation aptly named “Mr. Bel Air.” “I wanted to fill my garage with something new,” Johnny says, “and a 1954 Chevy convertible is something I have always wanted.” So after finding this rare ragtop Chevy in his own backyard of Southern Arizona it was off to the infamous Old Memories Bombs Factory where majority of the restoration would take place.

The build was in full swing and while Royal Plating in Tucson was both polishing and chroming all the original metal trim, Roger of Wicked Whips was called upon to bodywork and spray this Bel Air’s signature Turquoise Blue paint. The original 235 engine was then rebuilt and upgraded with factory power steering. With a front and back lowered suspension the set of 13-inch, all-chrome, 100-spoke wire wheels bolted right up. The interior was freshened up as it still echoed the original two-toned factory white leather patterns and green leather inserts. With the brand-new Kenwood audio system way past 10, it was time to hit the switch on the power convertible top and cruise down that open Arizona desert highway.

“I want to give a special thank you to my wife who continues to support me during past and present builds, and thank her for always leaving the checkbook open,” Johnny says. With the assembly line at full speed, rest assured Bombs Factory will continue to produce more rides from both Johnny and the rest of the Old Memories South Arizona chapter.

Suspension
Both front and back are lowered 3 inches