Newsletter
Sign Up today for our FREE Newsletter and get the latest articles and news delivered right to your inbox.
Home » Regret Led Dave Edades to Build the Impala of His Dreams 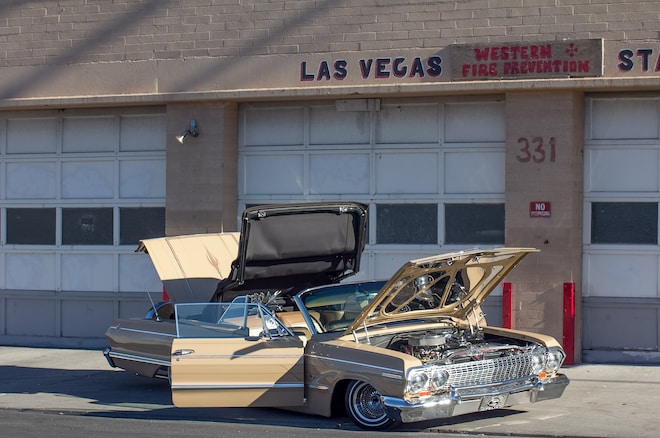 The ’90s were an unprecedented time for lowriding. From music videos to movies, it seemed as if mainstream media was finally embracing our culture. It was this national attention that led to influence many youth who might not have otherwise been exposed to the lowrider community. Such is the case for Dave Edades who, while seeing the iconic movie Boys In the Hood, immediately knew he would one day own a 1963 Impala convertible. He would soon make his dream a reality and after a few upgrades to his recently purchase convertible, he found himself cruising just like Ice Cube had done in the movie. Active military duty would soon come calling and only after a few years of cruising he decided to sell his beloved Impala … a decision he would soon regret.

That feeling of regret would eventually lead him to search for another 1963 Impala convertible. Only this time, with the help of a few longtime friends, he was going to do a complete frame-off restoration and “build it right.” The project’s first step was to take the original 327 small-block engine and give it a breath of fresh air by adding a Billet Specialties serpentine pulley kit, dual fans, a two-speed powerglide transmission, custom dual exhaust, and Edelbrock accessories. This was all done with the help of Danny Gonzalez and Carlos Ponce, owners of G-Spot Customs in Las Vegas. From there, they would cover the car in a Cameral Brown pearl. Gary Jensen, a pinstriper in Las Vegas, then laid down some gold leaf and pinstriping to accent the vehicle’s body lines.

While FM Plating was busy chroming the vehicle’s original metal trims, Old Man Jerry put together the tan leather and Eggshell White leather interior, featuring original stitching and custom side panels. Dave himself would take on the task of installing the AccuAir I-level system, as well as some of the audio/video components featuring an Apple iPad serving as the control center for subwoofers. Rolling on 155-80/13 radials mounted onto custom 13×7 diamond-cut chrome and gold-plated wire wheels, don’t be surprised if you find Dave cruising up and down the Las Vegas strip. He has no intentions of selling this convertible anytime soon.

Dave would like to give thanks to his wife Amie and his sons Jason, Izzy, and Steven, for their support during this build. “To Danny Gonzalez and Carlos Ponce, I thank you for all your hard work … I could not have done it without you. This build is dedicated to Randy Green and William Pertgen.”

Body/Paint
Danny Gonzalez and Carlos Ponce of G-Spot Customs would cover the car in a two-tone Caramel Brown pearl with Gary Jensen laying down some gold leaf and pinstriping accents.