Newsletter
Sign Up today for our FREE Newsletter and get the latest articles and news delivered right to your inbox.
Home » 2008 Dodge Charger – Aftershock 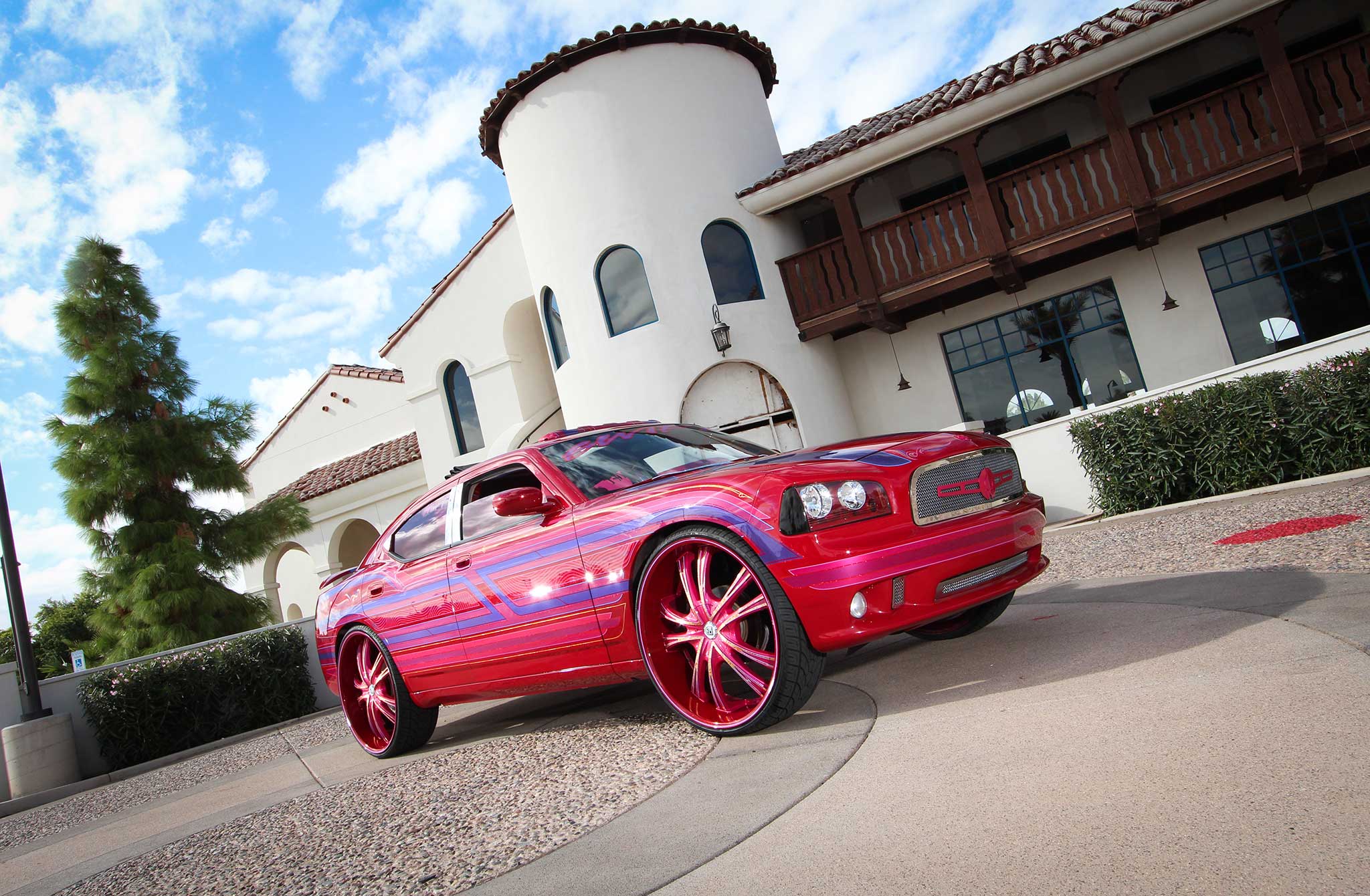 Abel’s love for cars started as a child. As long as he can remember, he says he has been around cars. First, it was playing with Hot Wheels toy cars as a kid to building model car hoppers as a young adult. He started building his first real car when he was 19 years old. That first ride was a 1972 Chevy Impala given to him by his dad. It turned out to also be Abel’s first show car. Since then, Abel has gone on to have a few other lowriders, including some G-bodies (Cutlass and Regal coupes).

In 2008, Abel decided to take a different approach on his next build. Going for a more modern touch, Abel and his wife, Michelle, purchased a brand-new ’08 Dodge Charger off the showroom floor. Within days, they had the performance-ridden Mopar repainted and the interior redone. Aftermarket rims and upgraded Lambo doors were also added. The Charger was a First Place-winning show car at just about every show they attended.

A couple years later, Abel ended up being involved in a car accident in the Dodge, but he just couldn’t let it go — hence the ride’s new name, “Aftershock.” Now, Abel and Michelle decided to do the makeover even bigger and better. The Charger went on to acquire a totally different look, but is now more eye-catching than ever before! A head-turning custom paintjob consisting of maroon, purple, pink, and blue among patterns, pinstriping, and gold-leafing sets off this ride among a sea of other show cars. The matching interior is equally impressive in comparison to the ride’s exterior.

Abel and Michelle admit it has been a tough journey with lots of sleepless nights and lots of time and money invested, but it was well worth it in their eyes. Abel’s preexisting patience was a quality learned thanks to his dad who instilled that initial love of cars in him.

Abel would like to thank all who supported him, physically and emotionally, during the buildup of Aftershock, including his wife and kids (AJ and Jordan), Chavo, Ricardo, Little John, Jaime, Lorenzo, Michael, Eddie at Tune It, Julio, Triple J, Bell Auto, Celestino, Lopes Auto, Mikey, Ramon, Juanito, JC, Albert, and the whole Arizona Chapter of Swift Car Club.

Body/Paint: Triple J Paints and Chavo, both in Phoenix, created a masterpiece on wheels, with custom patterns, flakes, pinstriping, and leafing

Suspension: Pobre Customs installed special spindles to give the ride a little lift for the custom wheels

Sound System: Tune It in Phoenix installed a Pioneer head unit along with a Polk Audio amplifier and Polk Audio tweeter, mid-range, and woofer speakers