Newsletter
Sign Up today for our FREE Newsletter and get the latest articles and news delivered right to your inbox.
Home » 1987 Trabant 601 Deluxe – The Professor Knows Best 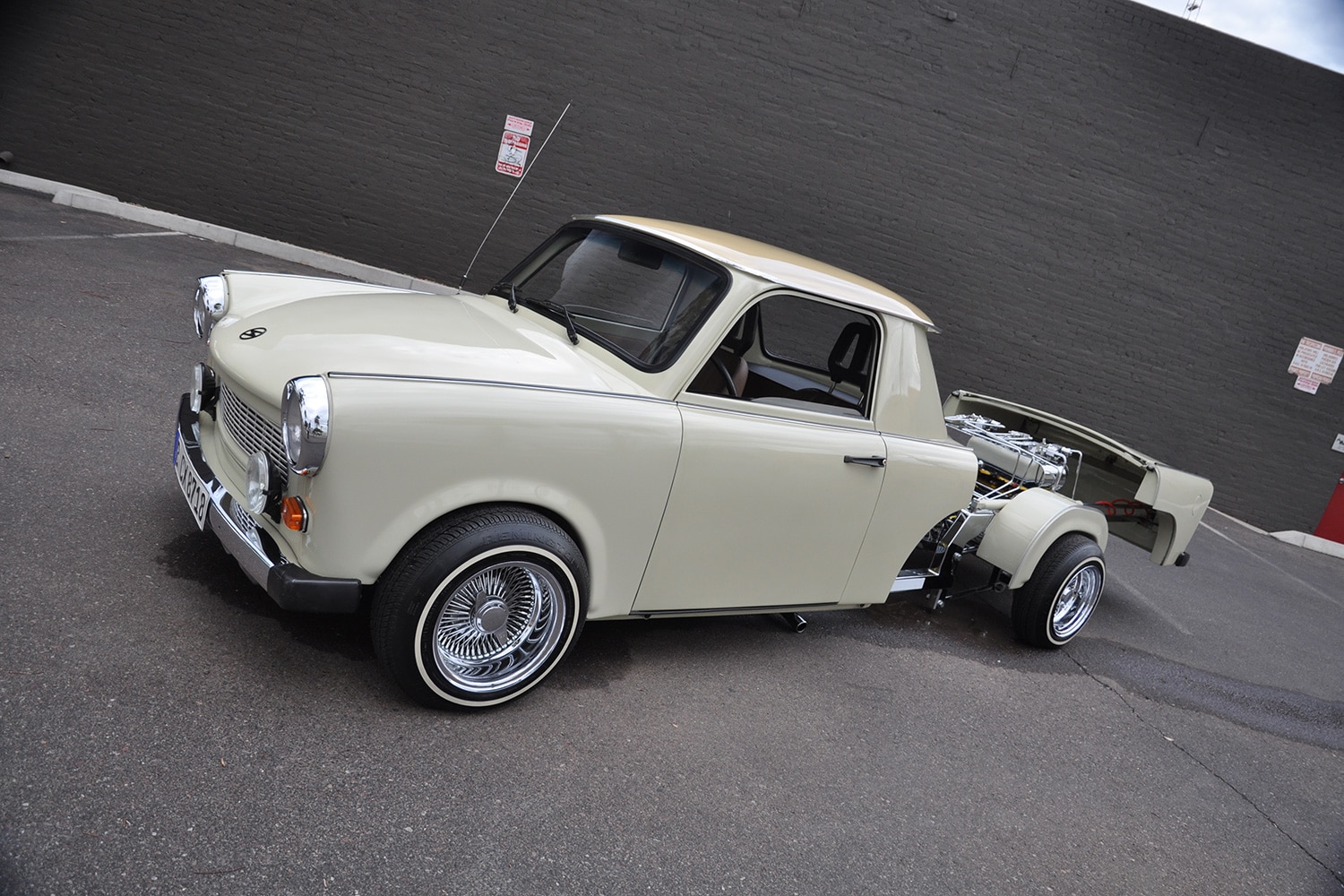 Lowriding has become a universal hobby and it’s apparent that the community has begun to stretch to the far corners of the globe with car clubs and car shows happening in countries like Brazil, Mexico, Japan, and Germany. People from every walk of life are using their vehicles as methods of self-expression and in the end, they are pieces of art. Sometimes adding a customized paintjob accented with pinstriping or simply just by slapping some spokes on with whitewalls and hydraulics—or in many cases, it’s both. Now and then we run into a vehicle that is so out of the norm, yet done in a way that it makes us look twice—just like modern art. No one would ever assume a German-built car could be manipulated in ways to make it a lowrider’s dream, but then again, there’s a first for everything.

Liz Cohen is a photographer and art professor who resides in Detroit, Michigan, so it’s no surprise that if anyone could turn a car into a piece of art, it would be her. Liz’s first encounter with the lowrider scene was at a local car show held in her hometown of Phoenix, Arizona. That moment set in motion her desire to build a lowrider of her own, and with time she envisioned a collision of two completely different worlds. You see, Liz’s vision was to convert this car from a stock four-door Trabant into an El Camino of sorts: the “Trabantimino.” Liz purchased the ’87 Trabant 601 DeLuxe for a mere $400 in Berlin back in 2002. After it was shipped to the states, the car spent a brief stint in Oakland, California, where some of the work got started, but Liz was still unsure of what direction to take. After moving back to Arizona a year later, Liz teamed up with Bill Cherry at Elwood Bodyworks in Scottsdale, Arizona. Under Bill’s supervision, Liz learned different skills, from welding to building a chassis, and for the next four years she completed extensive work on the “Trabantimino.”

After the initial teardown, Liz and her team designed and built a chassis that would extend and contract with the use of hydraulics. At full extension it would match the wheelbase of a ’73 El Camino. Liz used square tubing to build the frame. In order to get the extension, one square tube slides out of the other with the help of dual acting hydraulics placed inside the framerail. It also sports a chromed-out telescopic driveshaft that extends when the chassis is extended. Liz mentioned that the most challenging part was figuring out how the driveshaft will telescope four times to reach the El Camino’s wheel base. She turned to Sean Carlini from Rockford Constant Velocity in Illinois, along with Dick’s Driveshaft out of Phoenix, Arizona, to design and assemble it. The difficulty was maintaining its balance while contracted and extended. The frontend came from a totaled Chevy S-10 and was welded to the new chassis. The frontend was finished up with a Chevy 305 equipped with a four-barrel Edelbrock carb, Hedman shorty headers, a Painless Wiring kit, and chrome accessories paired with a 350 tranny. For the suspension, 8-inch cylinders were used in the front, and 14-inch cylinders for the rear as well as a triangulated four-link setup. A custom tank was outfitted with a three-pump setup, including six Optima batteries installed by JE Myles Inc. in Detroit, Michigan. The original floor and firewall were removed to sit the new chassis against it and make room for the engine and tranny.

After all this customization, the body was chopped in two where it would extend out and the rear package was moved forward to convert it into a two-seater like an El Camino. Liz and her team of mentors, Don Roberts and Tom Mello at Kustom Creations in Sterling Heights, Michigan, completed the bodywork. For the paint, the original Trabant scheme of marble white with pastel brown was chosen. Tom Galley and Ed Valentage from Al Sharp’s Garage in Rochester, Michigan, completed the job.

Liz stated that while transforming the car, she underestimated the work needed to transform the Trabant into her dream lowrider. Now, 10 years later, she’s still not finished with the project, but considers it a labor of love. Liz would like to thank her mother Beatriz and her husband Brian Fulton, alongside Al Sharp’s Garage, Elwood Bodyworks, Fast Eddie’s Garage, and Kustom Creations.