Newsletter
Sign Up today for our FREE Newsletter and get the latest articles and news delivered right to your inbox.
Home » 1963 Chevrolet Impala Convertible – Platinum Plus 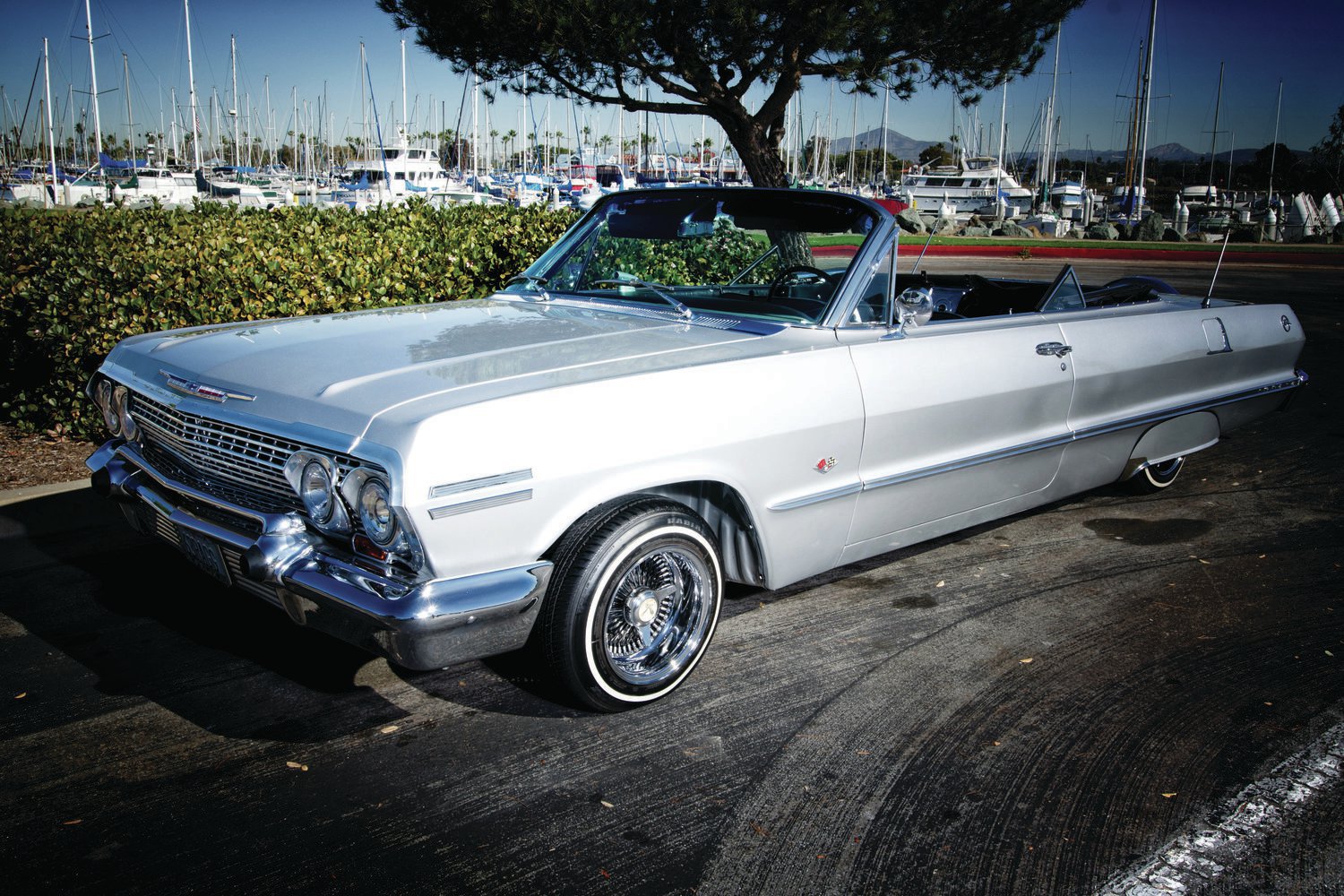 For many Chevy enthusiasts and collectors, the 1963 Impala is arguably the most popular of the third-generation of Impalas. The body style has sharp lines, pointed fenders, and the panels make the Impala look long and low slung—a look that is very popular with many of us in lowriding.

As a fourth grader in 1994, Miguel Aguirre could not get enough of the very popular MTV show “Yo MTV Raps.” At the time, almost every rap video featured lowriders, yet it wasn’t until he attended his first lowrider show at San Diego’s Jack Murphy Stadium that he actually saw a lowrider in person and from that point on it was game over. That first show experience not only solidified his interest in lowriding, it also introduced him to the 1963 Chevy Impala.

Although too young to drive and own a car at the time, Miguel set a goal to own a lowrider one day. Not just any lowrider, but a 1963 Chevy Impala. When the time was right, Miguel found a 1963 hardtop. The car was disassembled and placed on a body hoist, and from there it took him four trips home to get all the pieces back.

While he was working on the hardtop, his friend David Sanchez introduced Miguel to the San Diego chapter of the Majestics Car Club. He liked the camaraderie within the club and soon enough wanted to become a member, but not before the ’63 was complete. After 15 months, the car was finally complete and Miguel then began a year of prospecting. Soon thereafter he became a member of the Majestics and added the club’s plaque to the back window.

Like with most lowriders, once a car is done someone always shows interest in purchasing the just-completed car. That is exactly what happened to Miguel. Someone offered him a convertible ’63 Impala in rough shape and some cash for his hardtop. Miguel took the offer and redid the convertible in a nine-month frame-off build. Always wanting to improve the convertible and not one to be satisfied until it was looking its best, two and a half weeks before the 2011 Lowrider Magazine Las Vegas Super Show Miguel pulled the motor and installed the LS1. He barely got it to fire up right before the car hauler came! The convertible garnered a lot of attention at the 2011 Las Vegas Super Show including ours here at Lowrider.

Miguel, like almost everyone featured in the magazine, has a few people to thank for helping him with the build. He would first and foremost like to thank his family for their continued support. Thanks to Eileen for putting up with his crazy-car addiction and huge thanks to Mike Davey for all of his help. He would also like to thank Rob “Bird” Rice and his fellow Majestics Car Club members, Big Kid, Abel, and all of the shops that contributed to the build. We would like to thank Miguel for a great example of a classic 1963 Chevy Impala.