Newsletter
Sign Up today for our FREE Newsletter and get the latest articles and news delivered right to your inbox.
Home » 1941 Chevrolet Special Deluxe – Happy Times ’41 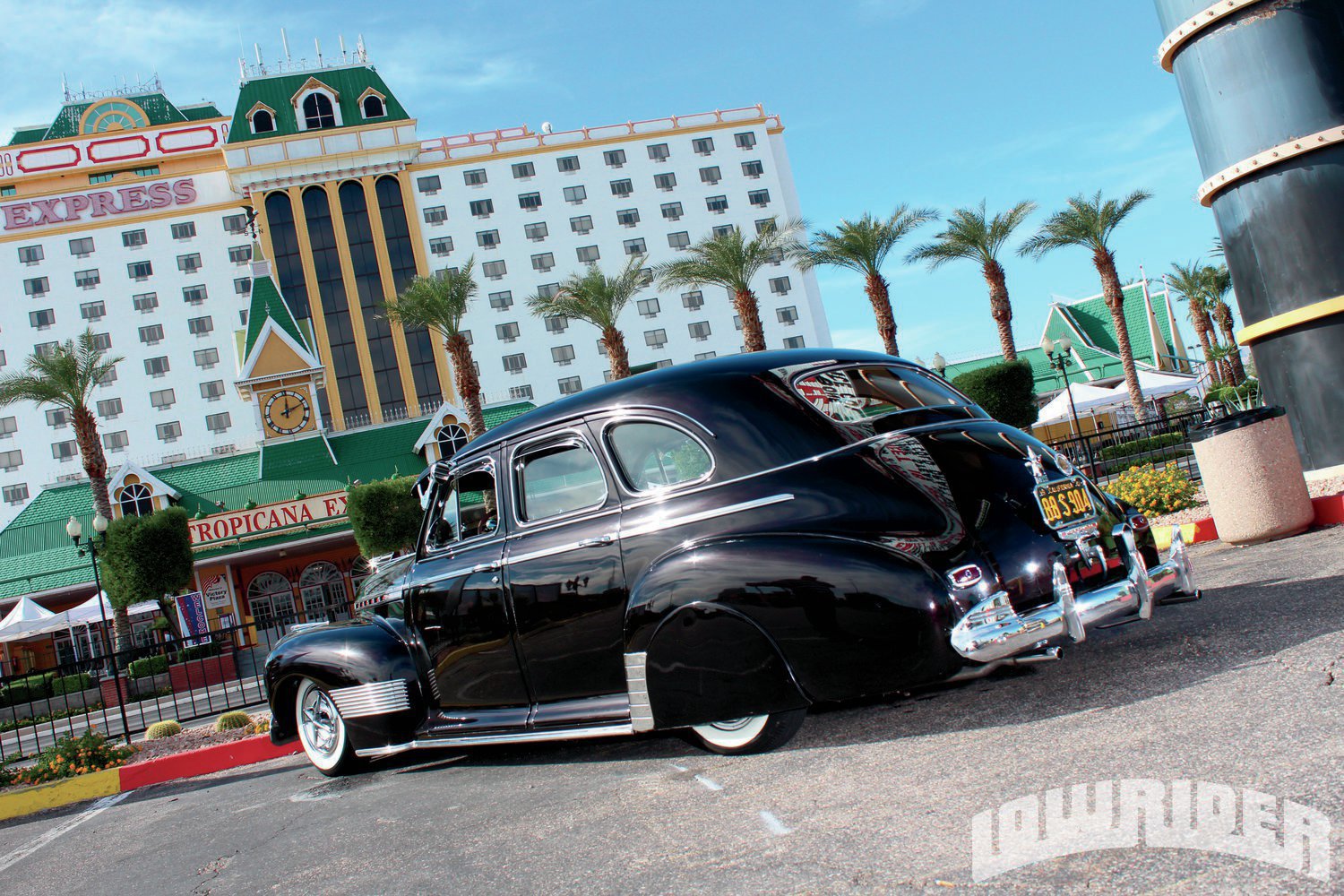 Some young lowriding men and women may work very hard at their job to bring in that extra cash not only to support their kids and pay their bills, but also to invest in fixing up their ride. With money tight, it could take some time to get that ride done to the point where they’re satisfied. This can be frustrating for those who just want to be done already with their automotive project and hit the cruise strip. For those people we say, just hang in there! One day soon enough, your kids will be grown, you’ll have your ride done and ready to cruise at anytime, and you’ll be retired and living in an area that might be of a more relaxed atmosphere. From there, you can kick back and just do what you want to do and enjoy life. A fine example of that way of living would be Louie and Cynthia Rojas, a longtime married couple living happily in Bullhead City, Arizona.

The Colorado River runs along the Nevada-Arizona border. Bullhead City sits on the east side of the river in this desert community and on the west side sits Laughlin, Nevada, a popular gaming destination where numerous casinos were built right along the river’s banks.

Coming from the Inland Empire area of Southern California, Louie and Cynthia made their move out to Bullhead City in search of a fun but slower-paced life in an area that boasts an abundance of mostly-sunny warm days throughout the year. With retirement in full effect, the couple was able to focus their attention on the rare ’41 Chevy Special Deluxe they had recently acquired. Within just three years, they turned the classic auto into a head-turning classy lowriding Bomb.

With connections to the lowrider scene in Southern California and management officials at the Tropicana Laughlin Hotel & Casino, Louie and Cynthia saw the perfect ingredients for an epic car show event that would be fun for the whole family every year. With time on their hands, the duo embarked on their own business venture called Happy Times Events, a promotions company that would be the vehicle to bring the oasis event they envisioned to life. It was perfect, too … the Tropicana would provide the hotel stay for the out-of-town car show enthusiasts and vendors. It would also serve as the perfect outdoor venue for the car show to be held, and it would provide air-conditioned gaming fun on the inside for those adults who wanted to take a break from the heat outside. The Colorado River provided water recreation and the nearby Oatman ghost town provided historical entertainment, both great for kids. The area simply offered a lot to do for a family who just wanted to get away for the weekend.

Louie and Cynthia have now been doing their car show event for quite some time and it draws in visitors from Southern California, Las Vegas, Nevada, and various Arizona metropolitan areas. Their annual Cinco de Mayo weekend event has made them somewhat of a celebrity couple not only among the lowriding crowd, but also among the locals. It’s not hard to miss their ’41 Chevy rolling up and down the highway!

Body/Paint: Good friend, Barry, of Rialto, took on the duty of doing the bodywork and paint on this ’41, using an alluring red rose metallic color.

Setup: Jimmy of Shot Callerz Customs in Rialto installed an airbag setup in the trunk, powered by one Optima battery. The setup allows the front and rear ends to lift with the hit of a dash-mounted switch.