Newsletter
Sign Up today for our FREE Newsletter and get the latest articles and news delivered right to your inbox.
Home » 2005 Chrysler 300 – El 3 Cientos 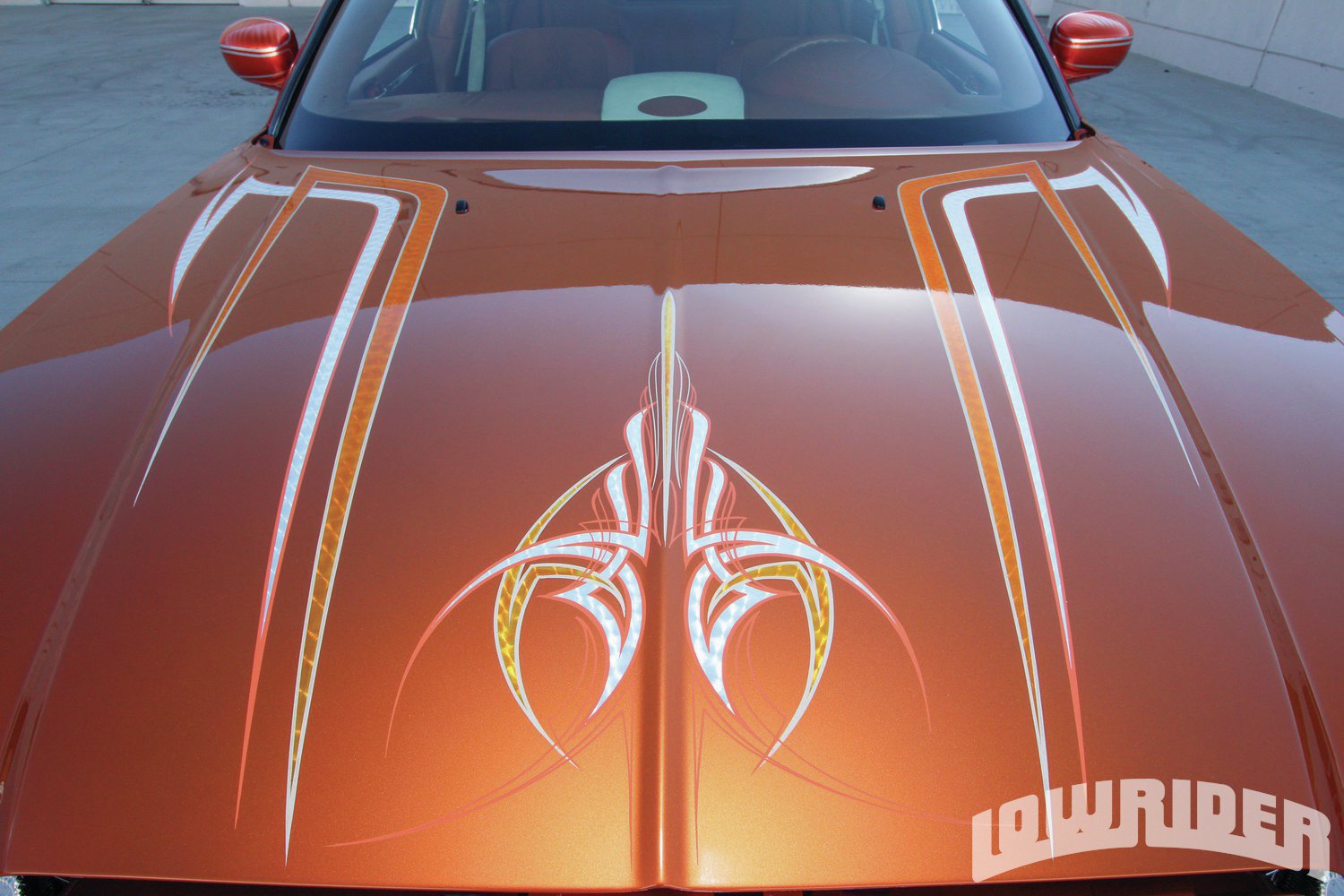 Angel Villa lives out in the Coachella Valley desert of Southern California, not too far from Palm Springs. Out there, the temperatures can easily exceed 100 degrees Fahrenheit consistently throughout the long summer nights. Sometimes though, it isn’t just heat that rises. Take for example, the custom car culture that is alive and well in the valley. A true reflection of that in particular, is this slammed ’05 Chrysler 300, which has altitude-challenging maneuvers available at the hit of a switch. Lowrider, hot rod, and other customized vehicle genres may be a common sight to the locals, but this 300 has a little taste of them all, revealing one badass creation!

Angel says traditional lowriders have long been an influence in his life, but when he first saw this 300 at the dealership back in 2004, he knew he had to have it. Although he didn’t start customizing it until 2010, Angel knew all along that he wanted to add a lowrider-esque feel to it, while still retaining a newer age look. Once he started the makeover, Angel followed the general lowriders’ handbook; adding some of the trademark customizations like elegant chrome engraving (done by Jaime Castañeda of Banning, California), chrome suspension, detailed airbrushed murals, and intricate tribal patterns on the interior inserts and exterior paint.

As with many of the newly built high-end hot rods and low rods, a clean leather and suede interior was chosen for this ride. A frame-laying stance was enabled on the 300, thanks to the custom airbag setup. In order to further fit in with the elegance and class of the late-model, newer age custom BMWs, Mercedes, and Bentleys, Angel had two TV screens and a sunroof installed inside the ride. This complemented all of the other all-power options that this 300 features, creating optimum comfort and all-out luxury.

Angel sends his thanks to all of those who helped him with the build, including Orlando Ceballos, George Rodriguez, Jose Indio Rodriguez, and his fellow Rollerz Only Car Club members. A big thanks also goes to his special lady, Janie, and the kids Angel, Jacob, Tony, and Bella. Angel says he really appreciates their patience during the build-up of the 300, which took up many weekends and late night hours.

Engine: Stock ’05 Mopar 3.5 V-8 with engine bay kit made by 3G Customs and painted by Orlando Ceballos from Perfect Kolorz in Indio, CA.

Body/Paint: Lore was the person Angel trusted to do the bodywork on the 300, before it was taken over to Orlando of Perfect Kolorz. Orlando laid down a water base and candy paint consisting of an atomic orange color. Mike Lamberson of Riverside, CA, added his one-of-a-kind pinstriping talents and Sal of Sal’s Airbrushing, also in Riverside, carefully depicted sexy Aztec ladies in his artistic murals.

Interior: Victor Moreno, of Unlimited Upholstery in Indio, wrapped up the entire interior in leather and suede. The seats, door panels, and even the headliner received the royal treatment in colors and patterns that matched perfectly with the car’s exterior.

Sound System: Victor also installed the electronic entertainment system consisting of a JVC TV head unit in the dash and a second TV screen above the back seat.

Setup: George Rodriguez was the man in charge of the airbag installation out of his home in Coachella, CA.