Newsletter
Sign Up today for our FREE Newsletter and get the latest articles and news delivered right to your inbox.
Home » 1962 Chevrolet Impala Station Wagon – Memories Immortalized In Metal 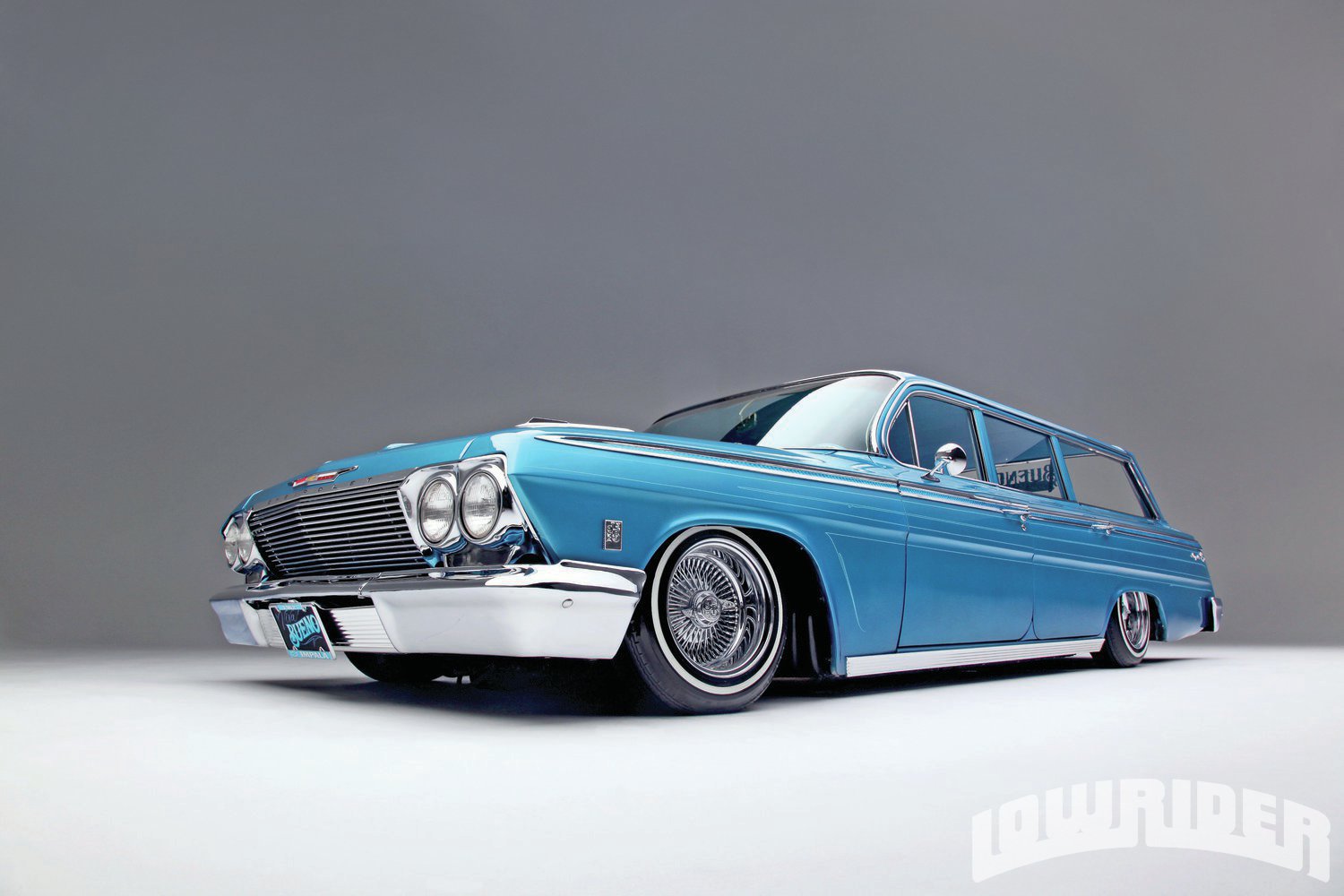 The word “family” isn’t just reserved for those who share the same blood. Family is a word defined by those whom you share your life, heart and memories with and it’s no different when it comes to car culture. Nights spent underhood with friends lending tools and knowledge, days spent detailing, perfecting and working to pay for parts; it’s this camaraderie which makes each car that much more memorable. Weekends are spent laughing, story telling, commiserating and cruising. What would any of this be without the family that we share it with? Would the memories hold as much weight? Would the trouble be worth the reward?

There’s a Latin quote that reads “transit umbra, lux permanent,” which translates to “shadow passes, light remains,” and when it comes to a photographer’s world, things are no different as each picture is made completely of light and shadows—much like life itself. So when someone with the talent and charisma that Jae Bueno possessed leaves this world, there is a very noticeable shadow left behind. The task that remains is to allow the shadow to pass, and to let light shine down on those who called him a friend, father, husband, inspiration and brother.

Jae Bueno was an icon in the Los Angeles car culture scene and those honored enough to have met him know all too well that a crack of a smile was soon followed by his infamous greeting, “Hi, Friend.” Beyond this trademark intro was a talent, which captured life in all its essence. His photos held a certain weight to them that you don’t easily find in this era of Instagram and cell phone snapshots. To have your car photographed by Jae was an honor and a bragging right, and whereas most photographers are quick to brag, Jae was an artist who was content to let his work speak for itself. So how do you pay tribute to a man who provided so many memories and priceless images? You build a show-stopping lowrider, and you do it with the help from those whom Jae called friends.

By friends, I mean a veritable village of mechanics, fabricators, suppliers, painters, upholsterers and organizers. What initially started off as a passion project turned into a one-of-a-kind memorial constructed of metal and a tribute to the love for an irreplaceable man who was taken from us much too soon. Jae had always dreamed of building his own lowrider, but the project never came to fruition because of his dedication to his craft of photography. Whereas countless hours could have been spent building a car of his own, he sacrificed most of that time editing photos and attending shows. So when the bad news broke about his diagnosis with cancer, it was his close friends Cartoon and Joey Hernandez who concocted a plan to make Jae’s dream come true.

Though the two of them originally put the plan into action, it’s safe to say that a strong network of friends, families and supporters all pitched in to create a wagon that Jae would definitely be proud of; and although Jae wouldn’t be alive to see the completion of the project, he was able to view the shell and completed body work/ paint and that in itself gave him the strength to smile. Rest assured he’s looking down now, quite happy with the finished product. It’s also very important to note that while Cartoon and Joey initially planned the build and a number of hands touched the project, it was Joey Hernandez who ultimately saw the project through from start to finish; and he continues to be the ambassador of the build. Not only has he vested hundreds of hours of his own time, he also put up a significant amount of his own money. In addition, he continues to trailer the car from shop to shop and show to show, and it’s with this due diligence that he keeps Jae’s dreams and visions alive. Along with a team of talented artisans such as Luis (House of Pain) and Danny D just to name a few, the car has finally been completed and it’s definitely a sight to see. Jae’s wife, Stephanie, son Julian, and daughter, Caila, no doubt see the “Deuce” as a physical representation of the passion Jae had for the lowrider culture, and it remains a constant reminder he lives on through them and his extended family.

They say that a picture is worth a thousand words, and Jae’s work will forever be chronicled online, in galleries, as well as in our hearts. Although he’s gone, he’ll never be forgotten as his wife, Stephanie, will continue to carry on his legacy through the eyes of her own lens and in the end, it’s safe to say that a lowrider of this magnitude – and built by the industry elite—packs a lifetime of love, passion, and friendship which will forever keep Jae in our hearts. Rest in peace, friend.”

Engine built at: House of Pain

Chroming and engraving work made and donated by: Engrave It Inc.

Powdercoating of parts and components donated by: Millennium Powder Coating