Newsletter
Sign Up today for our FREE Newsletter and get the latest articles and news delivered right to your inbox.
Home » 1961 Chevrolet Impala – Pretty Penny 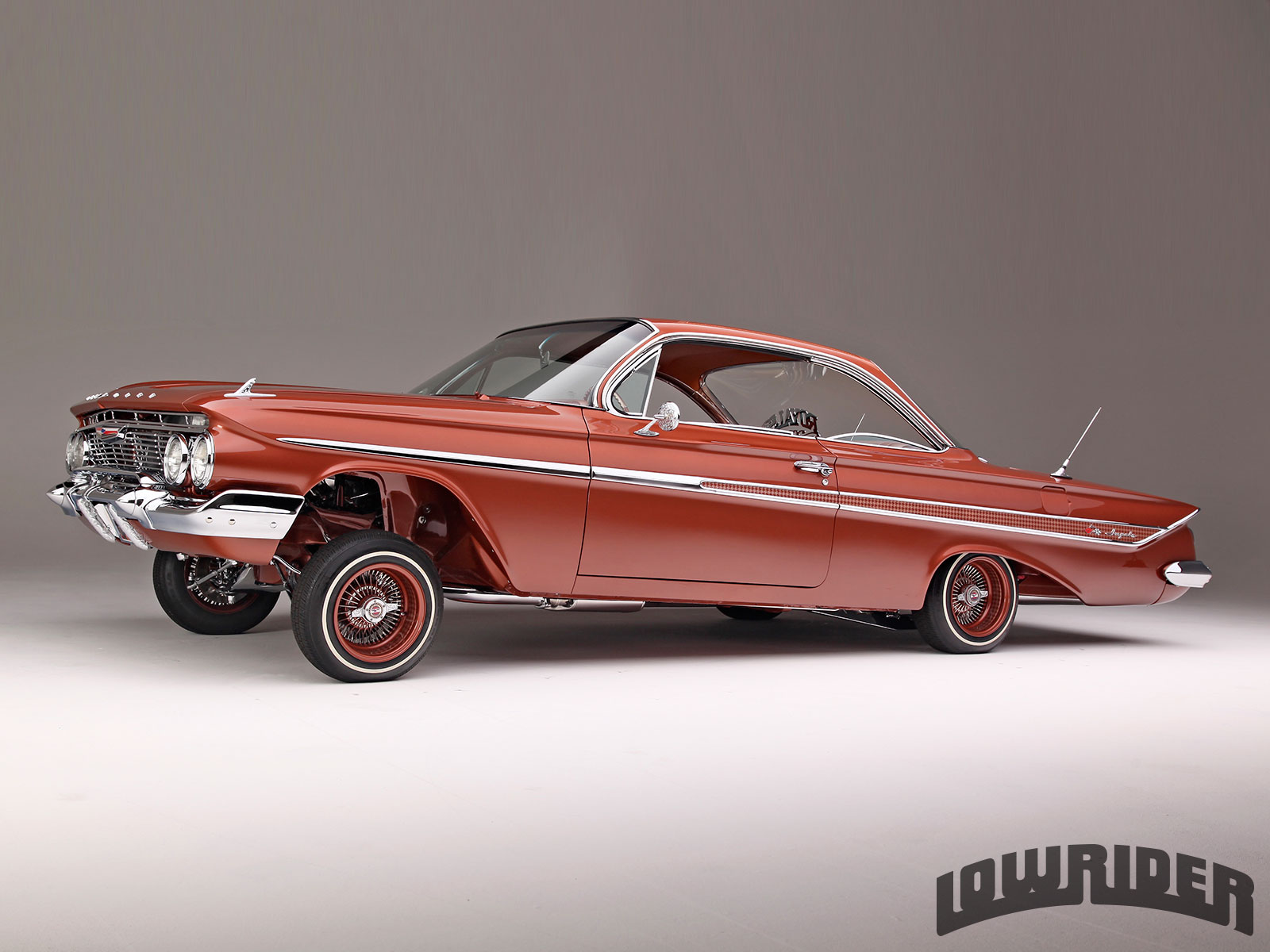 In the lowrider world, deadlines can sometimes be your worst enemy when it comes to building a car. Many within the show scene use show dates as motivation to finish and debut their hard work. Some builders get lucky; everything runs smoothly and they have plenty of time to work out the kinks.

That said, I know I’m not the first person to tell you that this is laughably rare. Most builds are a scramble and a half, and for Lisle Helms of Henderson, Nevada, making the deadline for the Lowrider Magazine Super Show was anything but easy. Lisle and his crew put in many late nights of burning the midnight oil to make it in time, and they made it by the skin of their teeth.

It took a lot of dedication to get this ’61 there and for Lisle, that dedication was instilled in him as far back as high school. Lisle and his friends, Lenard and Bobby, were members of Delegations car club when they were all in high school. “I didn’t have a car when we were in high school, but I used to ride around with them a lot,” says Lisle of his early days. His first car was a ’77 Impala that he had candy painted with center gold wire wheels. The car was called “Slimer” and it was quite the dancer. “I actually drove it from Las Vegas to San Fernando with four pumps, twelve batteries and 5.20s. I danced it against Jerry Lamm and then drove it back home,” he says, laughing and shaking his head.

While his younger days in the scene were wild, he learned a lot, and after painting Brian Shaft’s ’61 known as “Riddler,” he wanted one of his own. “After that, I had to have a ’61 bubble top; not a rag or anything.” After his friend Chris Madsen, spotted a ’61 in Utah on a business trip, Lisle found himself headed up there to check it out. After trading his finished Box Caprice, his journey with this ’61 began. “Everything on the ’61 had to be redone, but I was happy with the deal,” explains Lisle. Though the Royals car club he belongs to is known for being street riders, Lisle couldn’t help but take this build further. Still, he didn’t decide to take it to the show level until he met Hernan D’Aloia. “His work blew my mind,” says Lisle. “When I started dropping that kind of money into the car, then I knew the car couldn’t just be a street rider anymore.”

When it came to the hydraulic setup, Lisle went to Black Magic Hydraulics. “Ron had some of the new pumps that he was mocking up and I told him that I wanted to be the first guy with that setup. We started working on it, and money wasn’t an issue.” It was money well spent, as Lisle’s ’61 debuted at the 2012 Las Vegas Super Show and took home Best Hydraulic honors at the show; a huge deal for Black Magic, and a testament to Lisle’s determination to make this ’61 his pride and joy.

Body/Paint: Once Danny Tinker of Devious Designs in Las Vegas, NV did the bodywork, he used DuPont Pearl Copper paint the bubble top. Gary Jenson patterned and stripped the top.

Interior: John Kennedy at Bowtie Connection in Los Angeles, used a stock copper kit with 1960 inserts for the interior.

Chrome: Hernan D’Aloia of Engrave It, Inc in Montclair, California, did all the engraving and Brent Reese of Mr Impala Ent. In Covina, California, chromed everything.