Newsletter
Sign Up today for our FREE Newsletter and get the latest articles and news delivered right to your inbox.
Home » 1954 Chevrolet Bel Air – Inferno II 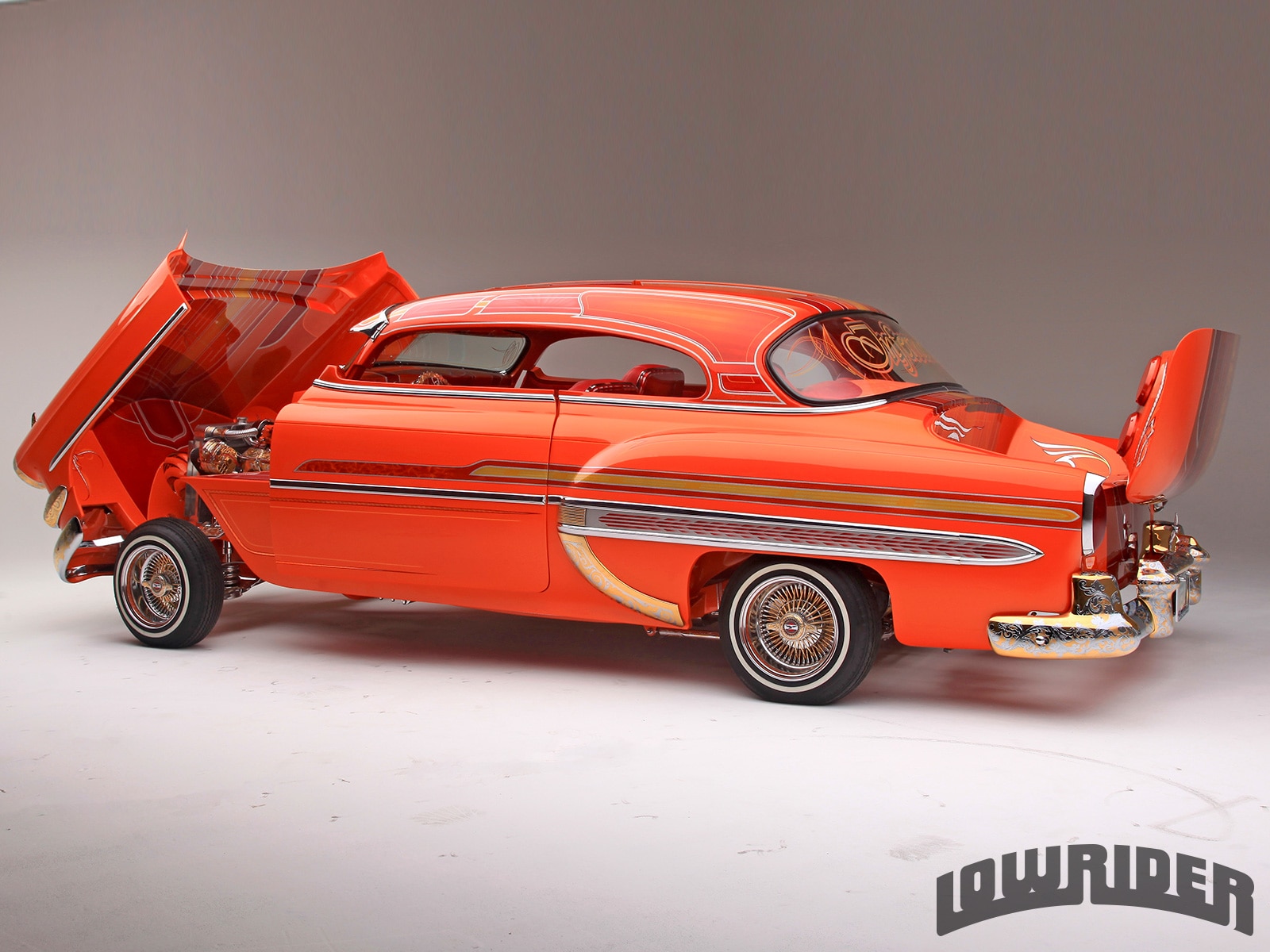 Working your way up in the lowrider ranks always pays off, just ask Gene Bare of Cashion, Arizona. Having fallen in love with the culture at a young age, Gene started off building bikes before eventually getting into cars. As he began creating, he learned the foundation of what it takes to truly build a show-worthy Low Low while wrenching on multiple street rides.

He chose a ’51 Bel Air as the canvas of his first masterpiece, and Gene tore the car down and did the majority of the work himself. “I pretty much did everything except for the chrome plating, airbrushing, and pinstripes,” the builder says. “It took me about 10 months to build it.” His ’51 made its show debut in 2005 and won Lowrider Bomb of the Year on its first year out! Every year after that, he kept modifying the ’51 only to take home more and more titles. Yes, indeed, the truck known as “Inferno” was burning up the show circuit. “I took the title four consecutive years and before that, my boys won Trike of the Year,” Gene says.

Unfortunately, Inferno would prove to be a prophetic choice for a name, and not in a good way either. In 2009, Gene was trying to win his fifth consecutive title before tragedy happened. While en route to a show in Los Angeles, Gene was flagged down on I-10 by Quartzsite, Arizona, by another motorist who alerted him that there was something wrong. As they pulled over, the two drivers could see smoke coming out of the enclosed trailer. “It took a while for the firefighters to get there, so Inferno and my trailer burned down to the ground,” Gene says. Luckily, he was able to unhook his truck from the trailer, if not; it also would have burned to the ground.

Reluctant to build another car from the ground up, Gene bought himself a ’62 Impala. “I showed that in Vegas but I didn’t build it; so I didn’t like it because of that. I ended up selling it to someone in Japan,” he says. “I saw this ’54 for sale, and it needed more work than what I would have liked, but I still ended up going all-out in building it.”

Gene was too tired to do all the work on it himself like he did on his first one, so he called upon his friend, Ralph Moreno, to help him out on the bodywork. “Once I got everything, I started assembling it and I got a lot of help from Sergio and Pete Hernandez of the Coachella chapter of Rollerz Only,” Gene explains. The build took Gene around 10 months to finish, and the ’54 was shown for the first time at the Woodland show. The debut was everything Gene had hoped for, and the Woodland show allowed him to qualify for the Lowrider Magazine Super Show in Las Vegas, the car’s final proving ground where it took Bomb of the Year. Hard work truly pays off.

Body/Paint: Gene modified his Chevy by molding the belly, chopping the top five inches, molding the headliner, chopping the trunk and giving it a suicide release, molding the windows, adding suicide doors, and cutting a pitchfork on the roof. After he was done, Ralph Moreno finished off the bodywork. Gene sprayed silver and heavy metalflake and blocked it before Orlando Ceballos of Perfect Color added the graphics and candy. Chavo striped it and Alberto Herrera of Quality Art in Visalia, CA, added the murals.

Chrome: Gene and Brandy Bare did the gold plating while Cadillac Jay and Salas handled the engraving.