Newsletter
Sign Up today for our FREE Newsletter and get the latest articles and news delivered right to your inbox.
Home » 1974 Chevrolet Caprice – El Jefe 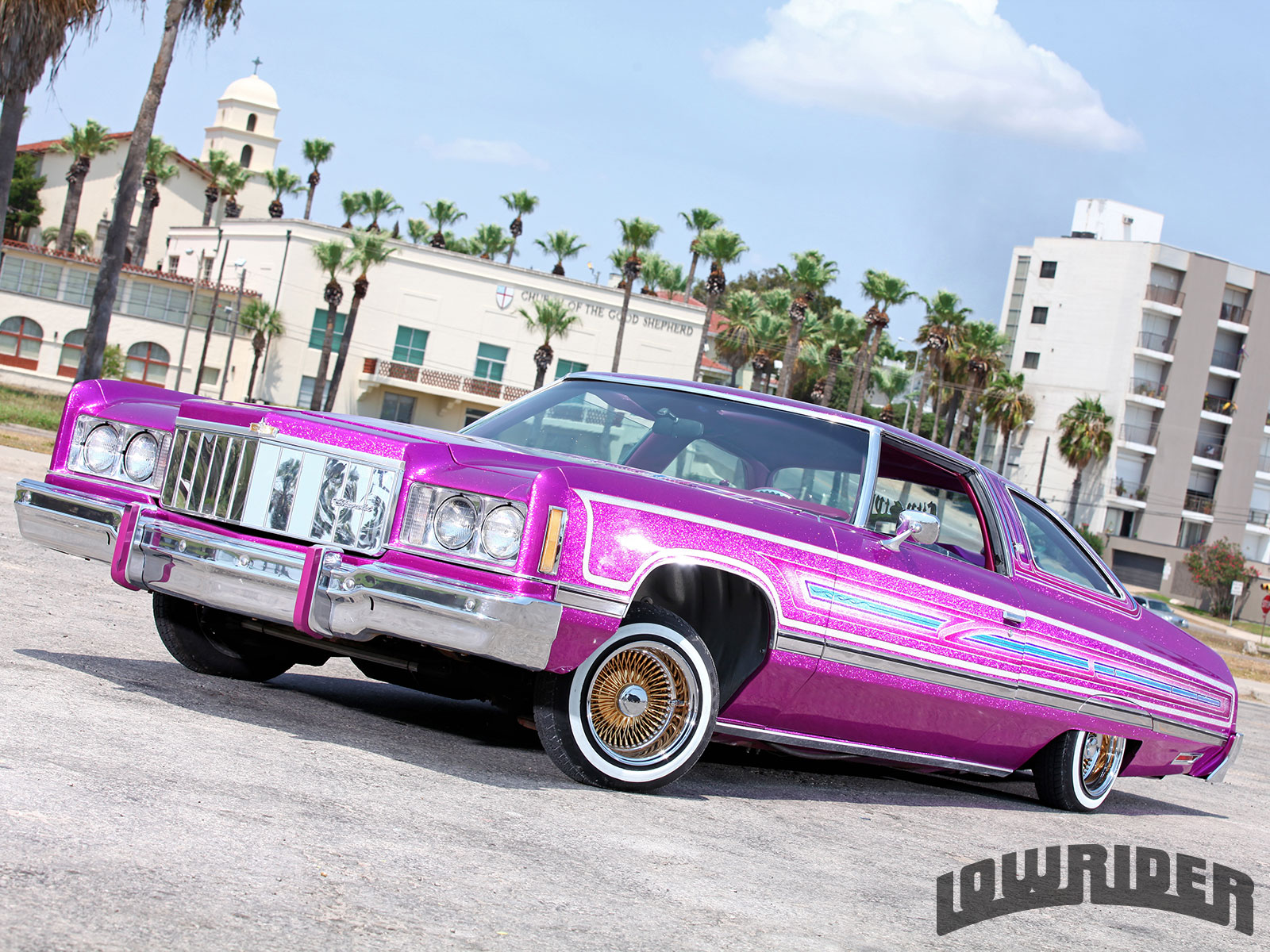 Since retiring, Frank “Pancho” Leal occasionally visits the family-owned Leal Bros Paint & Body business, to see if he can lend his experience in assisting his sons on the custom builds. On one of those visits, he immediately noticed the shop’s newest project; a 1974 Chevrolet Caprice. Pancho has always been partial to the sleek body style of this year model of Caprice, and it brought back memories of when he purchased a new model Glasshouse upon its inception and added custom wheels and ghost patterns. In 1979, Pancho revamped that Caprice with a large flaked fuchsia and multi-color patterned look, and soon this rose-colored Chevrolet was synonymous within the coastal and south Texas Lowrider scene. A decade later, as LRM was reinventing itself, so was Mr. Leal. With his sons in their teens, this father of five established a family focused car club called City Style. Along with a new club, there was going to be a new look for his Caprice; he would turn it into a custom convertible. Unfortunately, the customizing was not successful, and left Pancho with a torn apart car and a regret that lingered for two decades. In time, his focus changed from his personal customizing goals to that of the shop, car club, and family. Most notably, Frank’s flaked paint schemes have become legendary, and his influence is evident in the work that continues to come out of Leal Bros today.

When it was time to refinish the shop’s recent project, a dilemma formed when the younger Leal’s were left with having to figure out who would tell Dad that the car’s owner was requesting a flaked fuchsia paint, much like the one that put Poncho on the map years ago! The elder Leal was none too pleased. “You want to spray my color on his Glasshouse? It will look like my car!” Pancho finally compromised under one condition; he would be involved in laying out the flake without any graphics. This provision was agreed upon and he assisted without prejudice. With Pancho preoccupied with the planning of the car club’s anniversary banquet, he missed the completion and delivery of the custom B-body to the “unknown” owner. Maybe it was for the best, as he had mixed feelings in knowing that a new fuchsia Caprice was cruising the same coastal streets that his former fuchsia Caprice once did.

On July 31, 2010, during the City Style 20th Anniversary awards presentation with his wife, Aurora, of nearly fifty years by his side, Frank “Pancho” Leal got a surprise. Not only was he acknowledged for his lifetime of Lowriding, his influence as a leader and mentor, and his promotion of the positive family structure throughout the local car clubs, there was something more in store for him. The applause soon turned into an emotional celebration, as the venue doors opened and the shop’s recent flaked build was driven into the ballroom and presented to the “now-known” owner, Pancho Leal! The emotional Leal was thankful to his sons and daughter for the gift, and was appreciative in having his retro-paint scheme incorporated into the customized classic. The next day, he no longer had to live in those rose-tinted memories, as Pancho was once again cruising his signature glasshouse down Ocean drive and making new ones. Paz, Tejas

Body/ Paint: Owner’s sons and Arturo Garcia smoothed the body before Freddy Leal and the owner layed out the Fuchsia flake over the silver base. Juan Leal completed the (5) multi-color retro scheme throughout the glasshouse; all work completed at Leal Bros Paint & Body. Pinstripes by Eastwood of Corpus Christi.