Newsletter
Sign Up today for our FREE Newsletter and get the latest articles and news delivered right to your inbox.
Home » 1946 Cadillac Club Coupe 62 Series and 1947 Cadillac Sedan – La Dama & El Catrin 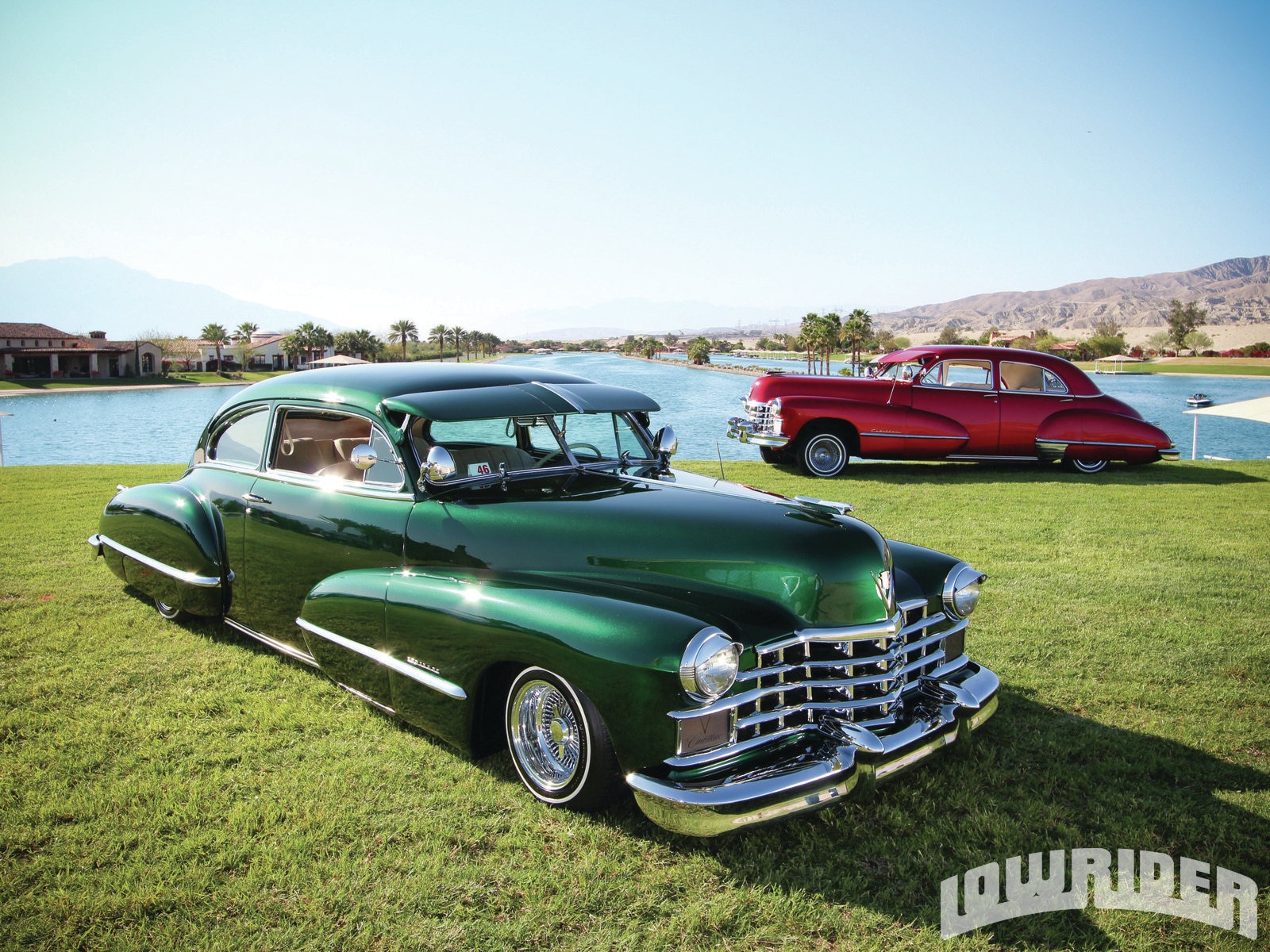 Abel Favela, a legal assistant from the Coachella Valley area of Southern California, just may be one of the luckiest guys on the planet. People always dream of one day owning a classic American-built car, but sadly for most, it will never happen. For Abel, he is not only living the dream but is doing it twice over; owning two clean candy-painted Cadillac bombs – a 1946 Club Coupe and a 1947 sedan! The toughest part about owning these two beauties is just deciding which one to drive every day.

Abel, a resident of Indio, California said the adventure started when his oldest brother, Hector Favela, called him up one day to say he had found the perfect project for him. Hector loves to work on cars in general, but he knew that Abel had a passion for the classics − especially the automobiles of the ’40’s and ’50’s. Abel took the hour-long drive down to Brawley to see this project that his brother spoke of. Abel was familiar with the Brawley area since it was where he grew up, but wasn’t aware of a hidden gem sitting in a trailer park behind a tire shop. There sat a 1947 Cadillac sedan that definitely needed work and some TLC. Hector envisioned what he and Abel could do with it once they got their hands on it. He and the owner ultimately came into an agreement on a price and all Abel had to do was put the cash down. Once the car was in Abel’s possession, he took it over to his cousin’s house nearby and started removing the chrome as it all needed to be redone. Meanwhile Hector started to tackle the engine, transmission, and suspension. Once the Caddy was up and running, Abel brought the Caddy to Indio for the bodywork phase. After all the prep work and paint was done, the ride’s final necessities were tended to, as it was given a new electrical system and a fresh new interior. Local body shop owner, Israel Chavez from Chavez Auto Body, installed the airbag setup allowing the Caddy to slam low or rise up over the speed bumps at a moment’s notice.

With the sedan complete, Abel started taking the car to the local car shows with his fellow Street Kingz Car Club members. The rare Cadillac bomb received a lot of looks and compliments. At one Coachella Valley car show, Abel was approached by a man who claimed he owned a ’46 and a ’47 Cadillac Club Coupe in a junkyard out in Blythe, California. Abel loved his four-door sedan, but the thought of building up and owning a classic coupe would bring things to a whole new level!

Abel and Hector took a ride out to Blythe and sure enough, an old rusty ’46 Club Coupe was sitting in a field of a junkyard, just as the old man stated. Abel seized the moment and purchased the old clunker and had it towed to his house back in Indio. The interior was gutted out and chrome removed so that Eddie Moreno could once again do his magic on the bodywork as he did with Abel’s sedan. Israel, along with Orlando Ceballos from Perfect Kolors in Indio, took on the task of adding graphics and patterns before painting it to perfection in an eye-catching candy apple green finish. Two years to the day and over 20,000 dollars invested, the Club Coupe was complete and just simply looked dreamy.

With the two beautiful rides now complete, Abel is simply sitting on top of the world. He sends out big thanks to his wife for her love and support throughout the buildup of the two Cadillac classics. He also gives thanks to his fellow car club members Israel and Omar, the twins, for putting the rides back together, his two beautiful daughters, and Greg over at the Shadow Lake Estates. Abel says if it wasn’t for his brother’s help, the entire buildups wouldn’t have been possible, so he sends a special thanks to big Hector.

Setup: Israel Chavez from Chavez Auto Body installed the basic airbag setup allowing the ride’s front and back suspension to raise or lower and the flick of a switch.

Body/Paint: Eddie Moreno handled the necessary body and prep work before Juan “Candyman” of Juan’s Auto Body in Indio laid down a silver base with a Hose of Kolor candy apple red finish.