Newsletter
Sign Up today for our FREE Newsletter and get the latest articles and news delivered right to your inbox.
Home » 1974 Chevrolet Monte Carlo – Spirit Runner 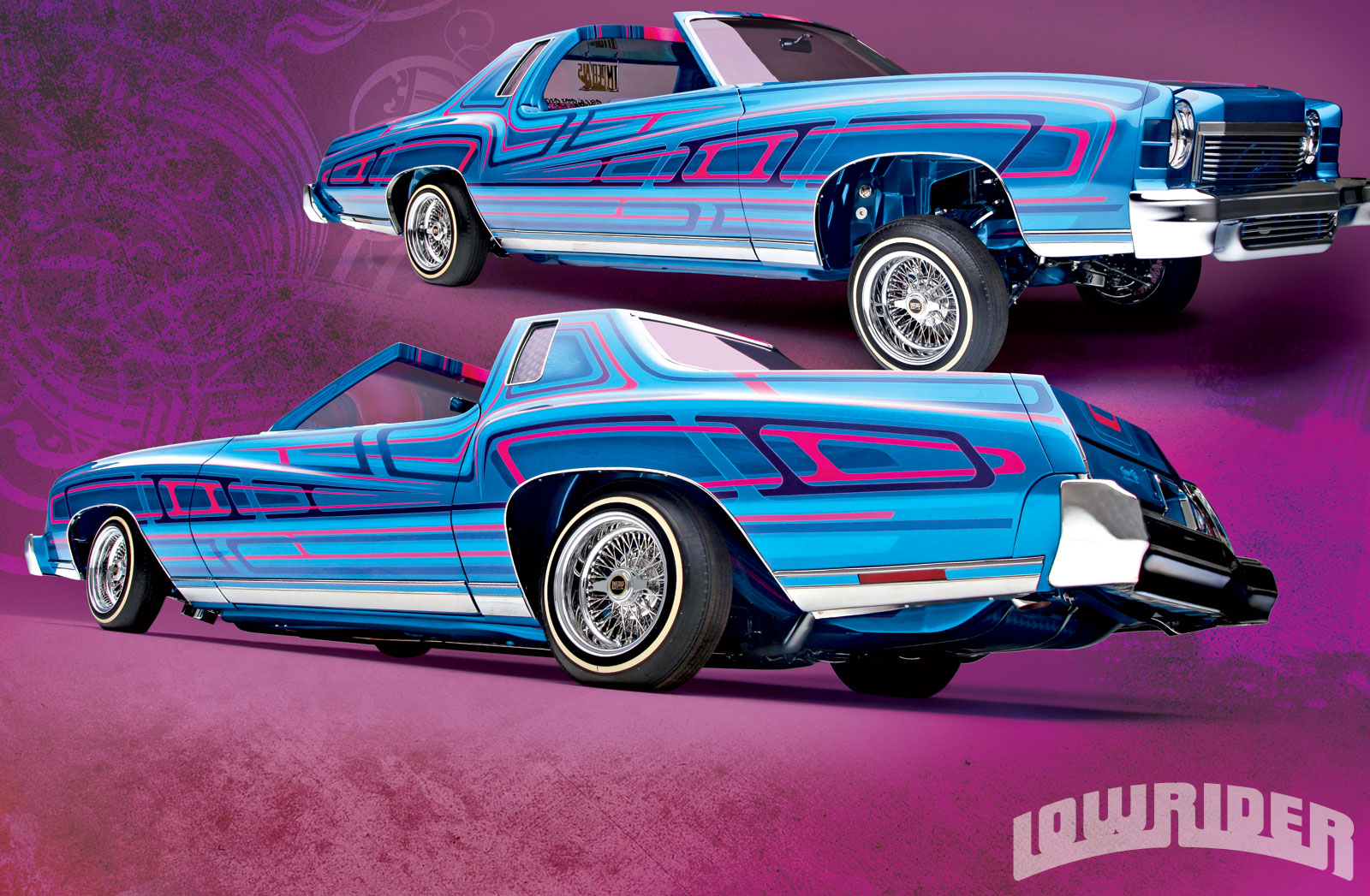 One of the more vibrant Lowriding areas of the mid-1990s was the South Phoenix scene in Arizona; a scene Brandon Gonzalez absorbed like a sponge. Gonzalez, who grew up in Phoenix, made it a point to spend his weekends there as a teenager, soaking in the atmosphere as well as the chrome and candy paint. “I used to go check out the cruises off of South Central Ave.,” Brandon recalls. “It was just something that caught my attention.” Brandon, along with his high school friends, used to roll out every weekend, especially once he reached driving age. By age 17, he had met his future wife, Marina, and they would often cruise together. “Her mother’s house was off of Central Avenue, so I would go out there on Sundays and then we would hit up the cruising spots in my ’84 Regal.” Along the way, Brandon never lost the love for his wife, and he has never lost his love and respect for the Lowrider culture, either.

The ’74 Monte Carlo featured here was purchased from his father-in-law about seventeen years ago. “It took a lot of nagging and bugging him before he decided to sell it to me,” Brandon says with a laugh. “He didn’t want to sell it to me since he had owned the car for a very long time but he agreed to sell it under one condition — that I would take him cruising when it was done.” Brandon’s wife, Marina, used to cruise the car with her father many years ago, and Brandon was more than happy to have his father-in-law in that same passenger seat once the car was restored.

The build-out did not happen right away, however. In fact, Brandon didn’t get serious about the build until eleven years ago. “Since it was the first time that I was really serious about building a car, I dealt with a lot of trial and error,” he says. “The car would sit at a shop for a year, then I would take it to another shop and it would sit again. After a while I figured out whom to take it to and who not to take it to; but that learning process is a part of the lifestyle that we live in.” During the lengthy build, Brandon would get often side tracked with other builds but always ended up selling them to get back on this project.

Brandon originally wanted to convert the Monte Carlo into a clean cruiser. “I just wanted something to have fun in with a nice interior, hydraulics, a sound system and a nice paintjob but it just snowballed from there.” Like many other builds, it only took one minor modification to get the ideas flowing. Before he knew it, Brandon was locked in to take the Monte to the next level. One of the builders that worked on the car happened to be the Phoenix Chapter President of the Imperials Car Club. “Growing up I used to always see Imperials in the pages of Lowrider Magazine but since I grew up in Phoenix, I didn’t think it would be possible to be part of them,” Brandon says. Not only did it become possible, Brandon is now the President of the Phoenix chapter, and he is planning to keep adding to the Monte Carlo’s upgrades! Brandon is grateful for his position in life and for all the help he has received over the years. “I give thanks to the Lord above for all his blessings, and I really appreciate my wife and daughters for all their love and support. I also send my appreciation to Francisco Salazar, Andres Espana, Raymond Terrazas, Ralph Gutierrez, Greg Belarde, Eugenio Banda and Eddie Lopez, may you rest in peace as you look down on us.”

Interior: The trunk and seats was stitched together by Felipe’s Upholstery, while Eugenio “Fish” Banda Jr. of Fish Designz in Avondale, AZ did all the fiberglass work that includes the custom dash, floor, headliner and custom console. Darion Land and Regino Cota helped Fish out with the interior’s build. LED lights and custom chrome cut outs by Krazy Kutting were installed throughout the interior.