Newsletter
Sign Up today for our FREE Newsletter and get the latest articles and news delivered right to your inbox.
Home » 1941 Chevy Deluxe Coupe – Greengo – The Sequel 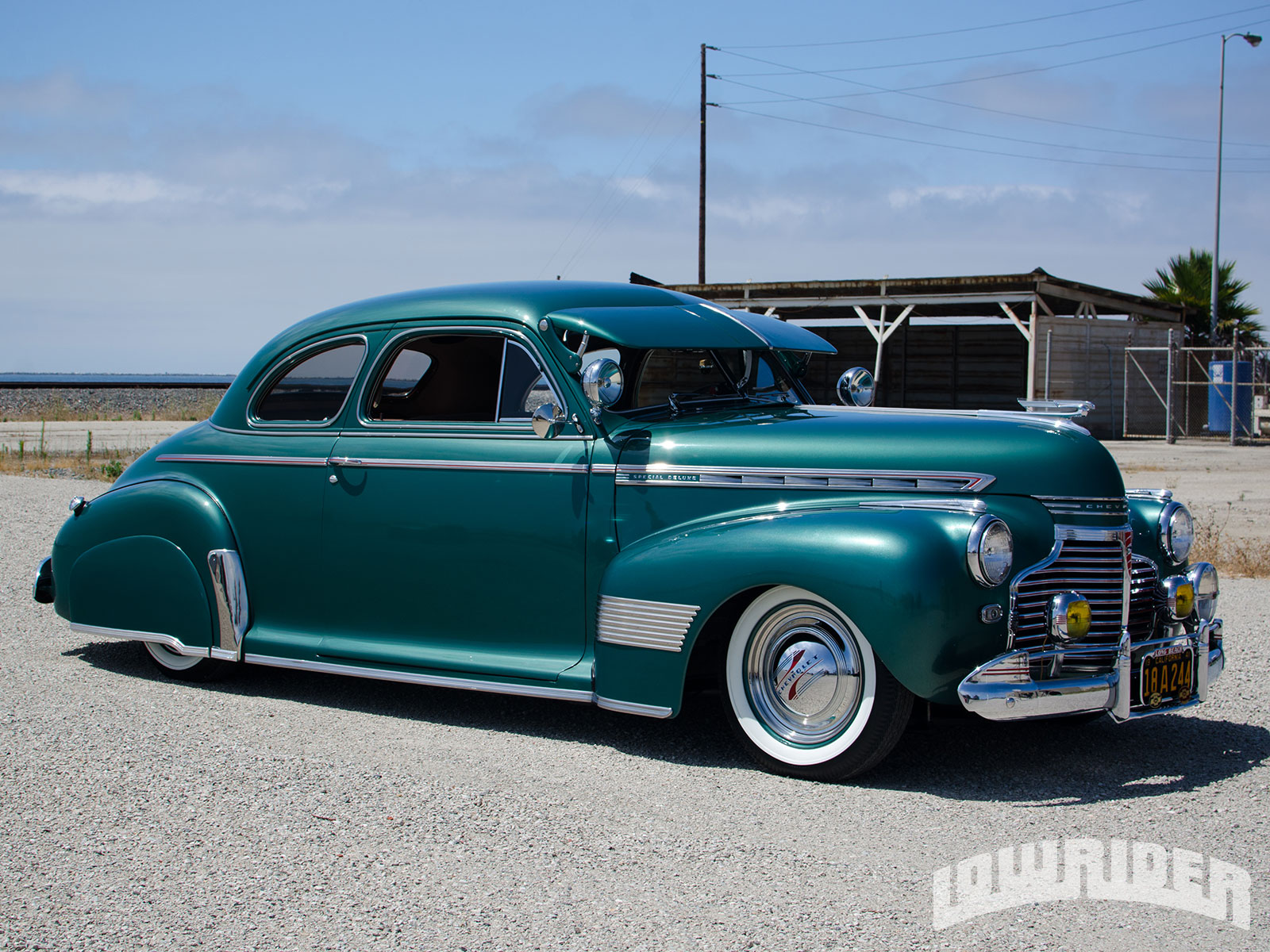 Having been previously featured in the pages of LRM, Richard Floyd is no stranger to the Lowrider world. As a die-hard member of HB Gabachos, a club also frequently seen in our magazine coverage, Richard and his fellow club members have built some of the best Chevy Bombs to ever grace the pages of this magazine and the streets of Southern California.

One of the cars Richard previously built that caught our eye was a 1949 Pontiac Streamliner; a project he finished in December of 2010 that we featured in our June 2011 issue. It was not long after the car was featured that his friend, Denny Cissell, wanted to buy the Pontiac for his wife. Richard had originally built the Pontiac for his own wife, Rhonda, but with a magazine feature under his belt, a nice offer from Denny, and the okay from Rhonda, Richard let the car go. The sale left Richard with cash in hand, so the search for a new project for the Floyd family began. Richard turned to his good buddy and fellow HB Gabacho, Jim Ramsey, for guidance. He mentioned to Jim that he would love to build a coupe like Jim’s 1938 Chevy coupe that was featured in the February 2011 issue of LRM. During a road trip back from the 2012 Turlock Swap Meet with Jim, fellow HB Gabachos member Mike Welch called and mentioned to the duo that his ’41 coupe was for sale. It should be noted that Mike is a member of the Southern California region of the VCCA (Vintage Chevrolet Club of America), so Richard knew he kept the coupe very close to stock condition and that it was a 100-point car. With a handful of full restorations under his belt that seemed to take forever, Mike’s ’41 was the exact type of car he was looking for. Richard and Mike made plans to meet up that same weekend on Sunday at the Long Beach Veteran’s Stadium Swap Meet, in order for him to take a closer look at the car.

Given the condition of everything, Mike had a majority of the ’41 accessories but was not running them on the car as he had planned on selling them separately. If you are familiar with the HB Gabachos, you know they always run accessories on their cars so it was no surprise to Mike that Richard wanted to buy the car with all of the available accessories. Richard shared his vision for the couple with Mike and they struck a deal for the car and the accessories. By early Monday morning, Richard was already on the phone with Joe Epstein of Epstein’s Muffler in Montebello, California. Richard let Joe in on his latest purchase and the vision he had for it. The build was set to begin!

Not long after their Monday morning conversation, Richard dropped off the car at Epstein’s so Joe and his son, Frankie, could start the transition. Initially, the ’41 needed a proper lowering and exhaust tune, so Joe and Frankie lowered the coupe, added the straight pipes, and gave the Fulton visor a proper stance. The duo then added all of the accessories that were not on the car. The wheel skirts, fog lights, passing light, skirts, compass, view finder, tissue dispenser, column fan, hat holder, vanity mirrors and king bee mirrors were all installed at Epstein’s.

With the car taking shape, Joe called on master Bomb builder, Tutu from La Puente, California, to add the spotlights to the Chevy. While the car was at Epstein’s, another Bomb master, David Franco, stopped by with a very nice red head flashlight to finish off the steering column. Mike Welch was already running some accessories such as the GM locking gas cap, bumper wrap-arounds and the trunk guard pull down, so there was no need to hunt for these items or have them installed.

A couple of months after the transformation was completed, accessory guru Mike Ramos came up with a set of ’41 deluxe wheel disc rings to finish off Richard’s ’41 Coupe transformation. With the long list of accessories already listed, you would think Richard would be satisfied with the coupe, but he insists there are still things he needs to add; he is on the hunt for a deluxe steering wheel, center arm rest, and an exterior thermometer.

Richard and the coupe have already attended a few shows and cruise nights and naturally, the duo has garnered quite a bit of attention, including ours here at Lowrider Magazine. With such a consistent list of great builds coming from Richard and the HB Gabachos, there was no question we had to feature the coupe for our readers.

As with most builds, there are a few people that need to be thanked. Richard would like to thank Mike Welch for the opportunity to own the coupe. Joe & Frankie Epstein, Tutu, David Franco, Mike Ramos, Jim Ramsey, Don Pearson, The Manis Family, his children Alyssa & Austin, and his club HB Gabachos all receive Richard’s sincere gratitude. Richard would like to give a special thanks to his wife, Rhonda, who supports his love of Lowriding and fully supported his decision to sell the car he built for her. We have a feeling that the coupe is going to stay in the Floyd family for a while. Richard’s children are already claiming ownership of the coupe! Get in line kids, mom needs to cruise it first!

Suspension: Fatman Fabrication drop spindles in the front and de-arched leaf springs and air shocks in the rear. All work performed by Joe Epstein, of Epstein’s Muffler, in Montebello, CA.