Newsletter
Sign Up today for our FREE Newsletter and get the latest articles and news delivered right to your inbox.
Home » 1968 Chevrolet Impala – Krazy 8 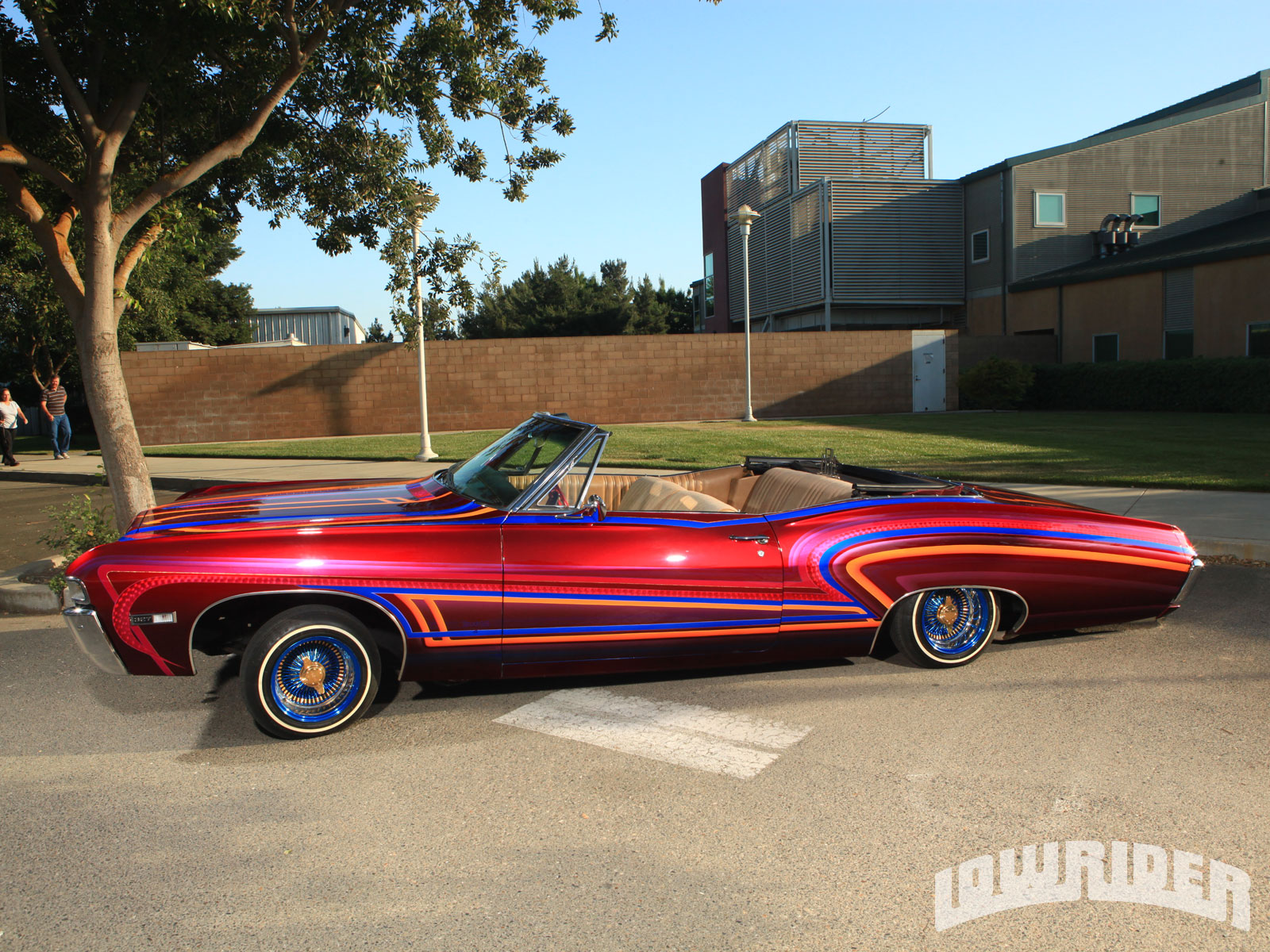 Doug Vigil, who is no stranger to the Lowrider scene, purchased this ’68 convertible from of a friend ten years ago. His intentions for the ragtop were honorable; he wanted to build it for his wife, Suzy, who has constantly supported Doug and his Lowrider lifestyle. With motivation behind him, he also had an arsenal of spare parts at his disposal, thanks to his ’64 full-show Impala, appropriately named, “Heavy Hitter.” You see, Doug had changed “Heavy Hitter’s” look so many times he had a ton of parts with which to customize his wife’s dream ride, a build that began with Horacio, of Kreative Koncepts in Modesto, CA, painting the ‘68 ragtop with a House of Kolor candy red. After some work, the ’68 was a more than worthy streetcar, but apparently destiny had bigger plans for it. One day as the car sat in the garage, roofers came to Doug’s home to replace the roof shingles. Without alerting Doug or anyone else at the home, the roofers started to work. A palate full of roof shingles was dropped on the roof of the garage directly above the ’68, and the impact made the garage shake, knocking down a light fixture that landed on the car and chipped the paint job in the process! “I figured that it would be cheaper to add patterns to the car than to repaint the whole thing,” says Doug, who took the news in stride. Doug went to veteran painter, Buggs, in L.A. and told him what he liked and what he didn’t like. “I told him that I wanted to split the car with one side having new patterns and the other side old school patterns.” The car split didn’t stop at the paint; Doug split the trunk by keeping the one side old school with the Andy’s fender-stone black pump and Zappco amps, while the other is a new school design, complete with a Reds chrome pump with hard lines and a new digital Arc Audio amp. “The interior is also going to be done but I just don’t know when, since I’m working on a ’57 Bel Air convertible and the wife’s ’64 wagon.” With his hands full of projects, Doug would like to thank his wife for her support, and he sends his appreciation to Tony at Solar Reflections, Demetrius, Mike Cajio, Art Audio, Buggs L.A., and Horacio of Kreative Koncepts.

Body/Paint: Kreative Koncept in Modesto, CA painted the ’68 with a House of Kolor Candy Red. From there, Buggs of LA added multiple patterns with a variety of House of Kolor paints.

Interior: Caslio, of Modesto, CA., stitched together the custom interior.

Chrome: Mike, at New Age, in Fresno, CA., did all the chrome.