Newsletter
Sign Up today for our FREE Newsletter and get the latest articles and news delivered right to your inbox.
Home » 1962 Chevrolet Impala Convertible – Only The Strong Survive 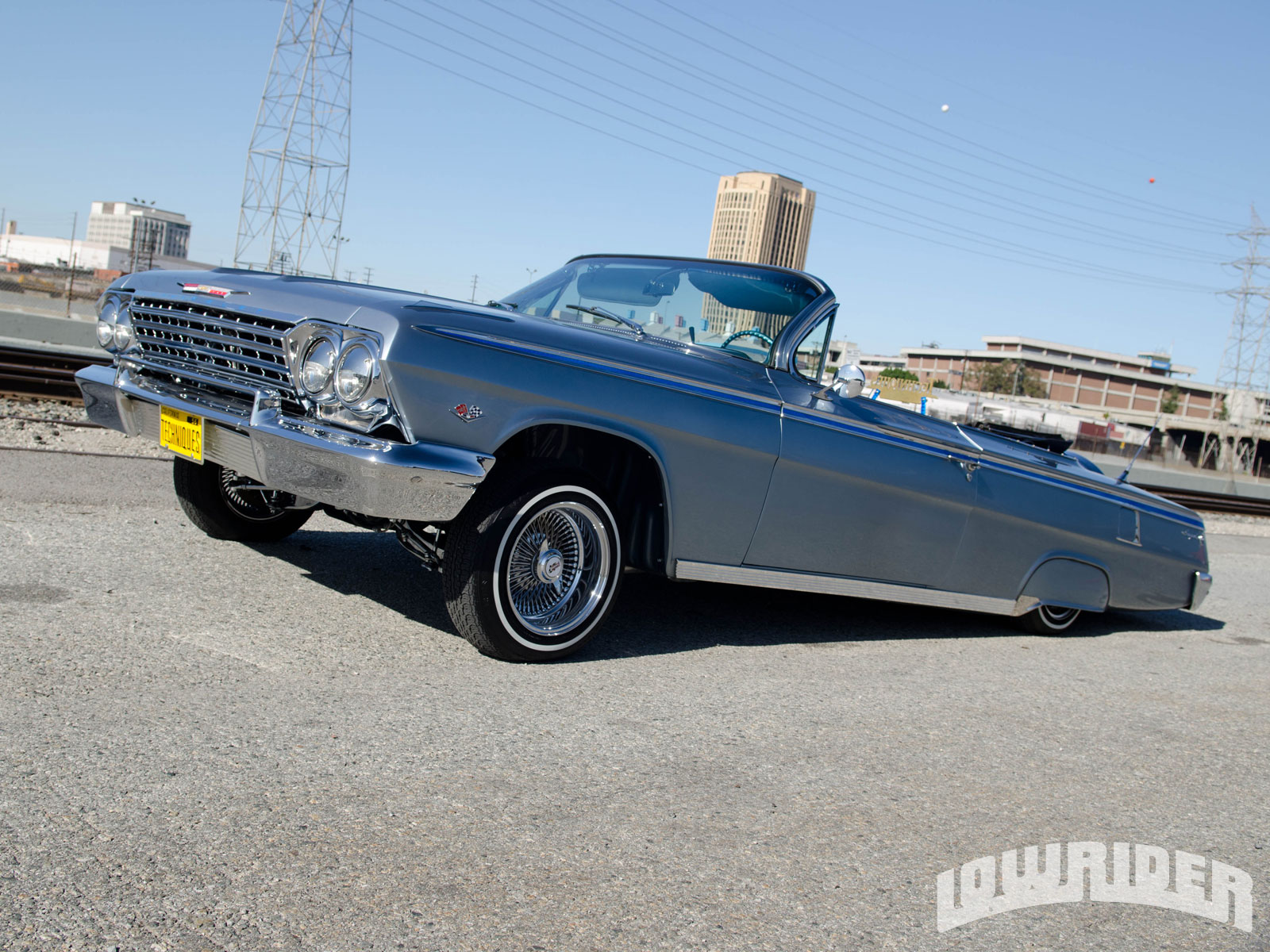 The phrase, “Only The Strong Survive,” is one that can apply to a great many things in life, even Lowriding. In our culture, the quote can be used to describe the trials and tribulations car clubs and individuals go through in search of Lowrider perfection. It takes a lot of time and effort to keep a car club going, so car clubs come and go and in the end, only the strong survive. In the garage, it may take years to complete a car due to building time, the amount of investment money involved, and motivation. Often times, builders lose interest in building their car and get rid of them in favor of other projects. In some cases, builders are so mentally exhausted from the builds, they get rid of their dream machines because they are simply over them, and sick of looking at the car that has consumed months or even years of their lives. Not so, in the case of the pristine ’62 you see before you, built by Marcello Sanchez, Jr.

Marcello Sanchez, Jr., a Baldwin Park, California native, has been Lowriding since his days as a youngster. Over the years, he has built a few Lowriders; including a 1962 Chevy Impala hardtop, 1960 Chevy Impala convertible, 1948 Chevy Fleetline and a 1973 Chevy Caprice Classic. After building all of these Lowriders, Marcello has only kept one ? the 1962 Chevy Impala you see in the accompanying photos.

Marcello found this particular sixty two in El Monte, California in the year 2000. The seller had it stored in a warehouse for a few years. Marcello paid the asking price and brought it home, promptly putting it in the garage where it waited patiently. Marcello was working on other cars and would find time to work on the ragtop here and there. After 8 years, Marcello decided that he was going to concentrate on the Impala and leave any other projects waiting in the wings. He took one year and restored the sixty two to his standards, ultimately naming the Impala, “Only The Strong Survive,” since this was the only car that he has kept in all his years of Lowriding.

Marcello has been a member of Techniques Car Club Los Angeles since 1997. While he was working at a local Chief Auto Parts (now know as Auto Zone) store, he met Peter Cruz and Ruben Quinonez from the club. They asked him to join the club and Marcello became a member and has been an active and strong standing member since then. Marcello would like to thank his family and fellow Techniques Car Club members for their love and support over the years, as well as their input and help in his latest build. We would also like to congratulate him on a great build, and send our best to Techniques Car Club as well, as they are poised to celebrate their 40th anniversary in 2012. I guess what they say is true; “Only the Strong Survive.”

Nick Name: Only The Strong Survive

Interior: JR, from JR’s Upholstery in East Los Angeles, redid the interior in the original material and design and made sure it matched the exterior of the Impala.

Engine: Joe and David, from Baldwin Park, California, rebuilt the 1962 327ci engine. Marcello added an Edelbrock 4 barrel carburetor and tons of chrome to the powerplant. The 350 Turbo transmission was left stock. Marcello added 8″ dual glass packs to expel all of the exhaust fumes from the 327.

Suspension: Joe from Joe’s Air Suspension in San Bernardino, California added a custom air bag set up in the Impala. The chrome tanks and air compressors are housed in the trunk of the sixty two. Joe and David, from Joe and David’s Suspension in Baldwin Park, California, restored and freshened up the frame. Marcello had the frame powder coated and added disc brakes and front and rear chrome suspension. Jesus, from Jesus’ Chrome Shop in Long Beach, California, took care of all the chroming on the Impala.