Newsletter
Sign Up today for our FREE Newsletter and get the latest articles and news delivered right to your inbox.
Home » 1963 Chevrolet Impala – El Rey 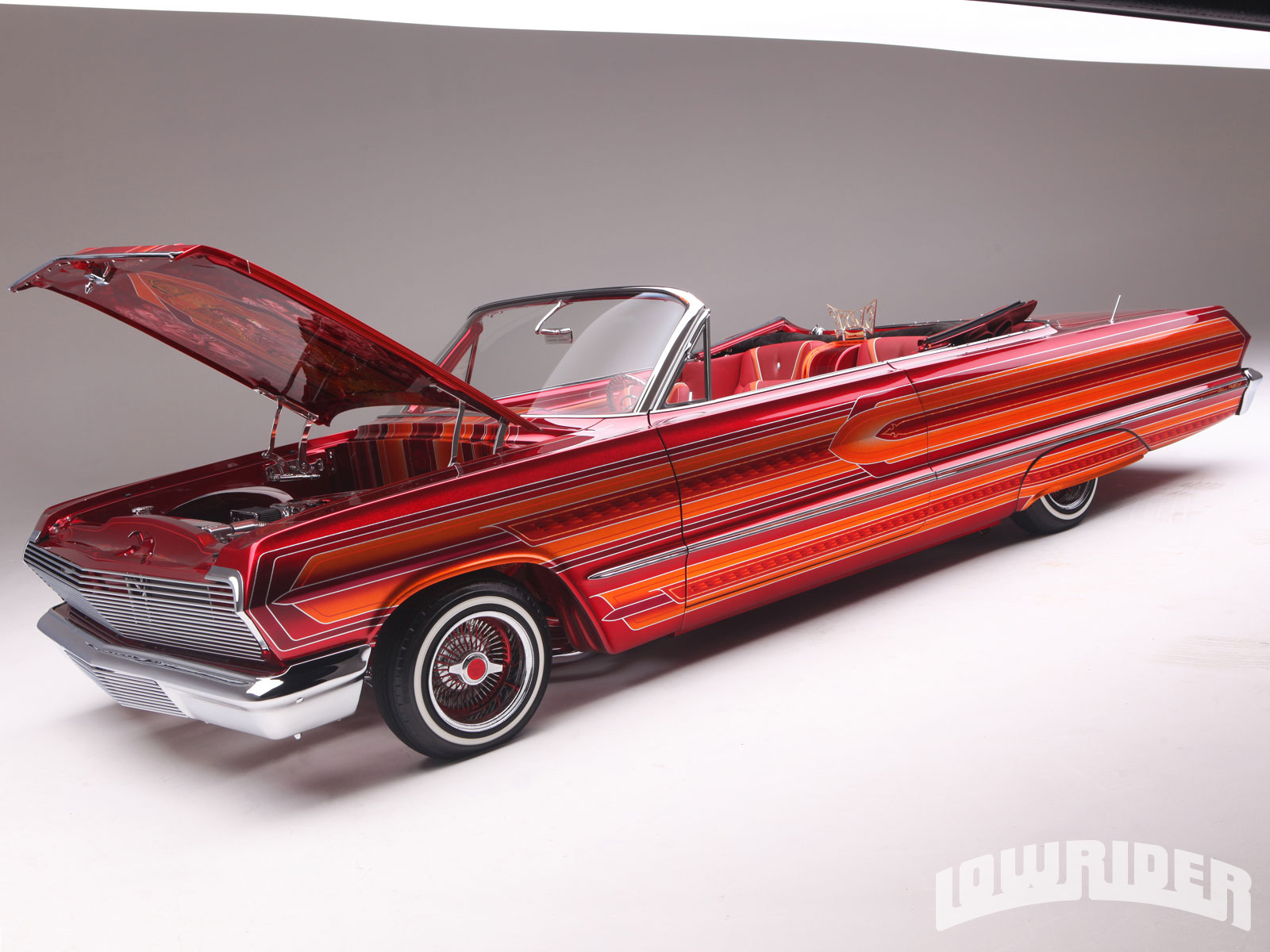 With each passing year, something new makes it way onto the show circuit and pushes the boundaries of what was previously thought possible. During the show season as winter turns to summer back to winter, a few vehicles stand out amongst a sea of wires and flake. Those that manage to make it to the top all have a common goal, to be named Lowrider of the Year. Welcome to the top, “El Rey.”

When car owner Albert de Alba arrived at the 2011 Los Angeles stop of the Lowrider Show series, it was as if the days gone by had taken the modern world by storm. “With the internet today, everyone is showing their stuff before it’s out there. I wanted to keep it old school and hit people with the element of surprise. I had people calling me the week before, hearing that I was going to premiere it at LA., and it reminded me of the old days when you heard rumors of a vehicle before ever seeing it,” explained Albert. As his 1963 Impala Rag made its way from the trailer across the show floor, the crowd was abuzz with whispers of “oohs” and “ahhs” and predictions of a future show winner. The awards ceremony confirmed the predictions, as a sweep of the trophies only proved that El Rey wasn’t just another ’63; it was something truly special. Fast-forward to the Vegas Super Show and once again the crowd stood with their mouths wide open, and not without reason.

El Rey is a testament of how far the Lowrider scene has evolved. The undercarriage of the car is equally as impressive as the outside with every weld and hole molded within a reinforced frame. The undercarriage is also frenched, painted, and patterned to match the outside to a tee. In essence; what isn’t painted is chromed and what is chromed is more than likely engraved. Albert explains how his attention to detail evolved, “My dad always kept me interested in the Hot Rod world. To him, [for a car] to be considered custom, it has to have shaved door handles, a frenched antenna, and shaved emblems.” Albert went way beyond a few tricks of the trade though, starting with the center mounted dash. “Originally my intention was to only repaint the car. At the time, the Corolla came out with all the gauges in the center and when I saw that, it blew my mind. It gave me a vision of recreating that look using a ’63 dashboard. Also, I wanted nothing on that dashboard. Not a stereo, not a knob, nothing,” Albert explains. “Once I finished it, the rest of the car evolved because it flowed so perfectly with the center console. I wanted to have a hardcore custom Hot Rod in a Lowrider’s clothing. I wanted to stay true to my nature of metal flake, candy, 13 wires and hydraulics,” says the Lowrider veteran. “It was not my intention to set out to build a champion vehicle for the title, I wanted the car to be a testament to me and what I’ve learned in my building abilities for the last 23 years. It was pretty much was a self-challenge.”

Countless hours went into creating a look that is simple and clean. A lot of the detail isn’t in what you see, but what you don’t see. “The battery for the vehicle and the brake booster for the master cylinder are under the dashboard. I wanted the motor to look like it was floating. You also can’t see any brake, fuel or hydraulic lines on the frame. Everything is concealed within the vehicle cockpit and that was all done to make sure all the cleanliness and craftsmanship stand out,” explains Albert.

While the mods may scream Hot Rod, the paint is pure Lowrider. With a combination of candy reds and golds mixed in with flake and patterns, there’s no mistaking this for a factory finish. “There wasn’t a set plan for the paint, just a roll of tape, my hand, and the right type of music playing. I did the hood the first, later on the trunk, and then I painted one side and copied it to the other. The belly is a set of patterns all its own. It’s a similar flow, but different than the outside yet I still used the same colors. It’s not a mirror image, just a resemblance.”

As the wins stack up and the trophies accumulate, Albert feels a higher cause to his accomplishments. In addition to a personal satisfaction, there is a sense of breaking down barriers for the entire Lowrider community. “I didn’t build the car just for myself, my car club, or my shop. It’s to represent our whole community of Lowriding. When I won at SEMA or the Grand National Roadster show, the win wasn’t just for me or Elite car club, to me the win was for all of us. A lot of people that weren’t into Lowriders told me it wasn’t their style but they really appreciated and respected the hard work and detail that went into it. It made them see past the stereotypes of Lowriders to become more aware that we are just as crazy and serious with our vehicles as they are with theirs. We christened the vehicle with live mariachis playing “El Rey.” A lot of the people in Lowriders will never forget it. It wasn’t only a special event for me. It was something we all shared together,” Albert says with a beaming smile.

A true custom is never finished and when Albert was asked if he was done with the car or if there would be more mods in the future he jokingly stated, “Hell no, I’m not redoing the car! I overachieved what I expected. For once I’m 110% satisfied.”

Albert would like to dedicate the car to and thank Luis Padilla, former owner and father-in-law, Roberto De Alba, Guadalupe Reynoso, Enrique “Kique” Grijalda, his Pops, his brother Mario Jr. (my mentor), Greg and Adrian, Little Al and Beto, and his wife, Lorraine De Alba.