Newsletter
Sign Up today for our FREE Newsletter and get the latest articles and news delivered right to your inbox.
Home » 1967 Chevrolet Impala Convertible Supersport – Viva New Mexico 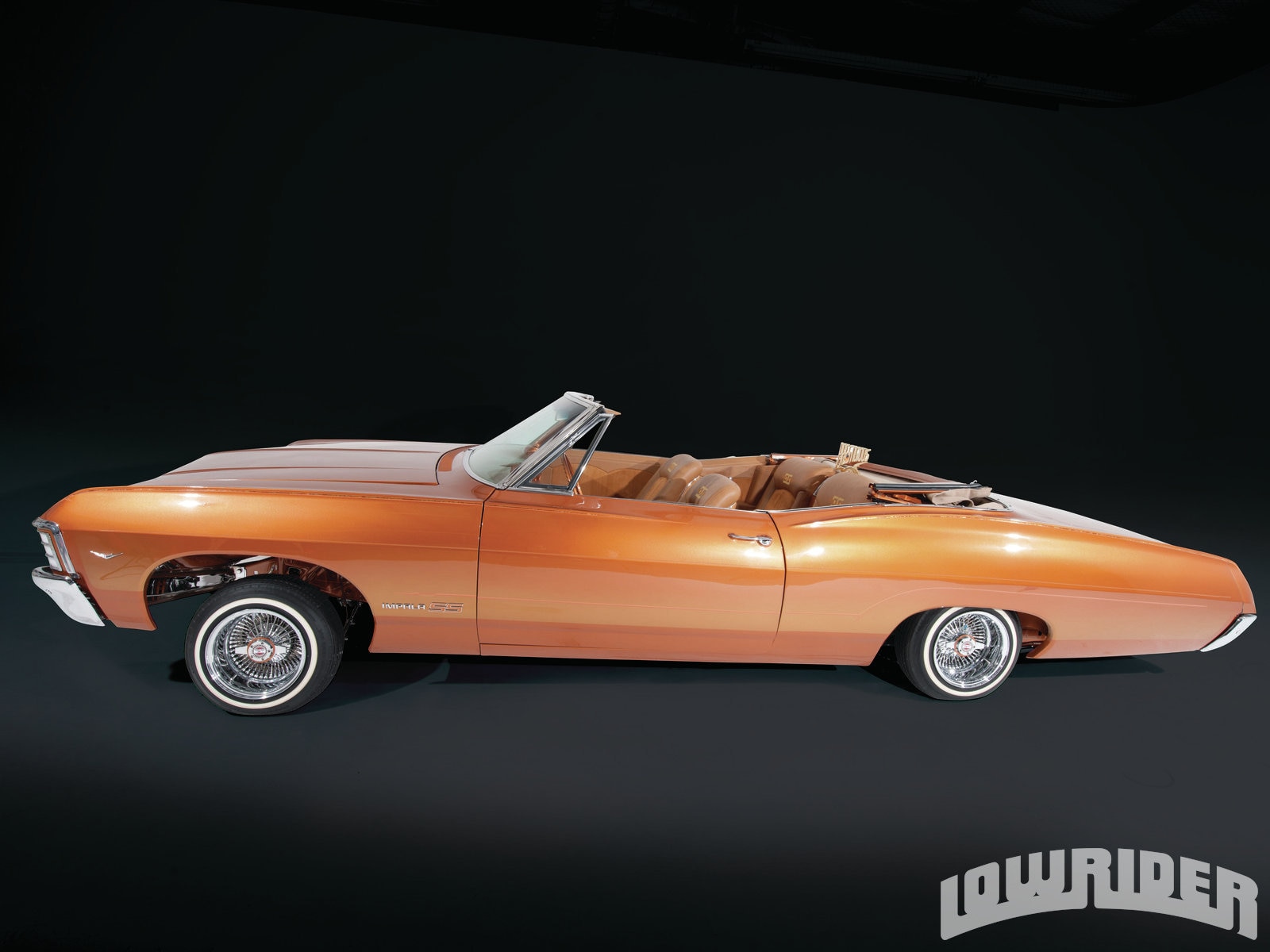 Fred Rael of Espanola, New Mexico is a time-tested and true veteran of Lowrider culture. Naturally, it takes a lot to impress a man who has been around the culture for nearly forty years, and he has tailored this exquisite ’67 Impala Supersport Convertible accordingly. For Lowriders, the love is in the details, and Fred believes this wholeheartedly; which is why he isn’t afraid to take cues from other genres, either. “You look at guys like Chip Foose and see that sometimes adding the most subtle details can really set a car off,” says the man from Espanola. “The amount of creativity in our sport is what makes it interesting, and I just wanted to build something unique and classy.” Setting out to innovate, rather than duplicate, this founding member of Prestigious Car Club gave this late ‘60’s cruiser an identity of its own steeped in classic Impala tradition. After years of service to Lowriding, Fred needed to make his mark, and his journey to perfection has been a long one.

Born in a small town in northern NM, it was a family move to Los Angeles that gave the young Fred his first exposure to Lowriding. The family relocated back to New Mexico in ’76 and his career officially began with a Super Beetle in 1979. “I put some Rockets and 5.20s on it, and there was a picture of it in a VW magazine in 1980,” says a proud Fred. From there his car ownership continued, and this owner of “Liquid Sunshine” has had almost everything under the sun, literally. “I had a‘70 LTD, a ‘73 Super Beetle, and in the early ‘80’s I had a ’74 and ’75 Caprice Classic, a ‘70 Cutlass, and I bought my first Impala in ’85,” he says. This Impala was a ’67 Fastback, and he bought two more before buying this ’67 Convertible in 1989. It sat for six years before he began work on it. In the meantime, he kept building, with a ’64 convertible in 1993 that was featured on the cover of Orlie’s, in addition to a ’76 El Camino, an ’81 Cadillac Coupe Deville, an ’86 Cutlass, and a ’94 Fleetwood. With experience in a variety of makes and models, Fred dug deep into his bag of creativity when it came time to build the perfect ’67 Impala Convertible.

A member of Prestigious Car Club since 1993 (back when it was known as Prestigious Few), Fred and his fellow car club members began working on the ’67 in the club’s shop. His love for the body style had simmered for years, and he knew he needed to do justice to the build. “Before I bought my first Impala, there was a guy in town who had a ‘67 and it was just so different and unique; I loved the lines on it. The style grew on me and while everyone liked the ‘62’s, ‘63’s, and ‘64’s, I wanted to build my ’67,” he says. With the help of his son, Anthony, a Vice President of Fred’s Espanola-based chapter of Prestigious C.C., his fellow members, and some other key builders, all of the work was completed at Fred’s shop. “I really have to thank everybody because they came to work on the car at my shop; I didn’t have to take it anywhere,” says Fred sincerely.

The car was given a clear coat base with a Daytona Sunset Orange finish and gold leafing, while Angelo Maisano also gave the car some gorgeous pinstripes. The car’s original 283 engine was rebuilt by Knightons of Albuquerque, NM, and Fred smoothed out the block and color-matched the engine, painting the tranny to match. Engine parts came courtesy of Summit, and Fred had help from Manuel Vigil in rebuilding the rear end. Perhaps the most radical and innovative aspect of the ’67 is its custom interior, an idea Fred executed perfectly. “I used to own a ‘50’s diner here in Espanola, and a man gave me a ‘59 Bel Air which I split in half and used as décor for the restaurant. I closed the restaurant about 15 years ago but the dash had been sitting at my house ever since.” The sitting dash gave Fred a great idea. “There are things I really like about the ‘67 and there are things I don’t like as much, and the dash is probably the least impressive,” he says. Naturally, Fred took the dash from the ’59 Bel Air and cut and molded it to fit in the ’67, but he didn’t stop there; he also split the rear seats and built a console that stretches from front to back! “I wanted to keep the ‘60’s feel to it but add my own twist,” he says. He color matched the gauges and had Pete from Innovations add a mix of suede and leather to cap off the interior. For his hydraulic set up, Fred put together a Prohopper hydraulic set up complete with LA Series fat blocks, 8 inch cylinders up front and 12 inch cylinders in the back, 3 ton coils up front, 1 ton Cadillac coils in rear, with Adex dumps up front and GForce dumps in back. He also chromed and color matched the springs and undercarriage, with polishing done by Millennium polishing. Fred capped off the build by installing his own audio set up and fitting Coker 5.20’s onto 72 spoke Daytons.

“Liquid Sunshine” made a huge impact for Fred on the Lowrider show circuit last year, hitting Phoenix, Denver, Vegas, and Pueblo and taking home some awards in the process. “I got 2nd place Best of Show in Phoenix, as well as 1st place Radical ‘60’s Convertible, and Outstanding Engine. In Denver I got 2nd place Best in Show, Outstanding Interior, and 1st place in Full Custom Convertible. At the show in Vegas, I took home 2nd place ‘60’s Full Custom, losing to “Summer Madness,” and there’s no shame in that,” says Fred with a humble laugh.

Citing his son, Anthony Rael, as his biggest inspiration, Fred is very proud of how the car turned out. “He encourages me to take that extra step; he’s influenced by the way things are done now and the way the sport has evolved,” says the proud father. Fred wishes to thank Terry at Big Wheels for helping to rebuild the car’s brakes, Manuel Vigil for rebuilding the car’s rear end, and Eli Martinez, owner of Extreme Twist and Collision for helping to guide the build with his paint insight and connections. He also sends credit to Angelo Maisano, Millennium Polishing, Leroy Martinez from Discount Auto Glass, Innovations Auto Interiors, and all the guys from Prestigious Car Club who helped out with the build. “I can’t thank them enough for coming to the shop so I didn’t have to take the car anywhere,” he says. The solidarity of Prestigious Car Club is also not lost on Fred. “It takes an army to set up a car like mine at the shows, and I appreciate what they do; they really come through.” As a veteran of Lowriding, Fred is excited to see how the sport will continue to evolve and for the younger builders out there, Fred stresses the virtue of patience. “It takes me time to make something nice; I don’t rush my projects. I think kids now want something faster and sometimes that is actually hurting our sport. It’s cheaper and easier to have a newer car and put 20’s on it so you can have something to cruise this summer, but remember, it takes time to build a special Lowrider.” Amen to that, Fred.